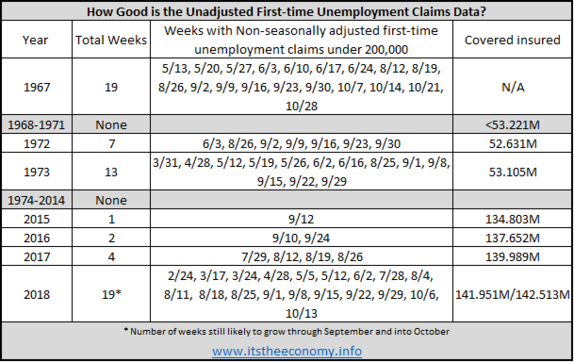 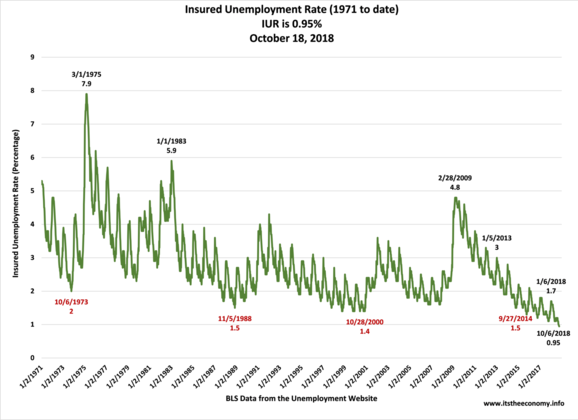 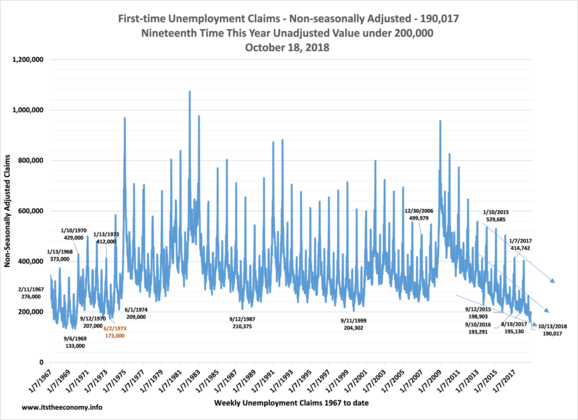 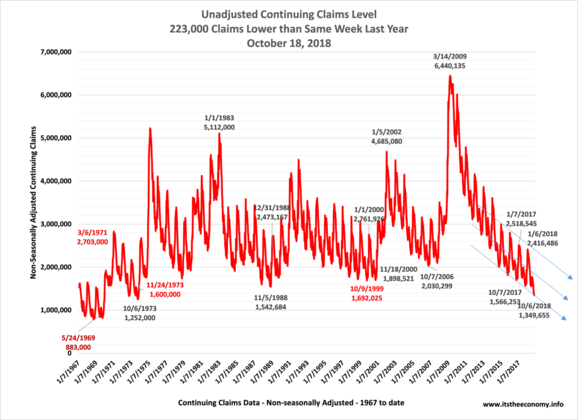 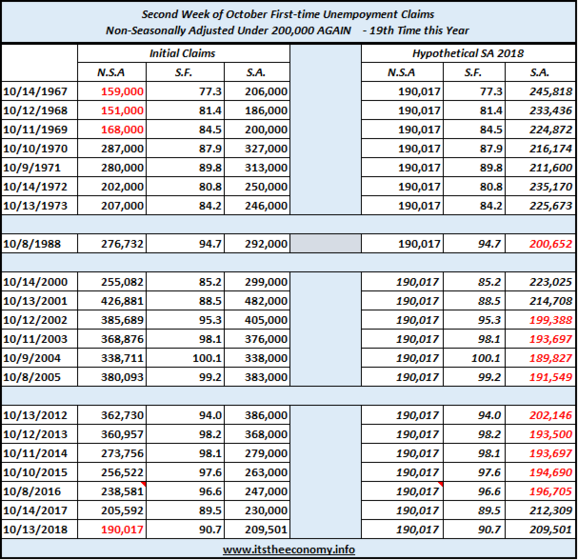 Weekly unemployment claims have been declining since 2010. The headline number is the seasonally adjusted (SA) First-time Unemployment (FTU) claims data. A second number that is being recognized in recent reports is the SA Continuing Claims (CC) number. The real story is the the non-seasonally adjusted (NSA) FTU claims and NSA CC claims data. We have had numerous stories regarding the Seasonally Adjusted First-time Unemployment Claims Streak FACT that started under President Obama. This FACT was a consecutive weeks streak of SA FTU under 300,000. A FACT is a False Assertion Considered to be True. The Unemployment Streak is an Economic Urban Legend.The streak did not start when they said it did, nor has it continued unabated. The streak should have been reported as ending during November 2016. The data that has been actively ignored is the number of weeks this year with NSA FTU claims under 200,000 claims. This year we have had 18 weeks with NSA FTU Claims under 200,000 claims. The most number of weeks of any year with under 200,000 NSA FTU was 1967, the year that the unemployment benefits program began. Another piece of data that has been actively ignored is the percentage of the workforce receiving unemployment benefits, the IUR. The IUR has dropped below 1.0% for the first time ever during September of this year.

First-time Claims recorded a drop of 4.59% to 190,017. This drop in the non-seasonally adjusted claims was the lowest record for this week of October since 1969. Last year we saw an unexpected drop to 205,592. This year it was thought, based on strong hiring news, that the claims data could drop up to 10%.

Nineteen weeks with First-time Claims recorded under 200,000. We have tied the record for the most number of weeks during a calendar year where the non-seasonally adjusted first-time unemployment claims data was recorded under 200,000 claims for the nineteenth time. We have only done this one other time during the past 51 years, and that was the first year of the program's existence. Here is something to keep in mind with this data and all the other data: We have 142 million "covered insured" workers this year. We only had 53.2 million covered insured during 1971, the first year that for which the data is available. Put another way, we had 39,000 more first-time claims this week for 89,000,000 more workers. One more thing to consider on this particular point: When we had 19 weeks under 200,000 claims during 1967, there were four weeks of NSA FTU claims under 200,000 during the month of October. We have had two weeks this October with NSA FTU under 200,000. We have two more weeks possible where we could see NSA FTU claims under 200,000.

Continuing Claims recorded a drop, week to week, again. There was a question, earlier this year, regarding how low could this value fall.Would we drop below the November 5, 19888 value of 1.542 million. Then the question was would we drop below 1.3 million claims this year, as we did during 1973? Last week's NSA CC was revised lower to 1.370 million claims. This week the value dropped to 1.349 million claims. The drop in the NSA FTU claims indicates that we should expect a drop next week in the continuing claims data. We are "touching the bottom tine" of the NSA CC "pitchfork." We could, in theory, drop below 1 million by this time next year. We are 223,000 continuing claims lower this year than we were during the first week of October last year. That would place us at 1.147 million continuing claims this week next year. It all depends on how high the NSA CC value spikes during the first week of January and the mid-Summer peak. We are only 90,000 claims away from the first week of October 1973 NSA CC value from 1973. Remember that we have 89,000,000 more covered insured and only 90,000 more claims.

The seasonally adjusted Continuing Claims data could have been reported lower than it was reported. If we used the seasonal factors from 2012-2016 for the first week of October then the SA CC value could have been reported as low as 1.616 million claims. Even the authors of the report indicated that this was the lowest SA CC value since August of 1973. We are entering territory that has not been charted for nearly fifty years.

Less than 1.00% of the covered insured are receiving continuing claims benefits. The number of covered insured rose from 141,951,669 to 142,513,638 people. The combination of the increase in NSA covered insured and drop in the NSA CC number means that the Insured Unemployment Rate, IUR, of last week, which was already under 1.00% dropped further below 1.00% this week. We have never had the IUR than 1.00% until this year, until this past month.

There are at least three potential headlines for this article:

I am sure that there are more than a few people in the media who shake their heads when I publish something that seems outlandish. This is one of the reasons why I publish data and graphics with my articles. The trends are there. The trend lines for the NSA FTU and NSA CC graphs have stayed stationary since I first applied them to the graphs. If the Channel Theory applies to the NSA CC and NSA FTU data then we should see a bounce higher for both of them next week. I will look at next week's potential next Wednesday afternoon. I have given up questioning when the media would start covering this data again. I think that it will take a seasonally adjusted first-time claims value under 200,000 to get the media to start covering this data. It might take week after week increases in the SA FTU, even if they are under 300,000 claims, to catch someone's attention. 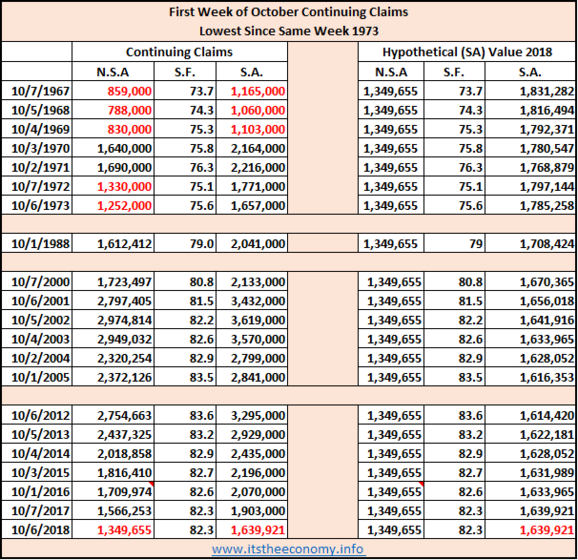