Two of the top ten most read articles on this website, this year, have had to do with the weekly unemployment claims data. The article "Unemployment Claims: Apples and Pomegranates" detailed how while both are red fruits with seeds, only one of them was able to be eaten robed in caramel. The other top ten article was "Strong Sept. Weekly Unemployment Claims" painted a similar picture. It is difficult to find same week data as low as we have recorded this year. The headline number is the Seasonally Adjusted (SA) First-time Unemployment (FTU) Claims data that is reported. The reality is the non-seasonally adjusted (NSA) FTU level that is recorded. Reality is the seriously low, remarkably low, astoundingly low NSA continuing claims (CC) data. The media rarely reports the SA CC value.  The truth is that these data points are extremely strong. the FACT (False Assertion Considered to be True) is that this is boring. What happened this past week?

Lowest Fourth Week of December First-time Claims Number this Century. The first-time unemployment claims were recorded at 321,945 and reported at 245,000. Do not be alarmed by the NSA FTU number over 300,000. This is normal. The seasonal factors are used to manipulate the SA FTU number to being under 300,000. Last December the fourth week value was 342,579. The year before the value was recorded at 346,542. The year before that it was recorded at 389,757. All of those values were converted to SA FTU values under 300,000

How low can the NSA CC Value go? The accompanying graph shows that we have been below under 2 million NSA CC frequently since 2015. The lowest we had been since November of 2000 was during October of 2006 when we had 2.030 million claims. This situation has been summarily ignored in the mainstream media. In theory, we should see the lowest December unemployment rate this century when the Jobs Report is released next month. This collection period is closest to the 12th of the month collection date for the employment situation report, or jobs report.

It is possible that we are seeing such low claims number because there has been a considerable amount of hiring this year? There are multiple reasons for these historically low values. We have seen a conversion of part-time jobs to full-time jobs and a drop in unemployed workers. We have also seen a drop in the number of people working multiple jobs. People with multiple jobs do not receive "lesser employed" benefits. They may be receiving higher pay working one job than they did working two jobs. Continuing claims are down to historically low levels because first-time claims are at a historically low level any given week of the year. We has a slight spike this Fall during the aftermath of Hurricanes Harvey and Irma. We have seen declining same week data since March of 2009. The first week of January data has been dropping year to year since 2010. Right now it appears that we will see another January to January decline in both first-time claims and continuing claims within the next two and three weeks, respectively. We have a "fifth week of data" for each measure this month.

What will it take for the media to take the data seriously? Will the authors of the report have to report a SA FTU value under 200,000? Will they allow that to happen this Spring or Summer? Will they ever report the CC value? It would make it easier for most people to  understand the historically low NSA U-3 unemployment value and historically low unemployment rate if the media did report the continuing claims data. Unemployment claims matter. Participation matters. 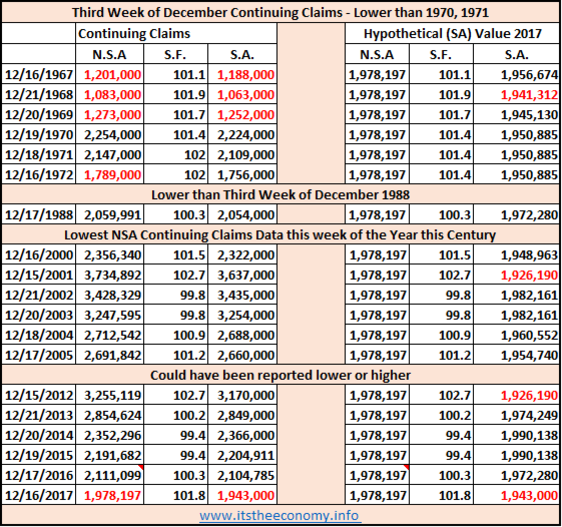 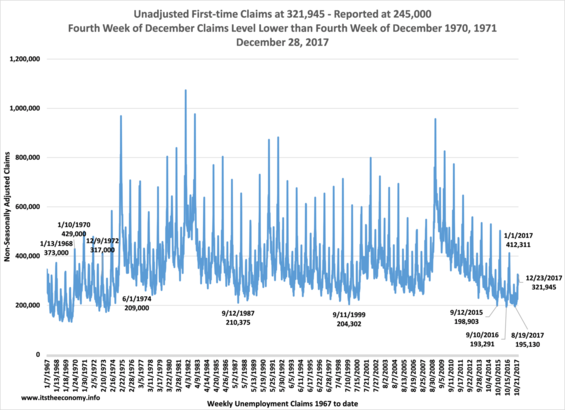 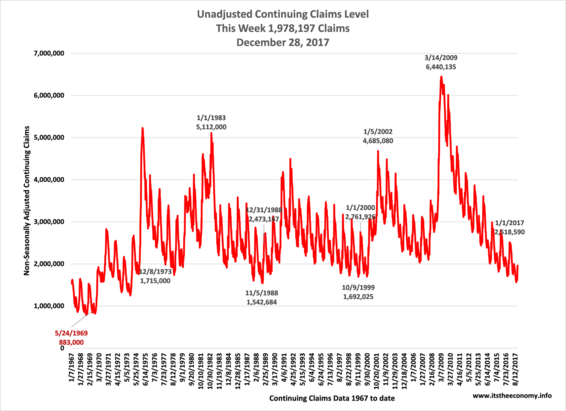 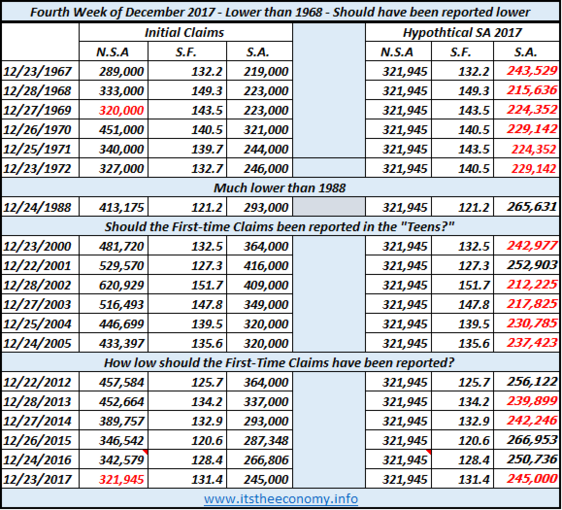