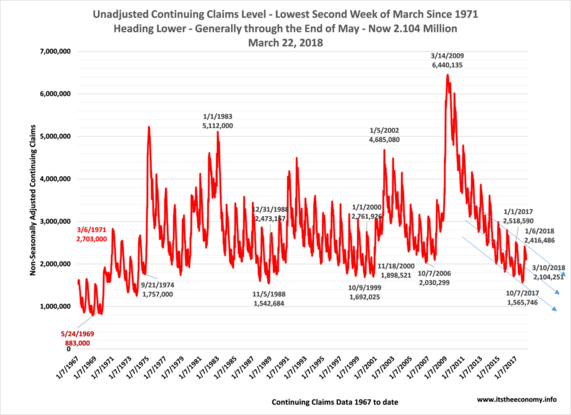 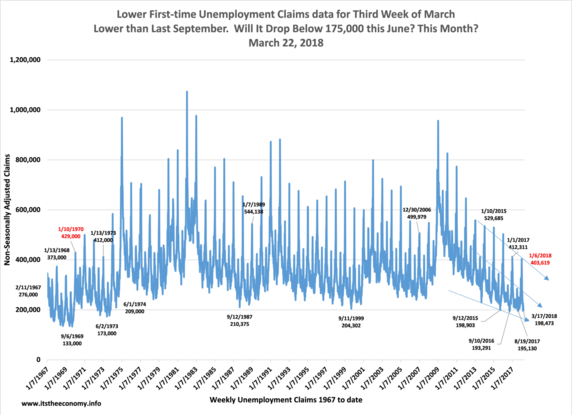 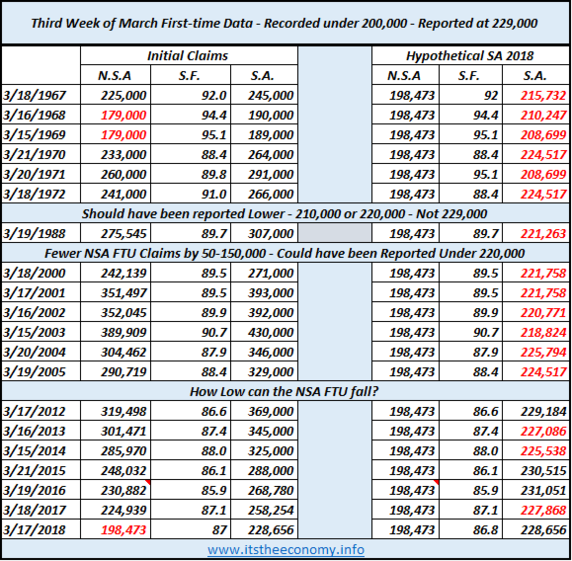 The weekly unemployment claims report used to be bottom of the hour headline news on its release date for the first seven years of President Obama's Administration, both as they soared higher and dropped lower week to week, month to month, and year to year. The non-seasonally adjusted (NSA) first-time unemployment (FTU) claims has been at or near 51 year lows this year. The seasonally adjusted (SA) FTU claims data has be reported, when it has been reported as low. What has been forgotten is that when the original seasonally adjusted records were set there were different seasonal factors used to convert the NSA FTU data to the SA data and tens of millions fewer covered insured during the 1980s, 1990s, and 2000s, and nearly 100 million fewer covered insured during the 1960s and 1970s. The NSA Continuing Claims (CC) data has been extremely low for the current week of the year data and are expected to drop further as the first-time claims drop from the levels seen during 2017.

Managing Expectations. This column use to publish detailed unemployment claims forecasts. The data was massaged so many times that it was not practical to continue the practice, especially in light of the changes to the published seasonal factors that are used to convert the recorded NSA data to the reported SA data. Tuesday,  a forecast of a drop of 5% to 7% for the NSA FTU claims level was posted on Twitter. A forecast of a drop of 2-4% for the NSA CC value was posted on Twitter. A drop in the NSA FTU value could cause an increase in SA FTU to be reported, down slightly or unchanged from the 223,000 value reported last week. A drop in the NSA CC level could generate a SA CC of as much as 1.92 Million SA CC being reported. Down could be reported as up.

First-time Unemployment Claims Recorded a Drop of 3% to Under 200,000 Claims. Again. This is being ignored elsewhere. This is comparable to the level recorded during March of 1968 and March of 1969 when there were fewer than 53 million covered insured workers. This year we have over 140 million covered insured.  The value reported was 229,000. If we used the seasonal factors from prior years, for the same week of the year, then the reported value should have been under 225,000 claims and possibly under 210,000 claims. Last week's claim level was revised slightly higher from 204,591 to 204,862 claims. This is a minor change. The question is how much can the NSA FTU claims data fall week to week when the levels are so low?

Continuing Claims Recorded and reported a drop in claims of 4%, as anticipated. The trend lines are down. We are heading down to the "middle pitchfork" line, as we are with the NSA FTU claims data. Could we drop another 100,000 claims next week and approach the NSA CC value of 2 million claims this early during the year?  Could we drop to 1.45 million by October? Next week's data will provide some insight as to what to expect from next month's Employment Situation report data for the U-3 unemployment rate. It only gives a hint because the data from the unemployment claims data base tells us of people who are collecting benefits. Not all unemployed workers receive benefits. Yesterday the Federal Reserve Chairman started a conversation that the unemployment Rate could fall under 4% this year and drop even further next Year - possibly 3.8% and 3.6% respectively.

It's the Revisions! This column has written article recently regarding the data revisions to the Current Employment Statistics data as well as the ADP Payroll data revisions. This column published an article last March about how the revisions to the NSA and SA Weekly claims data ended the Under 300,000 Seasonally Adjusted First-time Unemployment Claims streak. "What First-time Unemployment Claims Streak" detailed how the revisions created SA FTU values over 300,000. Readers of this column know that the "Streak" is an "Economic Urban Legend" that was created by fudging the seasonal factors. It was reported in this week's weekly report that next week the unemployment claims data from 2013 through 2017 will be revised.  Will they fix the streak data? Will they make this year's historically low NSA FTU data suddenly higher? Will anybody in the financial media, in print or on television, comment on the revisions?

This data is totally unloved. The report is no longer "Breaking News" at the bottom of the hour. If the data is reported in the newspapers it is buried in the business section, below the fold. We are experiencing levels of unemployment that are truly difficult to compare with previously reported data. The authors of the report no longer report the number of consecutive weeks below 300,000 SA FTU claims. This column has questioned whether or not the media will report the story if the official SA FTU claims level is reported under 200,000. Will it? Will they report on the revisions? This column will most likely have to write a stand alone article to handle all the revisions, as it did last year.

You can find this week's report archived here 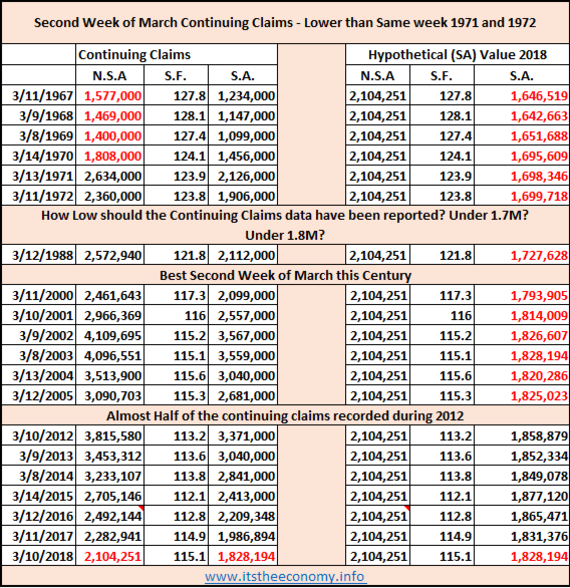