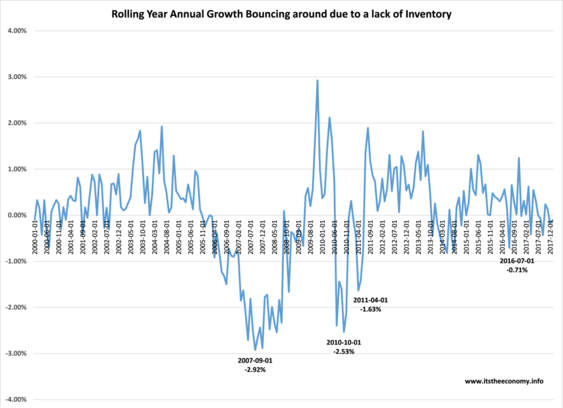 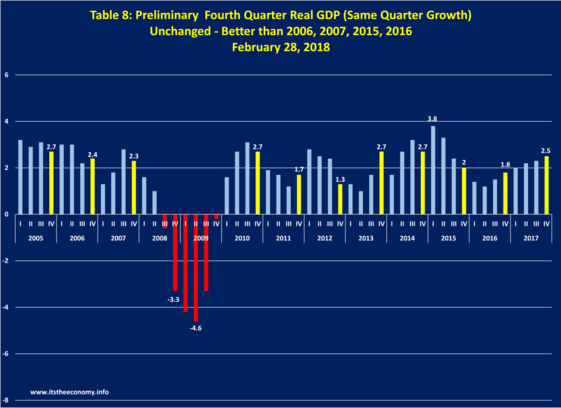 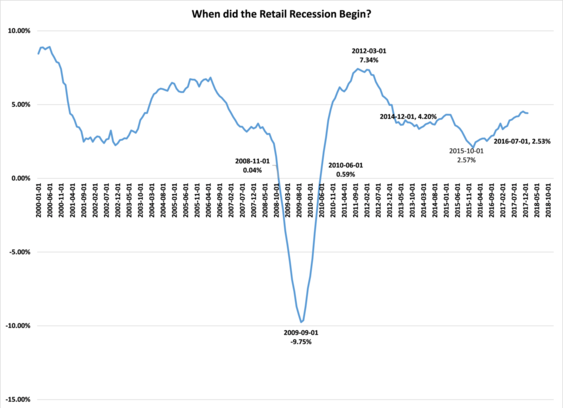 The Great Recession: Has it Really Ended?

A recession is two or more quarters of economic decline. The National Board of Economic Research (NBER) is a non-profit organization that determines when a recession begins and ends. Economic cycles are composed of four main sections: Recession, Recovery, and Expansion, Slowdown. "All" expansions end when a slowdown becomes a recession. The questions are when did the recession really begin? Are we really in an expansion mode or just a prolonged recovery?

When did the Recession really begin? The Great Recession, this column has argued, was really three recessions in one: The Housing Recession Recession, the Jobs Recession, and the Retail Recession. There was the Existing Home housing recession that began during 2006 after the peak number of units sold was recorded during 2005. Existing Home sales, by units, declined through May of 2009, recovered a little, and then bottomed during June 2010, before making its long march back to nearly the peak times of 2005. The average existing home sales price exceeds what it was at the pre-recession peak, meaning that people who lost equity during the recession have "recovered it."  The new home sales recession began January 2006 and continued through April 2011. The total sales have barely exceeded the rolling year average seen during January 1993. The Retail Recession started with a slowdown during February 2006. The negative sales growth period began November 2008 and stayed negative through June 2010. The Jobs Recession was a the deepest recession since 1980. The slowdown Started during March of  2006, as fewer jobs were being added on a regular basis. The actual jobs recession began April of 2008. The Jobs Iceberg started when we did not have as many full-time jobs during July or August of 2008 as we did during July or August of 2007. The recession started to ease after August of 2009 - real job growth did not start until August of 2010.

The Existing Home Sales Recession Started during 2005 and ran until 2009. Anybody who was in real estate or looking for homes during 2005 realized that the "Three Woman", Hurricanes Katrina, Rita, and Wilma, had a huge impact on real estate and a huge impact on gasoline prices, and that this impact rippled through the jobs and retail market. The housing recession did not show recovery until 2009, which was short-lived.  The volatility in the non-seasonally adjusted data is why they government reports seasonally adjusted data.

The New Home Sales Recession began during 2005 and ran virtually until 2011. There were the occasional spikes in activity, but nothing that ran for a whole quarter until 2011. Once again, the data here shows month to month volatility in growth rates. The rolling year data posted on twitter, and in regular article on the new and existing home markets, have shown steady improvement in sales for both segments of the housing market. An article that ran over the weekend in the Wall Street Journal had a blaring headline that we are approaching the next housing crisis. The readers of this column know that last week this column published an article showing 10 year highs for New home starts and new home completions and near record highs for units under construction. If you read the article, not just the headline, you will see that the new home crisis is an affordable new home crisis.

We are not in a Retail Ice Age. We are in a Retail Renaissance.  If you examine the Retail Growth chart you will note that while New and existing home rolling year changes did drop below zero during the recession of 2000-2001, retail sales did not experience this recession. This recession lasted from roughly November of 2011 and ended June of 2010. The retail recession was experienced last and emerged from first. Right now we are in a Retail Renaissance with annual total growth approaching levels seen during 2010 as we were emerging from the Great Recession.

We have been in a Jobs Ice Age.  This column has written numerous articles regarding the Jobs Iceberg, where the part-time jobs created during the recession were the smallest part of the iceberg, above the water, and the full-time job losses were the largest part of the iceberg, below the waterline.  The most recent Jobs Recession Started during November of 2008 and lasted until June of 2010. The Recovery, as with the other "recessions," did not really start until 2010. If you look at the Non-seasonally adjusted (NSA) CES Private Sector Worker Growth chart you would think that we are in a "worker slowdown.." Remember that he January Jobs Report came with massive revisions to the January Jobs Report came with massive revisions to the NSA CES data, as well as the seasonally adjusted (SA) data, mostly during 2015, 2016, and 2017.  We had one of our best January Jobs Reports, based on the previously reported December NSA CES worker data, that we had ever had. The same is true for the February Jobs Report. The ADP Payroll report was reflecting strengthening hiring in their SA Payroll data until they revised their data this month to, apparently, compare better with the Private Sector CES growth.  Note that while we have emerged from the overall Jobs Iceberg and have started to climb the Jobs Mountain, Men are still in Recovery Mode while women are well into Job Expansion Mode.

This week we will receive Real Estate Sales data - New and Existing.  Home Sales, and New Home Construction, are the best that they have been during the past decade. We will receive new and existing home sales data this week. We need to watch the inventory levels of both new and existing homes. Existing homes have been in "shortage mode" for over a year. New home inventory has been on the rise, as have units sold and the average sales price.

The Great Recession was a three recessions in one: A Housing Recession, a Jobs Recession, and a Retail Recession. The Housing Recession, new and existing, started the downward spiral of the Great Recession at the end of 2005, and not finally emerging for consecutive quarters until 2011.  A Jobs recession began with the slowdown starting at roughly the same time and going into recession during April 2008, emerging August of 2010. The Retail recession was deep and short-lived, starting during November 2008 and emerging June of 2010. "All" recessions are jobs recessions. The Great Recession started long before it was truly recognized by the NBER. The GDP has four main components: Gross Private Domestic Investment (which includes new construction,) Personal Consumption Expenditures, Government Consumption Expenditures, and the Import/Export trade balance. We are seeing a resurgence in employment. We are in a Retail renaissance. New home sales and inventory are on the rise - there is no crisis. We are seeing, for better or worse, an increase in government expenditures. Relax. the underlying NSA data is remarkable. The "just plain lying" SA data is a different story.

The Great Recession has ended. the Great Recovery is still underway for housing and the male full-time worker.  The Great Expansion has hit for women and for retail. 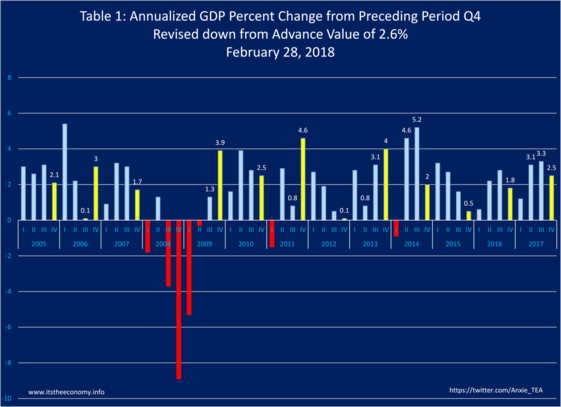 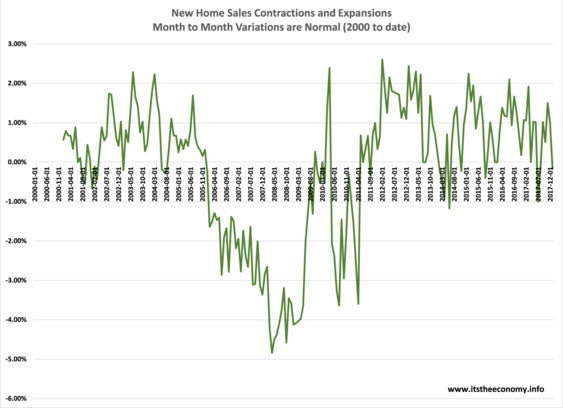 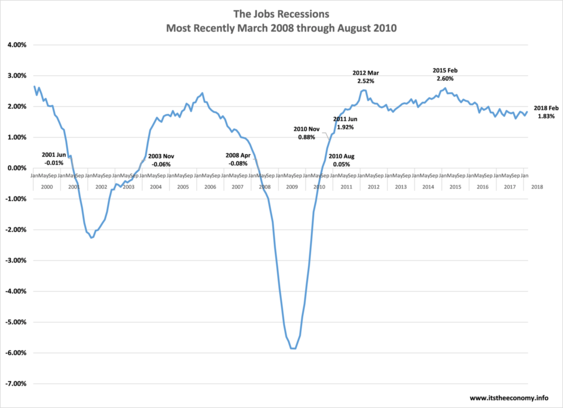