Watch the Sector data and the Seasonal Factors

This week is "Jobs Week" with the release of the ADP Payroll Report for February being released tomorrow and the February Employment Situation Report being released this Friday. The Payroll report only provides seasonally adjusted data and only covers the private sector data. The Employment Situation Report contains seasonally adjusted (SA) data and non-seasonally adjusted (NSA) data. The Employment situation report has two data sets as its basis: the Current Employment Statistics (CES data and the Current Population Survey (CPS) data. The CES data measures workers. The headline number is the seasonally adjusted non-farm payroll data. The CPS data measures the number of unemployed workers plus the number of full-time jobs, part-time jobs, and workforce population. The CPS  data is used to calculate the unemployment rate and the workforce participation rate. The ADP data most resembles the private sector CPS data, nit the "non-farm payroll" number.

This column has published two articles in preparation for the two reports. The article "February Jobs Forecast: More Strength" details how there should be a surge of both jobs and workers, non-seasonally adjusted. It also details how the overall seasonal factor for Private sector growth has been sliding since 2009, thereby reducing the level of February Private Sector workers added to the economy.  Unemployment, NSA and SA, should fall. The unemployment rate should fall. The participation rate should climb. It was projected that we should see over 260,000 SA private sector workers added in Friday's report, depending upon the seasonal factors used. The article "February ADP Should Be Fabulous" details how the seasonally adjusted data should show improvement in all sectors except possibly Trade, Transportation and Utility. There is also some indication that the year over year growth may be absent in Natural Resources (Mining and Logging.) That article projected over 250,000 private sector jobs should be reported as being added during the month of February. Both articles even commented that the number could be over 300,000 workers and over 300,000 jobs. Where could we see growth in the CES worker data?

Expect to see month to month decline in Non-Seasonally adjusted workers in one sector.  The "Trade, Transportation, and Utility (TTU) super sector "always" sheds jobs during February. Do not be surprised if there are minor reductions in the NSA CES data for Construction, Mining/Logging, and Manufacturing.

Expect similar trends in the seasonally adjusted data. The TTU data could be flat or show a slight decline in SA CES workers. Watch the Professional and Business Sector (PBS) and Financial Services sector data. February growth in these two sectors have been slowing compared to prior years. They should see growth, just slow growth.

This has been an incomplete recovery. As of February 2017, three sectors had not recovered to February 2007 levels of workers. Three sectors have not recovered to February 2009 levels as of last year. We have seen dramatic improvements since that time. Last Month three sectors were not back to January 2007 levels, Construction, Manufacturing, and IT. Three sectors were not back to January 2009 levels, Mining/Logging, IT, and Government. These are the sectors to watch on Friday. We are in a Manufacturing Renaissance. Manufacturing jobs have been growing during the past year. Watch the growth rates for these sectors and the seasonal factors. This could be a remarkable "jobs report," especially if they use the seasonal factors from February 2012, 2013, 2014, or 2015. Will the data be intentionally skewed low? Time will tell. 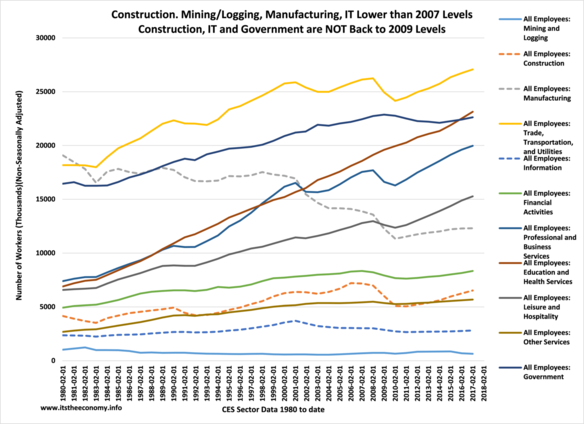