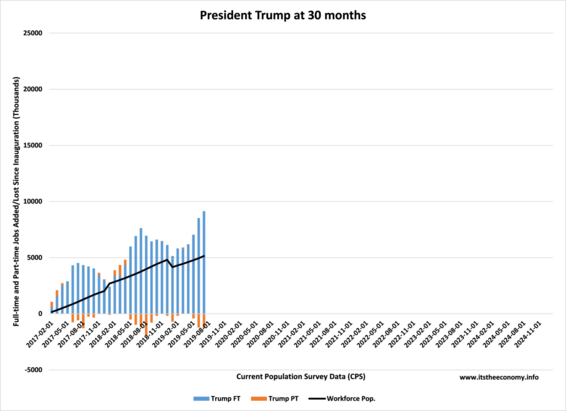 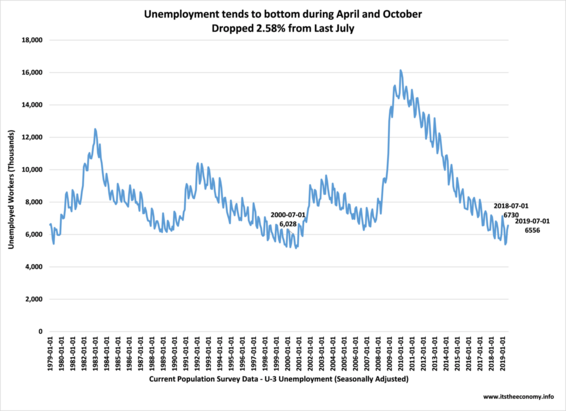 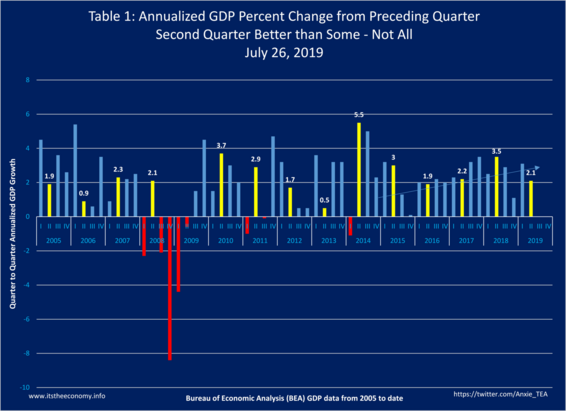 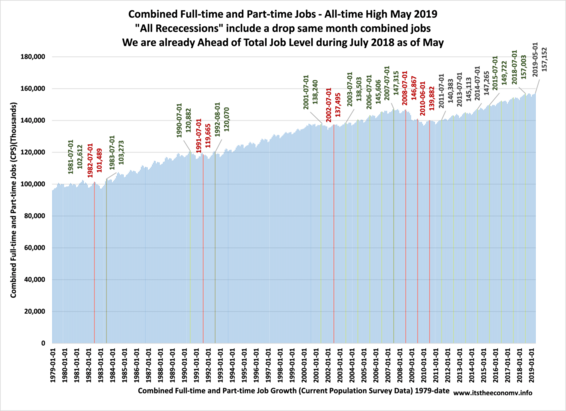 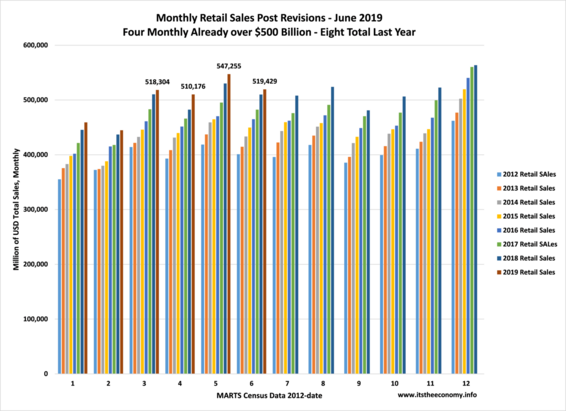 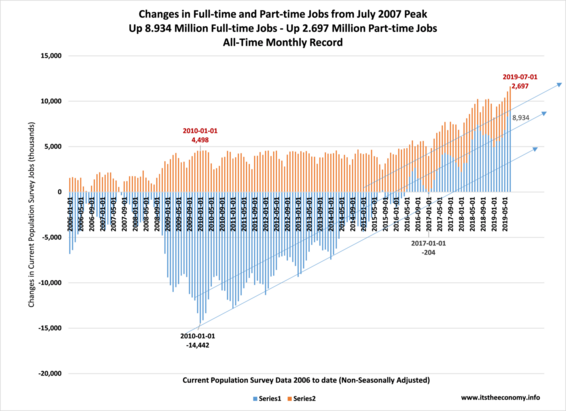 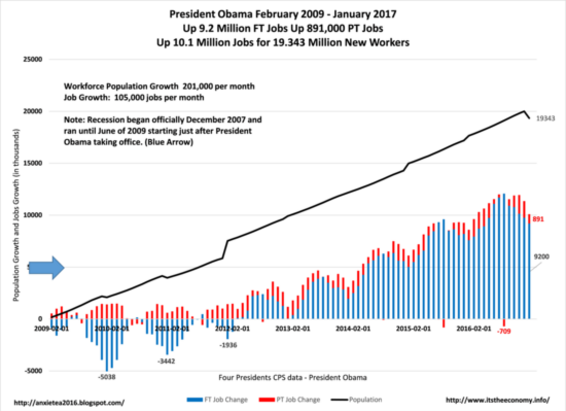 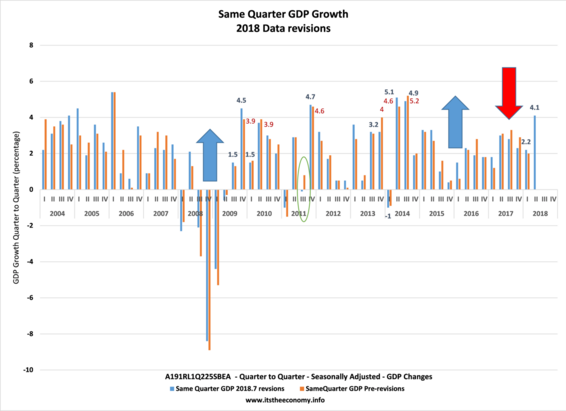 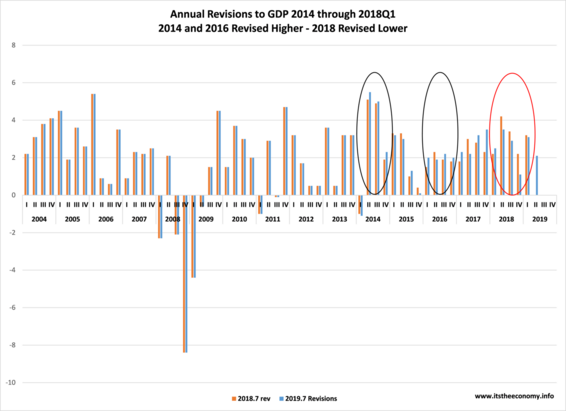 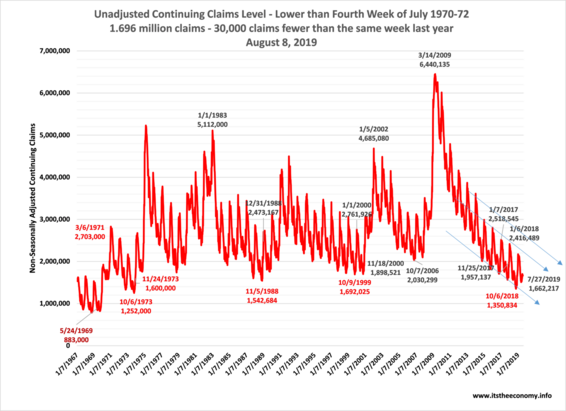 Will this be the first media created recession?

"Everyone" Is looking for storm clouds on a clear blue day

It is generally understood that a recession is back to back quarters of annualized, quarter to quarter, Gross Domestic Product (GDP) declines in growth, that is negative growth. We had four consecutive quarters of annualized negative growth during 2008-2009. We had two out of three consecutive quarter negative during 2011. There are four components to GDP: Personal Consumption Expenditures (PCE,) Gross Private Domestic Investments (GPDI,) Government Consumption Expenditures (GCE,) and Net Exports. Another measure of GDP is same quarter growth. What "creates a recession?"

The Gross Domestic Product has been improving in spite of Backward Upward Revisions to the Obama Administration data. The media was projecting a 0.5% annualized growth rate for 2019Q1 due to the Government Shutdown, and due to the normal situation that the first quarter is the weakest quarter of the year. Growth was reported over 3.0%.Growth during 2018, and the first quarter of 2019, were reduced while growth during 2014 and 2016 were revised higher when the 2019Q2 advance GDP report was released at the end of July. "Second Quarter GDP Data: Revisions: Some Surprises" goes into the details. Similar wholesale revisions were made to the GDP data with the release of the 2018Q2 advance GDP report. Last year the data was revised back to 1929. The revisions meant that instead of having three quarters of annualized growth over 3.0% during 2017, we only had one quarter of 3.0% annualized growth during 2017. "Giddy GDP" looks at those changes.

The Same Quarter GDP was revised as well. There are three GDP values, and only the Annualized GDP gets the headlines. Ocassionally you will hear about the End of Year Annual Growth Rate. You rarely hear about the same quarter GDP growth rate. The annualized growth rate is the growth we could expect if we grew at the current quarter's growth rate for four consecutive quarters. That "never" happens. The annual growth rate is the amount of GDP during one year compared to the prior year. The same quarter growth rate tells us  what our end of the year growth rate could be.We had a streak of eleven consecutive quarters of equal or growing same quarter GDP growth going into the revisions. That growing growth streak was edited down for 2018Q3 through 2019Q1.  Eight quarters of momentum instead of eleven.

We have a record level of workers and Jobs. The Current Employment Statistics (CES) Worker and Wage data and the Current Population Survey (CPS) Jobs and Unemployment data have been out of sync. Non-seasonally adjusted (NSA) CPS Jobs data tends to peak during July. Last year the Christmas hiring data surpassed the July hiring data.  The NSA CES worker data tends to peak during November or December due to Christmas hiring.

Jobs Iceberg now a Jobs Mountain. You will notice in the Jobs Mountain/Jobs Iceberg histogram that we lost over 10 million full-time jobs between July 2007 and January 2010. It was not until the Summer of 2015 that all of the lost full-time jobs were recovered. Those jobs were lost after the Summer of 2015. The mountain grew and retreated during 2016 and 2017. We have more full-time jobs, more total jobs, and fewer part-time jobs this July than we had during July 2018. If we see a change in the mix of full-time and part-time jobs, outside of seasonal norms, then this will be the first indicator of a potential slowdown and then a potential recession.

Unemployment Claims versus Unemployment level versus unemployment rate: Continuing claims continue to slide lower from last year's level. This week the unemployment claims data for the final week of July were published. The NSA Continuing Claims (CC) data was the lowest that it had been since the fourth week of July 1973. It was also lower than the fourth week of July during 1970, 1971, and 1972. We have nearly 100 million more covered insured workers than we had during 1970, 1971, and 1972 and fewer continuing claims. Year over year we have 2 million more covered insured at 30,000 fewer NSA CC. First-time claims trend lower from now through the end of September. More detail can be found in this week's article "Weekly Unemployment Claims Record for First Week of August." Not all workers qualify for unemployment claims benefits.

Unemployment Claims versus Unemployment level versus unemployment rate: The Unemployment Level (CPS) continues to slide lower from last year's level. We had 1.558 million NSA CC during the middle of July, the time when the CPS and CES data was collected. We had 6.556 million unemployed workers during July. This was 200,000 claims lower than July 2018, and similar to what was recorded during July 1998 when we had 139 million participants (FT Jobs, PT Jobs, plus unemployed workers) compared to this year's .165 million participants. See this tweet on U-7 Unemployment.

Having a second job is the ultimate form of unemployment insurance. This July we had a "Record July for Men, Women, and Multiple Job Workers." This was not always the case. It took men until February of 2018 for men to recover and maintain all of the lost full-time jobs that they lost between July 2007 and January 2010. Women recovered by the Summer of 2015. Women work more dual PT jobs than men and men work more dual FT jobs than women.

We are in a Retail Sales Renaissance. There is a repeated meme that we are in a Retail Ice Age. Some retail stores are trimming locations or going out of business entirely. There are, and have been, "Ghost Malls." That much is true. what is also true is the we had a record retail sales year last year, our first year over $6 trillion in non-seasonally adjusted MARTS (Monthly and Annual Retail Trade Survey) sales was recorded  during 2018.

While the rolling year, or trailing year, growth rate was over 5% last year and is lower this year, the rate of annual growth is improving. We have had four consecutive months of $500 billion in total retail sales this year. We had two $500 billion months between January and June last year.

Revisions are changing the picture. This column spends a considerable amount of time addressing the revisions to the data. The April 2016 non-farm payroll data was revised down 37,000 so that the May 2016 data could be reported up 38,000. It could have been reported at 1,000 jobs without the revisions. The following month, with the release of the June Jobs Report, the May Private Sector Worker number, the foundation of former President Obama's Job Streak, went negative. There were 7,000 net job losses during May 2016. This is addressed in the two part article "June Job Report Reveals that the Private Sector Jobs Streak Ended Last Month." Revisions are a part of "the game." When the revisions change the end of the year data for multiple years, when the revisions change the narrative from a strong jobs market, or a strong GDP growth, to a weaker jobs market or slowing growth, it becomes a very big deal.

Inflation or deflation - Harbinger of Doom?  Some people are starting to talk about the possibility of deflation. We had ten month of deflation during 2015 that went unreported. If it was reported it was called a gasoline stimulus. We have been consistently reporting Shelter Inflation, Medical Inflation, and Service Inflation coupled with Commodity Deflation in the Consumer Price Index Reports. The most recent CPI report for June reported the same situation.

The Dreaded Bond Inversion. You may be hearing that an inverted yield curve is a canary in the coal mine for a future recession. There are negative yields in Europe. A German 30 year note had a return of -0.095% this week. Fourteen countries are negative on their 10 year yields.  I remember hearing about this during the 1990s. The 2001 recession was mild. I do not remember hearing about this during 2006, 2007, or 2008. Yields are inverted because our 10 year bond are positive and Europe is negative. As demand increases prices on bonds increase and yields drop. We have "never been below 2.00%" The trend since 1980 has been a declining trend. While some are saying that a negative 30 year bond is inevitable, it may be 15-20 years out.

"New Home starts are indicative of a weakness in the economy." There are some in the media who are hanging their homes on a slowing new home start cycle. Last year the new home starts were outpacing new home completions. Under construction inventory was surging. It appears that the starts from last year are now becoming completions, which in turn will become sales.

Back to GDP - and the "drop" in Gross Private Domestic Investments. The Advance Second Quarter GDP included annualized data on Gross Private Domestic Investments and same quarter growth in GPDI. The Table 1 GPDI was -5.5% after a quarter of 6.2% growth. The Table 6 data, same quarter to same quarter, was up 4.1% after being up 4.1% during 2018Q2. (2019Q2 advance GDP report is here.) So were we up or down during the second quarter. Yes and Yes.

Looking for storm clouds on a blue sky day. Some day the first time unemployment claims will start to rise. It is called October. Unemployment will spike again, and employment will drop up to 2.00% this January. It is the annual Scrooge effect.  There is normally a mix of sunshine and rainbows in the reports that have some storm clouds. This economy could be undone by people who do not want to see this President succeed. This President has created more full-time jobs than former Presidents Reagan, Clinton, George W Bush, and Obama after 30 months in office. This article noted that some commentators are attempting to compare former President Obama's final 30 months with President Trump's first 30 months. President Obama oversaw the loss of five million jobs before he created 14.2 million full-time jobs for a net 9.2 million full-time jobs. President Trump has already added 9.138 million full-time jobs.

There is so much data thrown at people every day of every month of the year that some people will grab on to what ever data fits his or her narrative. The yield curve is inverted (while the rest of the world has negative rates.) The unemployment rate rose during July (and was still lower than last year and almost any other year during the month of July.) GDP was "only" 2.1% (which was better than second quarter 2016 and second quarter 2017.) Annualized GDPI was negative this quarter (while forgetting that same quarter GPDI was negative for three consecutive quarters during 2016.)

There is so much data thrown at people every day of every month of the year that some people will grab on to what ever data fits his or her narrative. The yield curve is inverted (while the rest of the world has negative rates.) Unemployment rate during July (and was still lower than last year and almost any other year during the month of July.) GDP was "only" 2.1% (which was better than second quarter 2016 and second quarter 2017.) Annualized GPDI was negative this quarter (while forgetting that same quarter GPDI was negative for three consecutive quarters during 2016.)

Jobs are at a record high. Unemployment is a record low. Retail sales are on a record pace. This is the opposite of a recession. This is an expansion. This may be the first recession created by the media. We can avoid the "inevitable" recession if the media starts paying attention to the data,and the revisions to the data, instead of reading the conclusions of the reports. What creates a recession? Fewer people working. Fewer people spending money. The media should never create a recession.