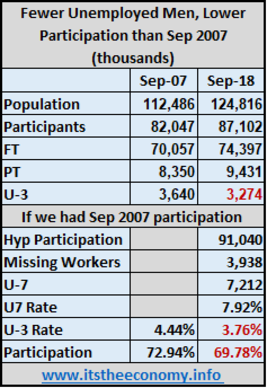 The September Jobs Report, or employment situation report, was released amidst the drama of the Brett Kavanaugh confirmation process. Men and women were watching to see if the new normal was going to be guilt by accusation. Was it going to be guilty until proven innocent? Was this just a "job interview," or a "trial by press/mob rule" situation? The jobs report was actually quite good. The seasonally adjusted (SA) Current Employment Statistics (CES) private sector number was a gain of 121,000. This normally would not be a great number. The August data was revised up by 69,000 workers which meant that 190,000 SA private sector workers were added to the economy. This and other information was covered in the article "September Jobs Soar." Wages rocked higher in all categories, according the the CES data, non-seasonally adjusted. The article "Five Presidents at 20 months" reported that there have been over 6 million full-time jobs added to the economy since President Trump took office, according to the non-seasonally adjusted (NSA) Current Population Survey (CPS) Data. The data being addressed in this article has to do with the "War on (Wo)Men" data. How are men and women performing in the New Economy?

Women added over 900,000 jobs this month. How is that possible if we only added 121,000 seasonally adjusted private sector workers to the economy? This is the difference between the CES worker data and the CPS jobs data. This is the difference between the SA and NSA Data. There are more women working now than at any other time. Women are working 56.0 million full-time jobs and 17.3 million part-time jobs. There are also 2.8 million unemployed women. Women have added over 4.5 million full-time jobs since February of 2015. This is when they exited from their full-time jobs recession.

Men Shed Full-time Jobs and added part-time jobs this September. Men had a decline of 641,000 FT jobs, month to month, and an addition of 392,000 part-time jobs. It had taken longer for men to recover from their jobs recession. Women fully recovered at the beginning of 2015. Men recovered all of their lost full-time jobs, over 10 million of them, during the Summer of 2016, lost them again, recovered them and added to them during the Summer of 2017, and lost them again, before recovering and adding more Full-time jobs to their totals than they did during 2016 or 2017. This is a pattern that we saw during 2005, 2006, and 2007. Men are up 4.3 million full-time jobs and 1.1 million PT jobs compared to September 2007.

There is seasonality to all of the data. This is the reason why the Government publishes seasonally adjusted data as the headline news. The problem is that as people are leaving the workforce, going back to school, managing households, or being displaced, the public is left scratching their heads. "How is the economy growing and I can't find work?" We know that all sectors added workers September to September except Information Technology, non-seasonally adjusted. Month to month only Education and Health Services and the Government Sector added workers. There are many more ways to examine the data. This column will produce further analysis on the dual job worker data and on the "Red, Gray, and Blue" aging workforce. 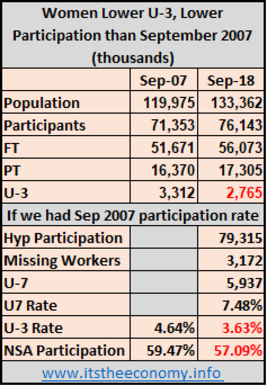 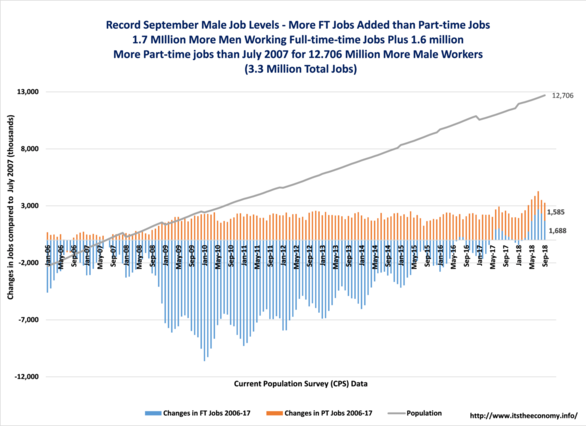 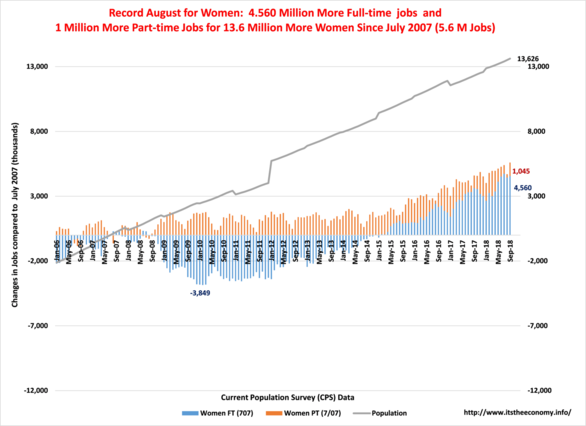 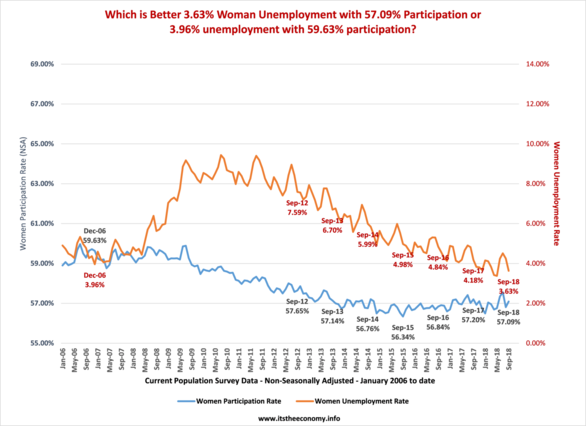 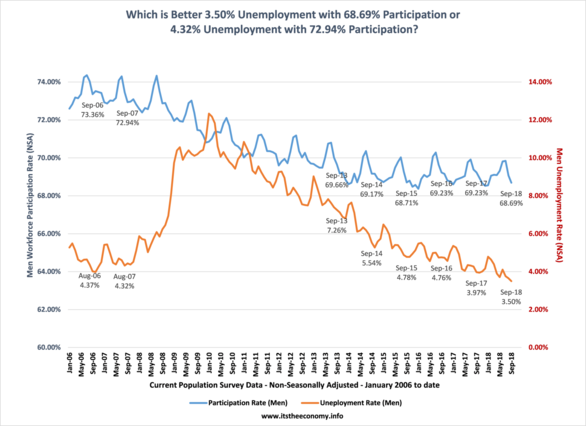