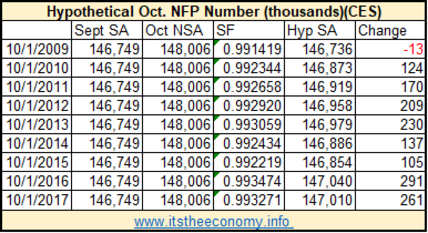 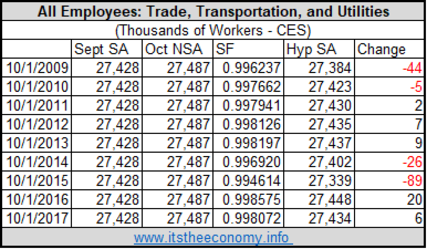 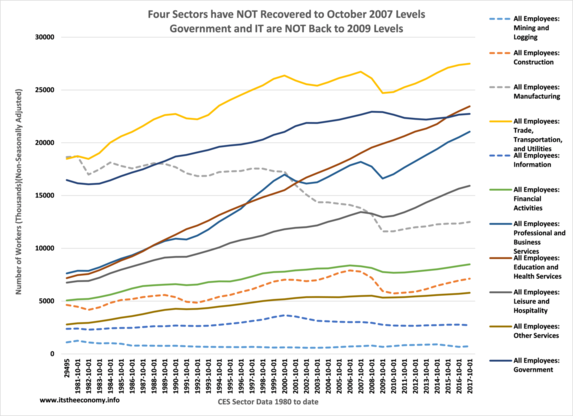 Last Friday we received a strong October Jobs Report - the Second strongest September to October private Sector worker growth since 1980. Unemployment fell, as expected, part-time jobs edged higher and full-time jobs dropped, as expected. If you heard that this past Friday you probably did not hear any more after Saturday. This column spends days digging into the details and writes more than one article on the Jobs Report data. In addition to the top line Current Population Survey (CPS) data on jobs and unemployment and the Current Employment Statistics (CES) data on workers this column has published:

This disparity in job creation for men can be seen, and has been seen, in the CES sector data. The CES data, seasonally adjusted or non-seasonally adjusted, has indicated that some sectors have not returned to 2007 levels. Four to be exact. One sector has not returned to its October 2009 level of workers. Also, the Non-farm payroll number could have been reported higher.

Did we Gain or Lose workers in Three sectors last month? The main disparity between the 2009 and 2017 values can be found in three sectors: Construction, Manufacturing, and the Trade, Transportation, and Utility (TTU) Sectors. The TTU sector, as well as the Professional Business Services Sector and the Health and Education Sector have seen the largest growth. Manufacturing and Construction have been down.  We saw seasonally adjusted gains reported in Manufacturing, Construction, and the TTU sectors that could have been reported lower or negative.

Two Sectors Recorded month to month drops in Workers. There was a slight down-tick in Mining and Logging. there was a considerable drop in the Leisure and Hospitality Sector. That said, mining and logging have seen the number of workers soar by over 8% since last October.  Year to year every sector except IT is up in the number of workers. The largest number increase is in Professional and Business Services followed by health and Education Services. A similar pattern is seen in the SA CES data. The main difference is the Leisure and Hospitality Sector. Note that all of this data is available on the Bureau of Labor Website. This data is also available from the Federal Reserve Economic Division.