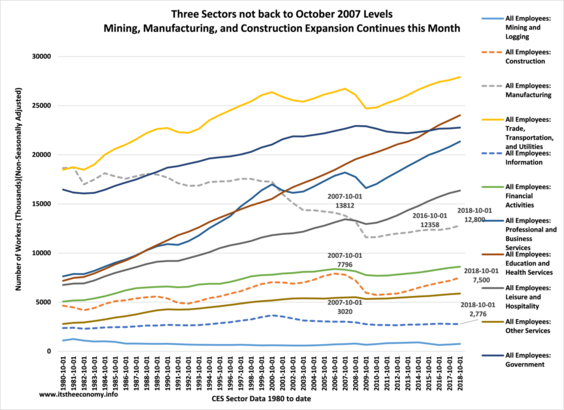 The October Employment Situation Report, or Jobs Report, provided some good news for the average person. The article "October Spooktacular Jobs Report" detailed how the month to month and October to October non-seasonally adjusted (NSA) current Employment Statistics (CES) Private Sector Worker data grew at a pace not seen for a very long time. We saw 246,000 SA CES private sector workers added the economy after an upward revision to the August and September SA CES data of 13,000 workers. This means that we added a total of 259,000 workers from the previous report. we also saw a nice bump in the non-seasonally adjusted Current Population Survey (CPS) jobs data with increases in both NSA full-time and part-time jobs. We did see a slight uptick in NSA U-3 unemployed workers as more people look for work and are having difficulty re-entering the workforce. Workforce participation is up from last October and the unemployment rate is down from last October. How are the individual sectors performing?

All Sectors, except Leisure and Hospitality, added non-seasonally adjusted workers last month. The largest percentage growth was found in the Government sector, Education/Health Services (EHS,) Information Technology (IT,) Trade, Transportation, and Utilities (TTU,) and Mining and Logging (M/L.) The largest real job gains were in the Government Sector, EHS, TTU, and Professional Business Services (PBS.) All sectors grew October to October except IT, which trimmed 8,000 workers.

All Sectors saw their average weekly wage grow last month. The largest growth in wages were recorded in Construction, EHS, LAH, and Other services. This is the monthly, non-seasonally adjusted, growth. This data is different from the quarterly seasonally adjusted wage growth of over 3% report in the mainstream media.

All Sectors saw seasonally adjusted worker growth September to October. Only Information technology saw a drop in seasonally adjusted workers from last October. We have seen an increase of 2.550 million NSA CES  non-farm payroll jobs and an increase of 2.466 million private sector workers during the past 12 months.  We are tracking better than we were during 2016 and 2017. We would have 450,000 more workers added to this year's data if the 2016 and 2017 data wasn't revised higher between the December and January Jobs Report. This was an awesome report. 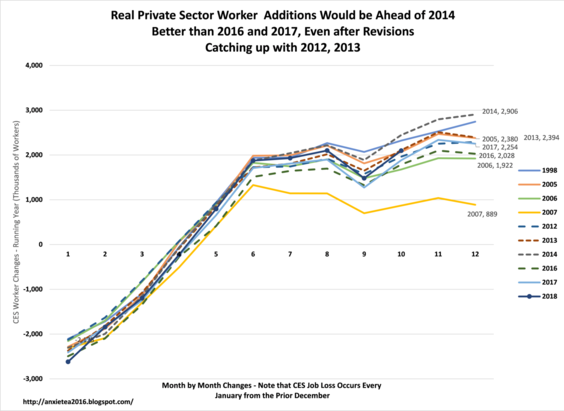