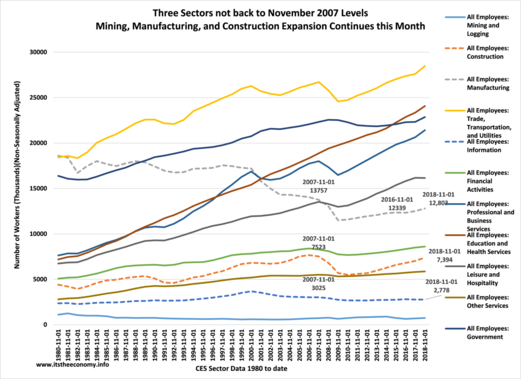 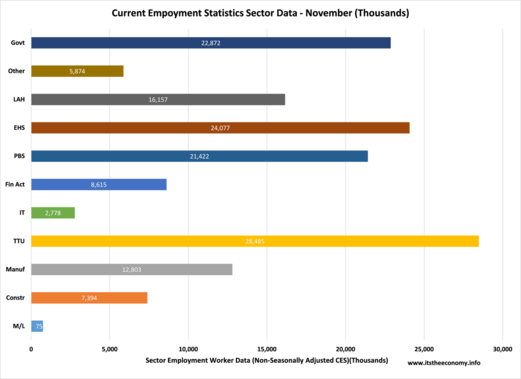 We are climbing a Jobs Mountain right now. Same month data is up over last year. The thing is that the recovery and expansion have been uneven. There are ten private sector groups, super sectors  or just "sectors," plus the Government Sector. Three of those sectors are not back to pre-recession levels of workers. This article will examine that data, and the wage data.use workers and more drive

The largest gain in workers was recorded in the Trade, Transportation, and Utilities (TTU) sector. This makes sense, as we need more warehouse workers, and more drivers, for "Santa's Sled." The Jobs Report Forecast article projected declines in Leisure and Hospitality (LAH,) Other Services, and possibly Construction. We recorded minor declines in Mining and Logging (M/l) and Financial Activities. The trend graph shows that since 1980 we have seen a general downward trend for Manufacturing. That trend has reversed after the recession ended. Also note the improvement in Construction. The other trend is that Trade, Transportation and Utilities (TTU,) LAH, and Professional Business Services (PBS) have been on a steady upward trend, along with Education and Health Services (EHS.)

Seasonally Adjusted, all sectors added workers except Information Technology (IT,) Mining/Logging, and Government. The drop in IT workers month to month and year to year, were expected for IT. The drop in M/L and Government were not reflected in the ADP data, in part because they have different seasonal factors, and in part because the ADP data does not measure Government payroll data. All seasonally adjusted. sectors except IT grew November to November.

All Sectors saw their highest weekly wages for the month of November. The sectors that saw the largest gains were in IT,  Financial Activities, LAH, PBS, and M/L. These sectors all saw wage increases greater than the average wage gain of  2.85%, non=seasonally adjusted. The increase in wages, multiplied by the growth in workers, should mean an increase in disposable income and a stimulus to the economy and the GDP number.

One thing to note is that the Hiring data in the monthly JOLTS (Job Openings and Labor Turnover Survey) has nothing to do with the Jobs Data. The JOLTS data for October will be release December 10th. This worker and wage data is for the November Jobs report. Just because there are Job Openings greater than the number of unemployed workers doesn't mean that we have an oversupply of jobs. Job Openings is the economic cousin to the CPS unemployed workers data. Unemployed workers data is the economic brother to the weekly continuing claims data. If you look at the second graph, the bar chart, you will see a similar patterns to the "Hires Data," the "Job Openings " data and the "Quits" data. You will also note that three of the four sectors with the highest quits, hires, and job openings data have the lowest weekly wages. Would those rate fall if those wages grew? Would training costs drop if retain rates rose?

There were some minor surprises in the NSA sector data. The SA data came in as expected. Wages are rising. Workers are increasing in number. This was a solid report. Next up will be the "Five Presidents at 22 months" article followed by the "War on (Wo)Men" article. Both will examine the Full-time job data, the part-time jobs data, the unemployed worker data, and the population data. It is important to remember that TTU, and EHS are two of the largest super sectors and they saw wage increases under 3.00%. This is weighing down the non-seasonally adjusted wage growth this month. The other side of the coin is that IT saw the largest spike in annual wage growth and is one of the smallest sectors, meaning that this increase is the equivalent of an ant pushing an elephant uphill.