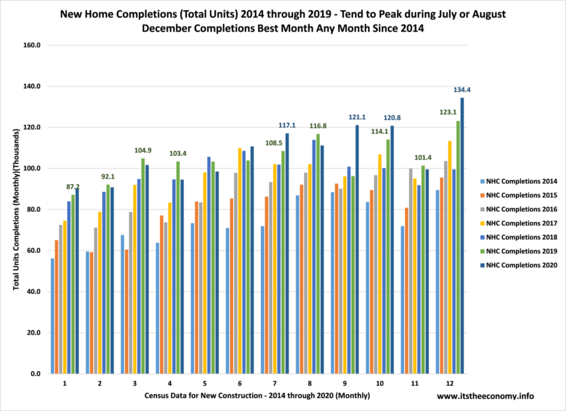 The New Home Construction Recession is Over

There are a number of items covered in the new construction data, including new home Starts, Units under Construction, and Completions. One flows into the next. Completions also tend to lead to new home sales.

We recorded the most December Completions since December 2005. The non-seasonally adjusted data points to completion improving since the prior recession. There was a slight drop during the month of December from December 2017 to December 2018. The housing crisis started during 2005 when we had peak sales and picked up steam during 2006 after we hit peak sales price. Recently we have experienced an existing home housing shortage that has spurred new construction to fill the gap. You have to look back to December 2006 to find any month with a higher level of completions.

We are seeing good annual growth and strong same month growth for Completions. The article that covered the monthly retail sales data had a graph that showed the Rolling year growth, the current year growth, and the same month growth. We had an extended period of contraction followed by strong growth through the end of 2012 and the beginning of 2013. The growth rate for completions declined for eight years. The Wuhan Crisis caused that growth rate to contract briefly, current year data, between March and August of this year. The 12-month average, or rolling year data, did not contract. There were 9.18% more completions this December compared to December 2019.

Next week we will receive the New Home Sales Data. New Home Sales took a major hit during March and April of this year. New home sales, depending on th month, have been up 10% to 50% this year, depending upon the month. New home sales spiked from 55,000 units during July 2019 to 85,000 units during July 2020. Inventory has been falling since March 2020 when we peaked at 329,000 units. Last month we were reported at 287,000 units. Sales peaked this July. We will see what kind of activity finished the year.

This was a strong report. 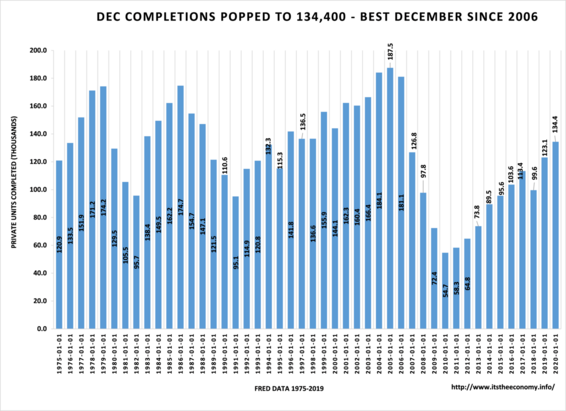 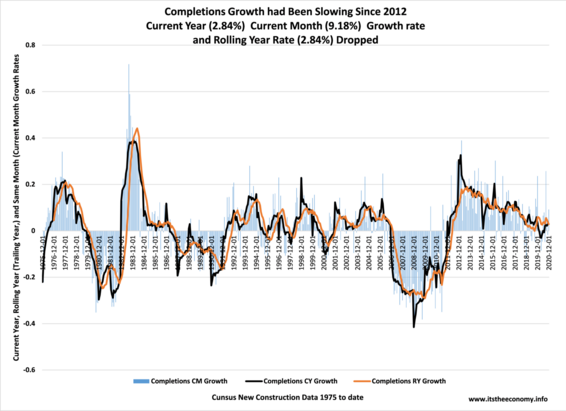