Last week the Advance December MARTS sales report was released. The headlines were that retail sales dropped last December. This was the seasonally adjusted (SA) data. Reality was that we set another annual sales record.

This column has produced may article on the monthly retail sales report. There are a number of ways to examine the data. How have sales in various categories changed month to month, December to December, or year to year. How have total sales changed, This month I am focusing on December only data, as well as end of year data.

We had a recession last year. This is not headline news. We saw the economy intentionally shutdown. We saw shortages in grocery stores. We saw mass hoarding. We saw our second retail sales recession since 1992. The first retail recession happened under Former President Obama during the Great Recession. The Great REcession was a Retail Recession, a Housing Recession, both new home and existing homes, and a Jobs Recession. These three recessions revealed themselves in the Gross Domestic Product contraction, the official recession data.

The Current Month Data, Rolling Year Data, and Current Year data show growth has begun, again. The big picture here is that December total sales were up more than 4% from December of 2019.  The rolling year, and current year, growth rate was 0.36%. That is very weak. We saw three consecutive months of same month declines during march,  April, and May. We saw the current year growth rate decline from April through November. The rolling year growth never declined.

The Restaurant Recession Begat the Grocery Story Expansion. Grocery stores saw an 8% growth rate this year compared to a 21% decline in Restaurant and Bar sales. If bars and restaurants are shut down, sales plummet.

Look at the reports. Follow the data. The media wanted you to be miserable under President Trump. 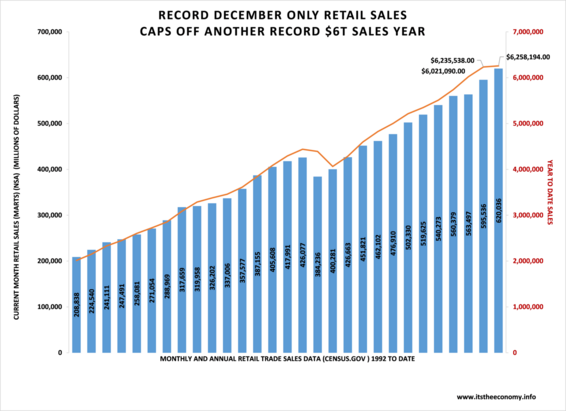 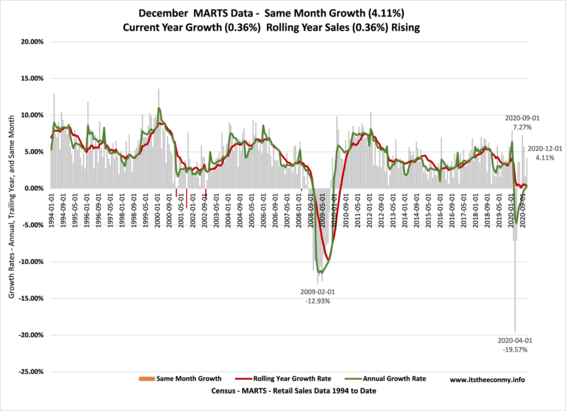