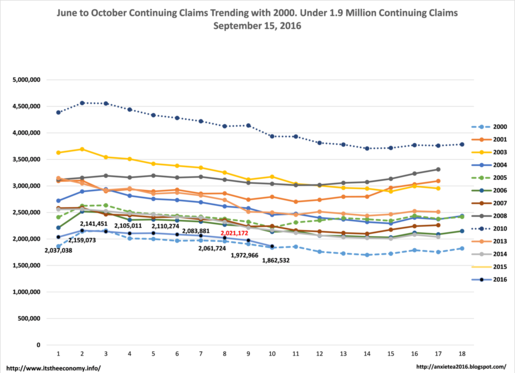 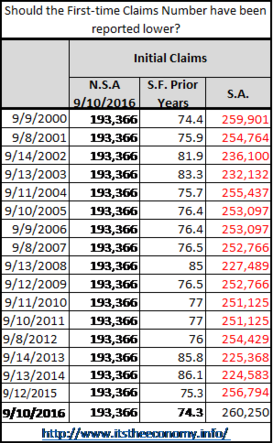 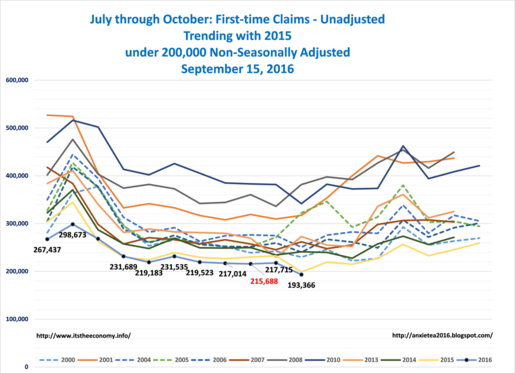 Alarming Unemployment Numbers - Should the First-time Claims number have been reported much LOWER?

The Department of Labor releases a weekly unemployment claims report. The two main numbers are the first-time unemployment (FTU) number and the continuing claims (CC) number . The recorded value is the non-seasonally adjusted (NSA) value while the reported value is the seasonally adjusted value (SA.) The seasonal factors used to convert the NSA data to the SA data change from week to week, month to month, season to season, and year to year for the same week of the year. When seasonally adjusted data is compared False Assertions Considered to be True (FACTs) are created. The mother of all FACTs is that we have had 80 weeks on SA FTU claims under 300,000. The streak actually began this past January.

The First-time Claims Number was reported at 260,000? Should they have been reported lower? If we used any seasonal factor from the second week of September that has been used since 2000 we would have reported numbers as low as 225.000. What would the headlines have been if that number was reported. How does this jive with the workforce participation rate? It Doesn't.

The Continuing Claims Level dropped below 2 Million. Really?   The NSA CC value reported last week were revised down from 1,974,691 to 1,972,966. The data for the prior week, August 20, was revised up from 2,015,357 to 2,021,172. This is comparable to where we were during 2000. The problem is that the workforce participation rate is not the same as it was back then. We had 8 million unemployed workers during mid-August. This is the unemployment level that will be reflected in the next Jobs Report. These are only the people who are collecting claims - not the ones who are unemployed without benefits.

Does this report mean much? Not until we see unemployment claims increase as the economy softens. It is softening, as was reflected in the other report released today, the MARTS retail report.