New Home sales should improve from July and from August of 2016. Looking at the new home sales graph, prior to the recession we "always" sold over 46,000 units during August. We have seen improving sales since August of 2010. we should see continued improvement. Projection: 49,000 to 53,000 Units sold.

The New Home Average Sales Price Could Set Another August Record.  The average sales price of new construction homes has increased as the houses get larger, land becomes more expensive, and the upgrades have become expected. Labor costs may spike as more restoration work is undertaken. Labor costs will cause sales prices to surge. We temporary broke the $400,000 price level before the revisions took hold to the May New Home Sales data.  Will it be $369,000 or $374,900,or  $379,900, or $384,900? Anything is possible. Either the excess supply drags down the price or the lack of existing homes temporarily drives up the average price. What is going to happen when Florida and Texas "steal" construction workers from other regions? Projection: $374,900 to $379,900.

The Existing Home Market Has Almost Returned to Pre-Recession Levels of Units Sold. There was a little lull last month where the number of units sold during July was the same as what was sold during July of 2016. We should see a increase from the July level and an increase from the August 2016 level of units sold.   It is unlikely that we will see a drop in units sold, although it is an historic possibility. WE have a long way to go to reach the 600,000 unit level. If we base the projection on the monthly growth we should see 539,000 at the high end. If we base it on annual growth, we should see 576,000 at the low end.         Projection 539,000 to 549,000 units.

The Average Sales Price Should Continue to Creep Higher.  It is always challenging to project record high after record high. The data indicates that no matter if we look at the monthly contraction or the the annual growth that is expected, both indicators point to a new record.

All of the data indicates that August should have been  month for real estate.How many new homes were destroyed by hurricanes? How many existing homes that were listed or under contract were damaged or destroyed? Will we see positive or negative impacts over the next month or year? Could we see a Katrina/Rita/Wilma spike in activity? Time will tell. 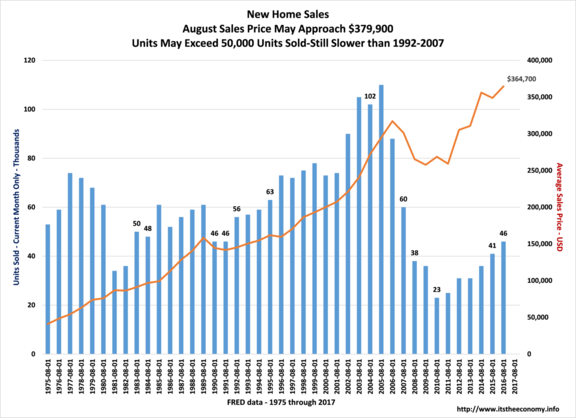 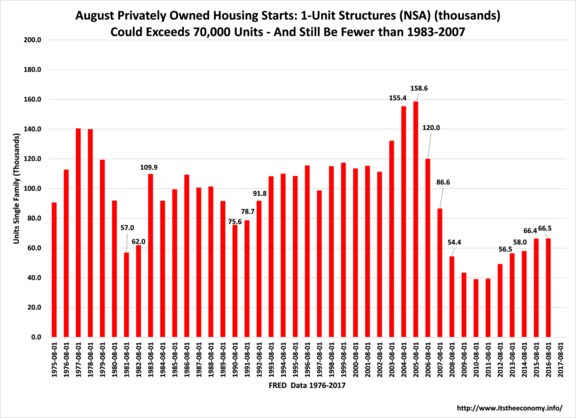 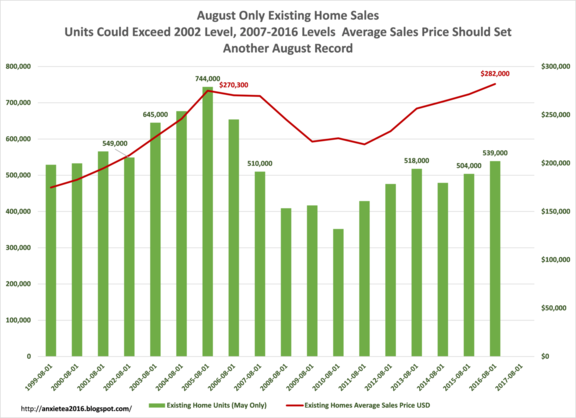 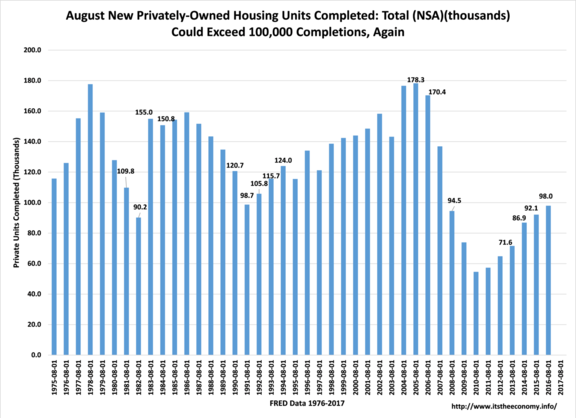 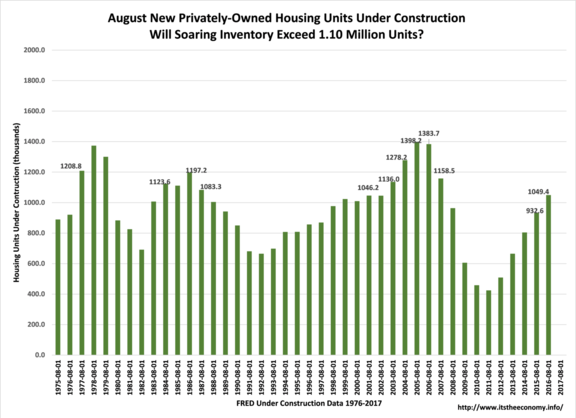 The monthly reports on new home construction and new home sales, as well as the report on existing home sales, are important for "everybody" even if you are no in the home purchase market. The volume of real estate sales has impacts on other sectors, especially the retail sector. The July New Home Construction Report revealed strength in starts, under construction, and completions. The data was better than the July data from 2008 through 2016. Crickets. The July New Home Sales Report showed that we should see between 598,000 and 622,000 units sold this year - higher than the estimates of the authors of the report projected.  The July Existing Existing Home Sales report showed that the real estate market is nearly back to the 2002 levels of sales, and that July homes were selling at a faster pace than what was recorded during July 2008 to July 2016. We could see an annual rate of sale of 5.5 million to 5.625 million units - and that the supply shortage still exists. That is the background for this three part, one article, analysis of the three upcoming reports.

The New Construction Report Should Show Continued Strengthen for now. First, the destruction seen as a result of Hurricanes Harvey and Irma with impact the new and existing home sales market, as well as the new home construction industry. We were in a period of cheapening money and growing sales through 2005 and rising prices through 2006. We had one of our worst hurricane seasons ever during 2005. Will new construction efforts be spent on reconstruction. How many homes under construction were lost? How many existing homes that were up for sale are now "off the market" due to flooding or outright destruction? This is for us to discover over the next few months and years.

New Home Starts Should Exceed 2016 Level - May Approach 1990 Level. This is how bad the housing recession was. If you look at the data, August starts during the recession were lower than from 1975 through 2007. We should be up for the seventh straight August. Projection 68,000 to 76,000 units.

Strong Starts plus Strong Under Construction Should Mean Strong Completion data. The data for completions leans toward a number over 100,000 non-seasonally adjusted units. It is very possible that we could see data similar to what we saw recorded during the 1990s. We will most likely see the best data that we have seen for the month of August since 2008 Will it be reported?

These new homes have to find buyers. We have had strong jobs numbers for months. We have more full-time buyers during August of this year than any other August in history. We are emerging from the seven year credit freeze on people who have gone through bankruptcies and foreclosures. The author is no longer a Realtor, nor is he an attorney. This column, and all of the articles, examine the data and make economic forecast or explain what happened.