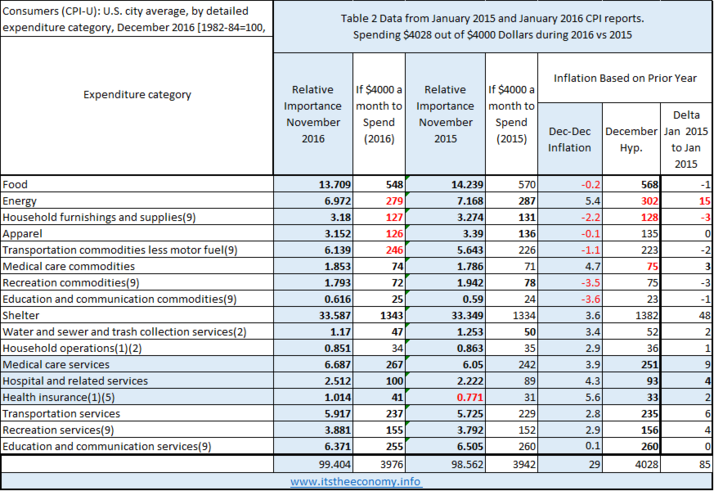 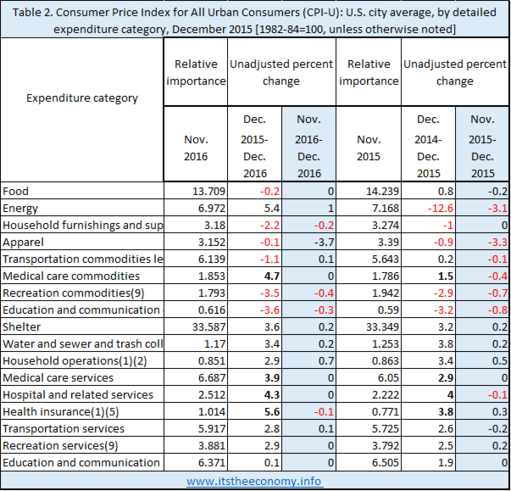 The December Consumer Price Index Report was released January 18th, two days prior to the Inauguration of President Trump. Do you remember it? The report, not the inauguration. The CPI data records increases in various sectors and can e broken down to the nth degree. The problem is that each sector and sub-sector has its own seasonal factor that can change from month to month and year to year. Buying blueberries is more expensive some months than other months. The problem is that we literally, and figuratively, need to compare apples to apples and oranges to oranges. The rest of the people reporting on this data like to exclude the "volatile food and energy" sectors. I wish I could exclude those items, however they are essential in this day and age. So what happened?

What Energy Savings? Energy Up 5.4% over December 2015. Where is the media covering the higher prices at the pump? They were all over the "gasoline stimulus." What about a gasoline depressant?

Do you feel like you have less money in your pocket? You Probably do. The changes in spending and the changes in seasonal factors can be eliminated if we compare costs this year to costs last year while holding seasonal factors constant. If we allocated our cash the way the government said we did then we would have spent $3976 of $4000 across 17 categories. Last year that would have cost us $3942. This difference in spending would indicate minor inflation of $24 during December, except they skewed the Medical care costs. Did we spend $41 a month on health insurance, $31 or $33? "Who can find insurance at $41 a month" may be a better question.  Did hospital service jump from $89 to $93 or $100? Did medical care services jump from $242 to $251 or $267? Did we spend $3976, $4028 or $4059 for $3942 worth of goods and services last month compared to December 2015? It's your money.