President Trump has added fewer part-time jobs than any of his predecessors after his first three months in office.  A story that had been missed by most people covering the jobs market has been that there was a Part-time Iceberg created under President Obama. Part-time job creation partially offset full-time jobs losses. It could have been an even worse jobs recession.  This Iceberg was first identified in this column during March of 2016.

President Trump has shed more unemployed workers during his first three months in office than his predecessors. President Obama saw unemployment climb through his first full year in office. President Regan inherited a recession, too. Even President George W. Bush inherited a recession - his took hold after September 11, 2001. If there is an "unfortunate" confluence of factors it is that, as with Reagan, President Trump's reduction in unemployment is partially offsetting his job creation, meaning that while his participation rate is growing, it is not growing as fast as it could be.

This column has had a considerable number of articles inspired by Internet Memes. The Whopper of all Internet Memes, at least at its inception, was the "Number of Jobs Created by President Obama" meme. The authors of that meme made four mistakes; They compared President Obama before the end of his term with Presidents at the end of their terms, they included George H.W. Bush who only served one term; They excluded President Reagan's accomplishments; and they were looking at job creation from the lowest point in President Obama's term in office. That first column was a three-part series "Four Presidents at 81 Months." Seasonal factors impact every President. Every President loses job during Month 96 - the month of the new President's Inauguration.What was uncovered after 96 months of President Obama was that he had recovered all of the lost Full-time jobs from the Great recession, That after losing 5 million jobs under his watch he added 14 million jobs. This means that he added 9 million jobs for 19 million new workers.

This column has coined a new economic indicator over the past year or so: The U-7 Unemployment Rate. The U-7 rate factors in the participation rate for the same calendar month over a period of years. President Obama saw his unemployment rate fall over the past seven years because unemployed workers were falling out of the ranks of unemployment, not because they were finding jobs. Unemployed workers are participants. People who are neither employed or unemployed are non-participants. Some in the media have been arguing that this is because people are retiring.  Another series, the "Red, Gray, and Blue" series has detailed how there has been a hollowing out of workers between the ages of 35-49 years of age, and how those over the age of 60 are participating more than ever.

Round Three - Participation Matters. This column has been comparing the previous four two term Presidents with President Trump during their first one and two months in office. It takes two data points to create a line and three or more data points to observe a trend. The problem is that there is an incredible variability between months and decades. Another problem is that the media fixates itself on the seasonally adjusted data. This column references seasonally adjusted data - it does not trust it. The best way to measure the data is the number of full-time jobs, part-time jobs, and unemployed workers created or lost each month and at the same point in a President's Presidency. Participation has been improving under President Trump as we have seen roughly three million non-seasonally adjusted jobs added during the past three months and as unemployment has decreased during the same period of time. 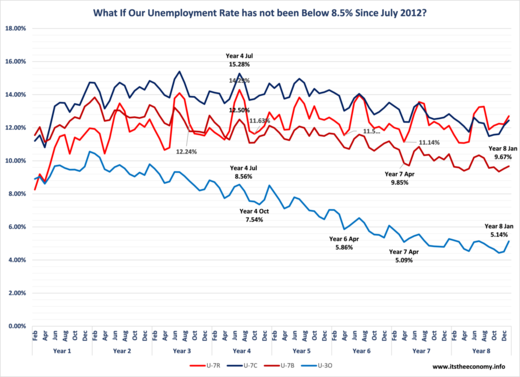 We are still missing million of participants. President Trump inherited the lowest participation rate of the five Presidents.

The Official  Unemployment Rate of 4.1% Seasonally Adjusted and 4.4% Non-seasonally adjusted are misleading economic indicators. They are misleading because they does not take into account the participation rate. If someone is not employed or unemployed there are the silent missing worker, the uncounted missing participant. If we factored in the missing participants for the month of April based on the prior President's Participation rates and added those people to the official unemployment level we could calculate the U-7 unemployment rate. The Obama U-7  dropped under 10% for the first time during May of 2015.

Why is it called U-7? U-6 was taken. The Official "underemployment Number is 8.1% non-seasonally adjusted or 8.6% seasonally adjusted. If you look at the FRED graph that was tweeted out earlier. You are starting to hear more about this calculation of unemployment rate as it drops below 8%. It was rarely reported during 2007, 2008, or 2012.

The real reason why Hillary lost the Election was that people trusted their numbers better than hers or the Government's. There was plenty of discussion how President Obama could not win re-election during 2012 if the U-3unemployment rate for President Obama (U3-O) was above 8% at election time. Viola. It was 7.54% during October and the November rate was released to late to impact the election. Shocker! It was over 8% by Inauguration day 2013.  What if this column had created the U-7 factor during 2012?We would have had a U-7 rate in excess of 12%. There were some people who did not feel better off after 8 years of President Obama as compared to eight years of Presidents Bush, Clinton or Regan. They were more observant than some in the media.

This column started with a scorecard. President Trump has overseen the creation of more full-time jobs after three months than Presidents Reagan, Clinton, George W. Bush or Obama. He has also seen the largest drop in the number of unemployed workers since his Inauguration. He started with the lowest participation rate of these five Presidents. He has added the most participants. Participation matters.