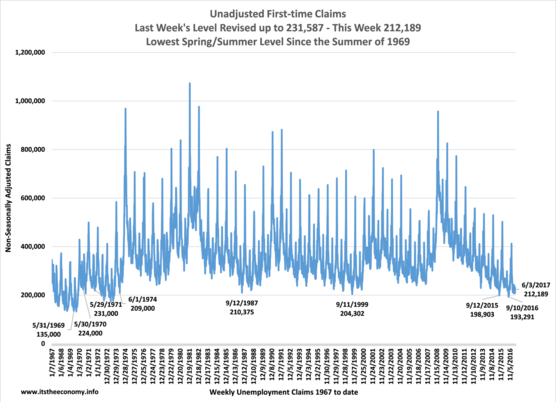 There were times when the weekly unemployment claims data was headline news. People would "drop everything" at 8:30 on a Thursday morning to see if we had fewer than 500,000 or 400, 000 or 300,000 seasonally adjusted (SA) first time claims (FTU.) Sometimes, not often, they would focus on the SA Continuing Claims (CC) data. Now the data is below the fold, in column, one paragraph or two, on the business page and maybe the "crawler" on television. We are experiencing historically low levels of Non-seasonally adjusted (NSA) FTU and CC claims and "nobody" is paying any attention to it. If a tree falls in the woods, and nobody is present, does it make a sound? If the economy is in a recovery and expansion mode and no business reporters report on it on television or in the newspapers is it just a blogger's random story? Is it Fake News? Hardly.

We Saw Continuing Claims Fall Again. The data from last week, the week ending May 20, was revised slightly higher from 1,759,793 to 1,763,206 claimants.This week the level fell to 1,742,892 claimants.The last time that these claims were near 1.7 million people was September of 2000. We normally only see claim levels this low during the final week of September or the first week of October.

We Saw the First-time Claims Level Drop after Last Week's Datum was Revised Higher. The NSA FTU value from last week was  higher from 225,526 to 231,587 claims. This week that value was recorded at 212.189. We are seeing September level of first-time claims during May.We have fewer NSA FTU claims the first week of June 2017 than we had during the end of May....1970. Could we see the NSA FTU number fall below 200,000 this Summer? Will we have to wait until September?

What Difference Does It Make? Right now the media is obsessed with "all things Comey." Right now people are more concerned about fiction than reality. The jobs data indicates that full-time employment is up, unemployment is down, and multiple job holders are down under President Trump. Part-time workers do not earn unemployment benefits. Multiple job workers do not claim unemployment benefits when they lose one job.  The majority of the media is being distracted by items that have very little meaning to most people. We are concerned over jobs, unemployment, inflation, and housing.

It's the economy - not the eComeymy 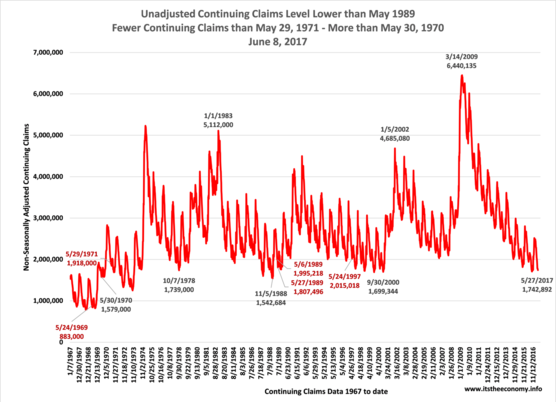