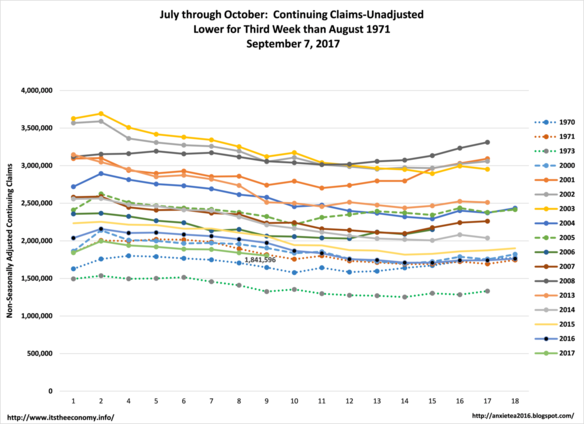 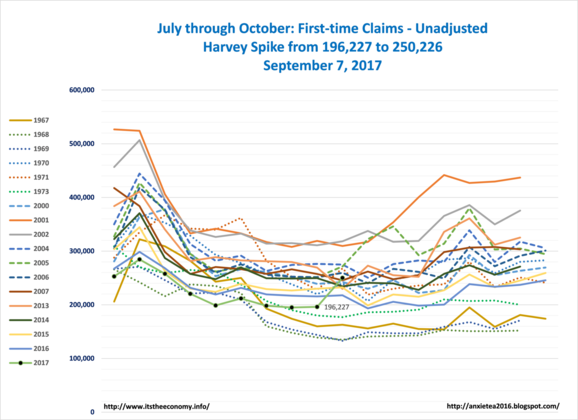 The First-time Unemployment Claims number, non-seasonally adjusted, had been at or near fifty year lows for this time of year. The normal trend is for first-time claims to slide through the end of September and for Continuing claims to hit their annual low during the first week of October. This week was the first week where the impacts of Hurricane Harvey were referenced in the weekly report. Hurricane Harvey came ashore on August 26th, meaning that its impacts would not be recorded with the 8/26/17 data. You need to be unemployed for one week to qualify for claims, so the earliest that this should have been observed was 9/2/16.

The First time claims data spiked by 54,000 claims. If you dig into the actual report you will see that the unemployment claims for Texas jumped from 12,105 to 63,742. This means that the rest of the country saw roughly the same level of first-time claims as last week.

The Continuing Claims Number declined from 1.841 million to 1.802 million, non-seasonally adjusted. The seasonally adjusted data also fell from 1.945 million to 1.940 million. The continuing claims data lags the first-time claims by one week. We should see a similar spike in the continuing claims number next week as we did the first-time claims number this week.

This is an important event. Hurricane Harvey inundated the state of Texas and a good part of Louisiana with rain. Will these people seek employment in their most recent city of employment or will they relocate to other parts of the country? What will happen with the unemployment claims in Florida when Irma hits? Will we see employment in the area improve in various sectors as reconstruction is initiated? The data will only document the impacts - it cannot translate the human impact.

Hang on, it is going to be a bumpy ride.