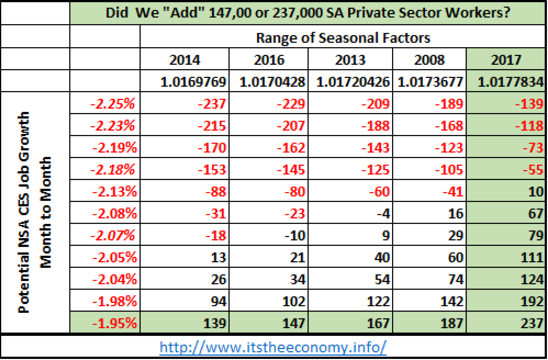 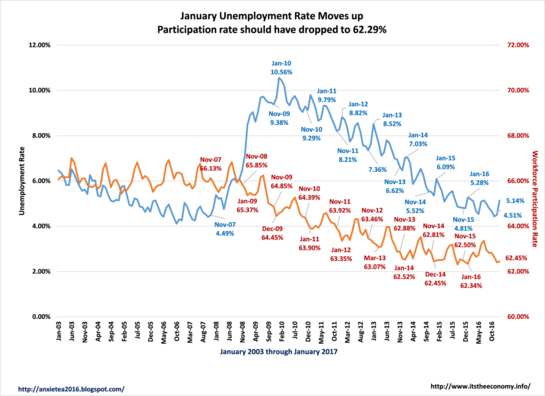 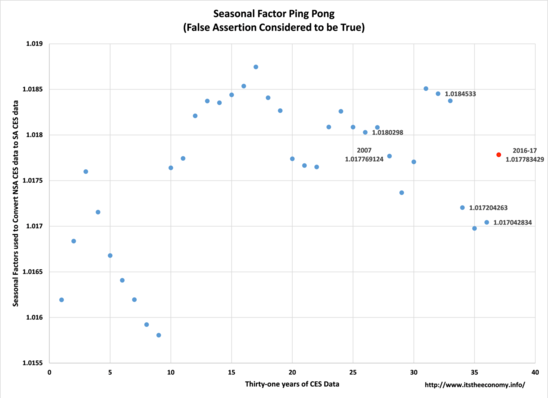 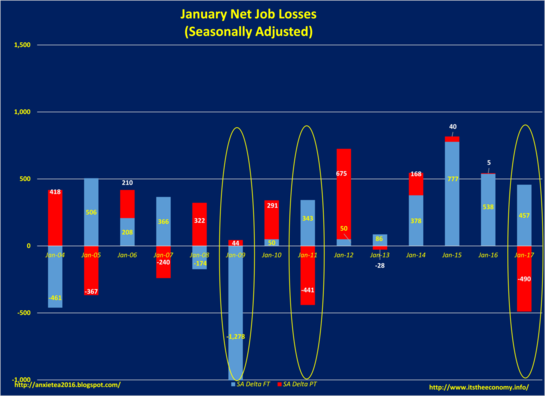 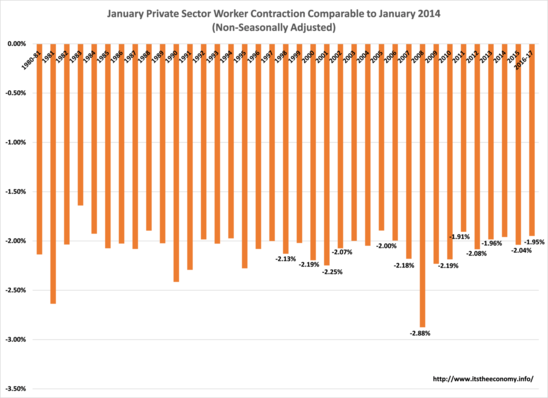 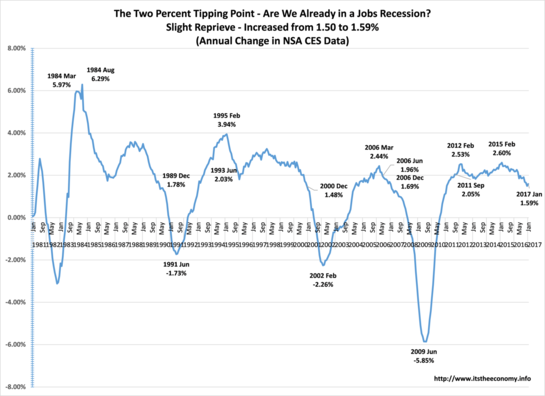 The release of the monthly Jobs Report, or Employment Situation Report, accompanies the release of a considerable amount of data. The headline number, the seasonally Adjusted (SA) Current Employment Statistics (CES)  Non-Farm Payroll Number was reported at a gain of 227,00 workers.This differs from the Private Sector Worker number which has been the basis of the former President's "Jobs Streak." That number was reported as a gain of 237,000 workers, seasonally adjusted, after a downward revision of the December data of 39,000 workers. This means that the "real" headline number should have been reported at 198,000 workers. The problem is that the number of private sector workers, non-seasonally adjusted fell by 2.407 million workers. Fell. Millions.

The second data set is the Current Population Survey (CPS) data. This data is used to calculate the unemployment rate, the participation rate, and the number of full-time and part-time jobs gained or lost during the month. The recorded value is the non-seasonally adjusted data. The reported value is the seasonally adjusted data. This column produced a forecast column "Jarring January Jobs Forecast" in which the range of seasonal factors for the CES Private Sector worker number and a range of growth rates was published. The seasonal factor used this month was skewed (high) which means that the reported value was skewed high as well.

The devil is in the details. The seasonal factors were skewed for both the Current Population Survey data and the Current Employment Statistics data. The population data was drastically revised downward, providing an imaginary bump to the non-seasonally adjusted (NSA) workforce participation rate. The other missing story in other coverage is that part-time jobs fell dramatically.

The Headline Number is Bogus. First, the good news: The drop in the NSA Private Sector workforce was not as great as projected or expected. We normally lose at least 2.00% of our workers during the January reporting period. Part of this is due, in part, to the situation where the November and December NSA Private Growth data were both revised downward. November was revised downward by 105,000 jobs. The revisions to the December data was only 52,000 which means that in reality the December data was better than originally reported. Now the bad news. The seasonal factor was skewed massively. The seasonally adjusted private sector work was revised down by 39,000. This bounce made the SA CES private sector worker number look good. If we had seen the seasonal factor for January 2016 used we would have had a "jobs" number  of 147,000 "jobs" added. Subtract the bump of 39,000 and the real worker value would have been reported at 108,000. If we used the seasonal factor from 2014 the official private sector worker number would have been reported at 139,000 and netted a paltry 100,000 "jobs" added.

We recorded a LOSS of 555,000 Full-time Jobs Recorded and reported a GAIN of 457,000 Full-time Jobs. The CPS data, also known as the establishment data, records jobs gained and lost, full-time and part-time. This full-time jobs loss was within expectations. It was comparable to what we saw during 2015 and sligthly better than January 2016. These were most likely seasonal retail and restaurant jobs.

We saw a loss of 715,000 part-time jobs recorded and a loss of 490,000 part-time jobs reported. I should say "reported" in air quotes because nobody reports this data. They would have to explain how a net job loss is converted to a net worker gain. This was the largest  drop of NSA part-time  jobs in over a decade. This is a fundemental shift. If you combine the SA FT job gains and the SA PT job losses we had a net jobs loss of 33,000, not a net gain of 237,000 workers.

Unemployment spiked by almost one million workers. The good news is that this is a seasonal event. It happens almost every year.This was a larger spike than we saw during 2014 and 2016 and smaller January unemployment spike than what was recorded during 2009, 2013 and 2015.

A Spike in Unemployment less than the Drop in Employment Means the Workforce Participation Rate should have reported a drop. Should have reported a drop.The problem is that we had the largest January drop in workforce population since  January 2007. It was even worse of a December to January drop than was recorded during December 2006 and January 2007. Remember, the housing recession began at the outset of 2007. The Jobs recession started after July 2007. The number if jobs during July 2008 were fewer than what were recorded during July 2007. If we just used the workforce population from December 2016 then workforce participation rate would have dropped to 62.29% instead of bumping up to 62.45%. This still means that the participation rate for January 2017  is down nearly 3% from January 2009 and equal to where we were during January 2015.

The emerging Worker Recession has taken a pause. The NSA CES Private Sector Worker growth has been anemic. When the number drops below a 2% annual rate of growth we are in a very weak economy. Last month the growth rate was 1.54%. This month the annual growth rate is 1.59%. This is well below the 2.0% tipping point.

The Net Net is that the January Jobs Report was Bogus and Not Bad. It was bogus because we saw the Private Sector Worker Number augmented by a false seasonal factor. The good news was that the workforce contraction, non-seasonally adjusted, was not as bad as it could have been. We saw worse than expected part-time part-time job losses. We saw a population drop. We saw the number of participants drop and still saw the participation rate edge higher.  This column will analyze the data for the "Four Presidents Column at 96" months article, the "Job Sector" article, the "Aging Workforce" article, and the "Women v Men" article

It's the Economy. It's your economy .It's Obama's Last Jobs Report. 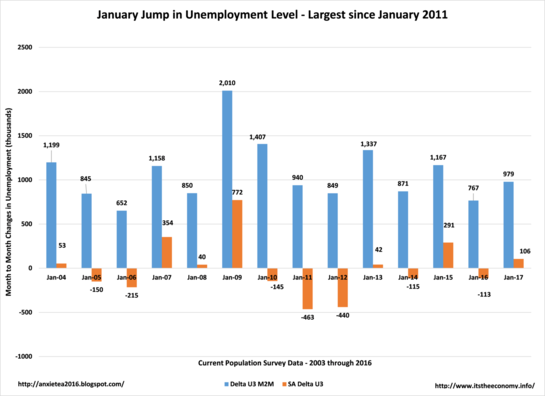 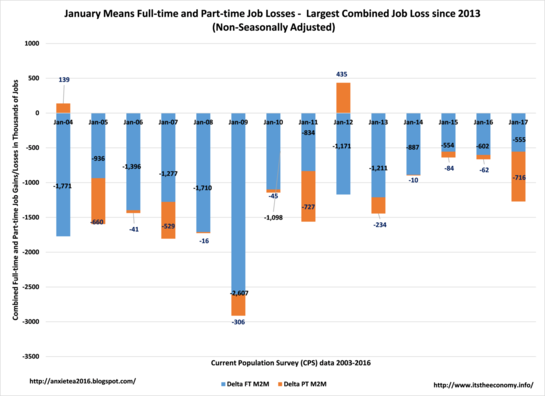