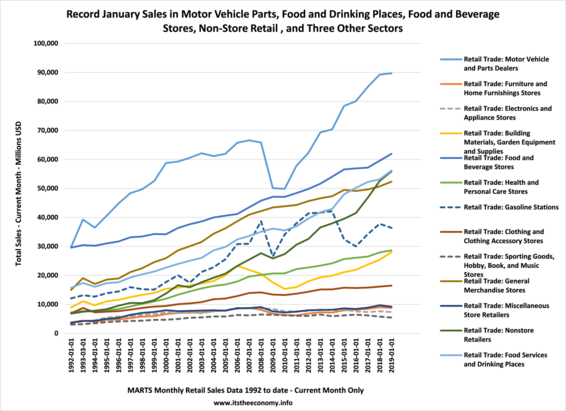 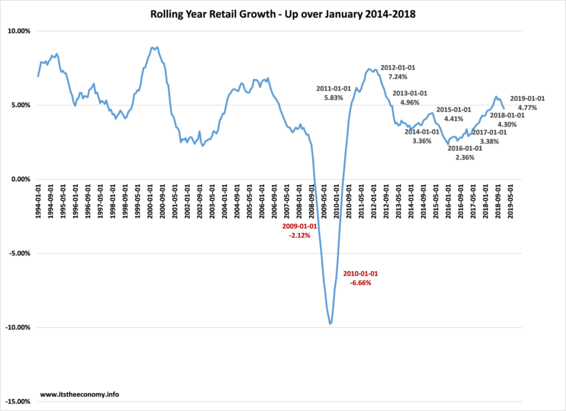 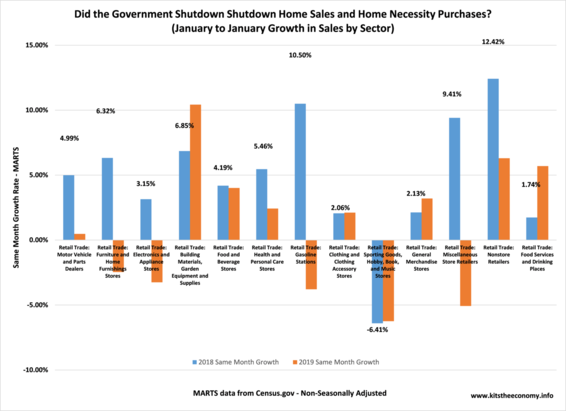 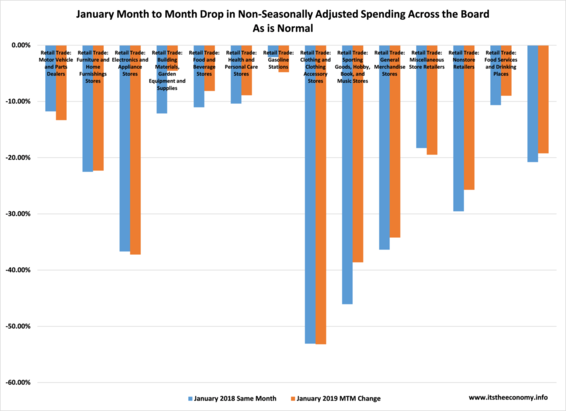 The December data was a "surprise to the downside" even though we had a record December Retail month and a Record Retail year for 2018, based on the non-seasonally adjusted data. January is a month where all sectors pull back off their peak December sales. This January is no different. The good news is that the annual rate of growth is above where we were last January.

We set a January Total Sales Record. This year we saw 456.426 billion dollars in total retail sales. The sectors that set personal records include Motor Vehicle and Auto Parts (MVP,) Building Materials and Garden Equipment (BMGE,) Food and Beverage Stores (FBS,) Health and Personal Care (HPC,) Clothing and Clothing Accessories (CAC,) Non-Store Retail (NSR,) and Food and Drinking Places (FDP.) Gasoline sales were down from last year. The "outliers" this month were in the Furniture and Furnishing Sector and the Electronics and Appliances Sector. Sporting Goods and Hobbies continue to show weakness as a sector.

The January versus January Growth indicates that there was some impact to the Retail Sales from the Government Shutdown.  The new construction data and the existing home sales data indicated that there may have been a slowdown in home sales due to a slowing of the loan approval process. This slowdown may have been created by the the Government Shutdown. The indicators here are the drop in Furniture and Furnishing Sales, EAS sales, and Miscellaneous store sales compared to relatively strong growth in these same sectors last January.

The Rolling Year Growth is off its peak, above last January. Rolling year sales, the combined sales of the past twelve months compared to the same time last year, is a lagging indicator. It tells us where we have been. The problem is that the current year data is only one point and one point does not make a trend. It is important to remember that we are coming off a record December and a record year. The rolling year growth is at 4.77%, up from January 2018 when we were at 4.30%, and the best February read since February 2013. If we continue growing at this past we should hit $6.25 Trillion in total retail sales.

The Month to month data was not pretty, and it "never" is pretty. Every sector saw decline in sales compared to December. There are massive sales during December, and massive returns during January. The drop in sales was slightly larger than 2018 in MVP, Furniture and Furnishings, and Miscellaneous Store Sales.  These are mostly big ticket items. The drop may have been a delay in purchases and not a denial of purchasing. The decline in gasoline sales month to month and same month may have pulled down total sales more than would normally be expected.