The Monthly and Annual Retail Trade Survey (MARTS) data measures where we are spending or money. We have seen that some sectors have not recovered to pre-recession levels. Some sector were barely impacted by the recession. Some sectors have been slowing during the tail end of this recovery. It has been an incomplete recovery.  This month's report revealed that there were some sizable surges in month to month spending. There were also nearly a billion dollar of downward revisions to the October data.  It also revealed that there were some declines in same month spending from November 2015 to 2016. Some sectors still are not back at November 2007 levels.

Three Sectors Still have not recovered to Pre-recession Levels. Gasoline Sales, Appliance Sales, or Furniture Sales are all lower than they were during November 2007. It is the opinion of this writer that the Great Recession was created by a waning housing market, a weakening jobs market,e plus a huge spike in gasoline prices. Right now we have a weakening jobs market,a weak housing market, historically speaking,  rising gasoline prices, and a weak new and existing home data.

Retail Sales are Growing - It may be the Best Year Ever. Unless the wheels fall off the retail sales boom we will end with a better total retail sales level than ever recorded. The retail sales have been slowing - yet still growing. The recovery is incomplete. Not all sectors have fully recovered to pre-recession levels. Some sectors are faltering now.Will rising gasoline prices set off another retail recession? 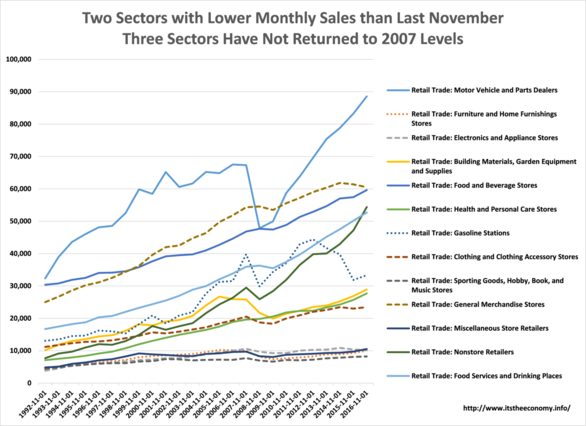