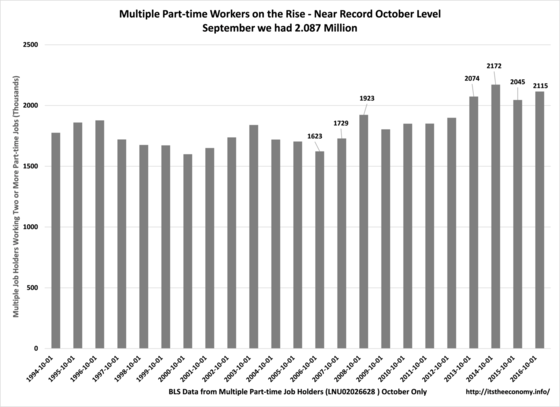 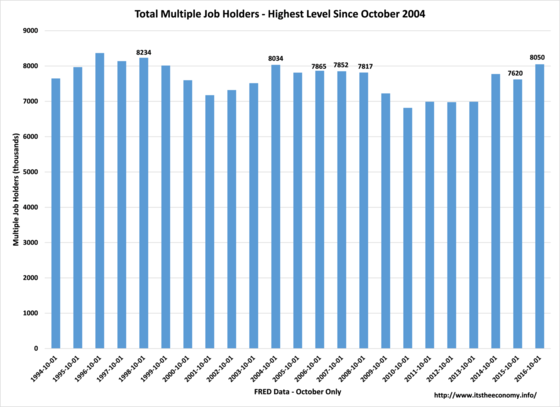 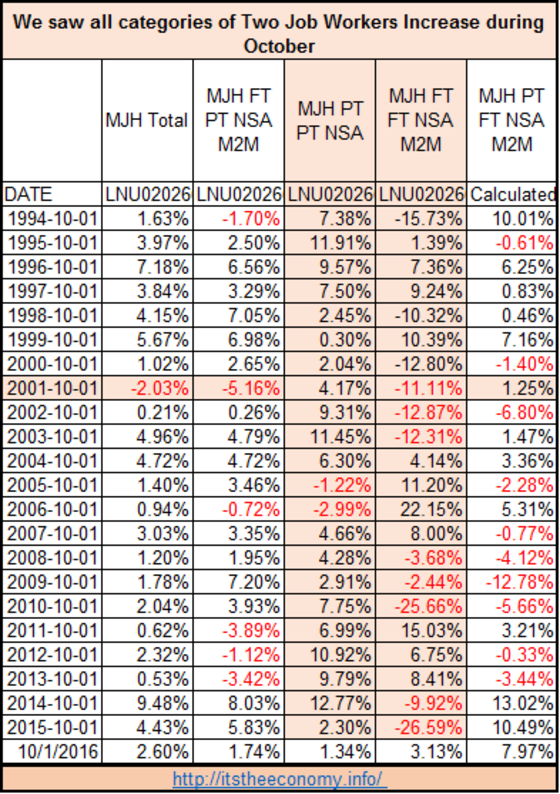 There are Over 2 Million Workers Working Multiple Part-time Jobs

There are many ways to analyze the official jobs data numbers: Full-time and part-time workers, Unemployed Workers, Unemployment rate, participation rate, the number of men working, number of women working, the number of jobs created under a President and the Effective Unemployment Rate,  the recovery, or lack thereof, of the jobs sectors in the United States, and the number of people working two jobs. This column has published many article on the Multiple Jobholder Surge this year. October continued the general trends that were observed last month.This past week this column published a forecast column for the Jobs Report as well as theMultiple Jobholder Statistics.

We have over 8 Million People Working Multiple Jobs. This is the highest level of workers working multiple jobs since October of 2004. We were in a growing economy during 2004. We had fewer than 8 million multiple jobholders during October of 2007 and 2008. This surge in people working multiple part-time jobs coincides with a time where fewer men are working full-time jobs and more men are working part-time jobs than at the peak of the jobs market during 2007.

Why the surge in Multiple Job Working Workers? This also comes as the Kaiser Foundation  revealed that fewer companies with under 50 employees are providing health care benefits to their employees. Remember that the Affordable Care Act requires companies with 50 or more full-time equivalent employees (based on 2080 work hours) must provide health care benefits or pay a penalty. The same ACA calls a full-time worker someone who works over 30 hours a week. The Bureau of Labor Statistics counts anyone who works 35 hours a week or more as a full-time employees. This means that these employers are reducing the number of FT workers and hiring more part-time workers. Will the employers continue this behavior when they realize that the penalties are based on full-time equivalent hours and not full-time workers? Will they hire more employees to work overtime because overtime workers hours do not count to the FTE hours? Will they hire more seasonal workers because their hours do not count to FTE hours?

Two Million workers are working Multiple Part-time Jobs. We have almost the highest level of workers working two multiple part-time jobs during the month of October ever. It was thought that the surge in people working part-time jobs would carry over to those who were already working one part-time job.