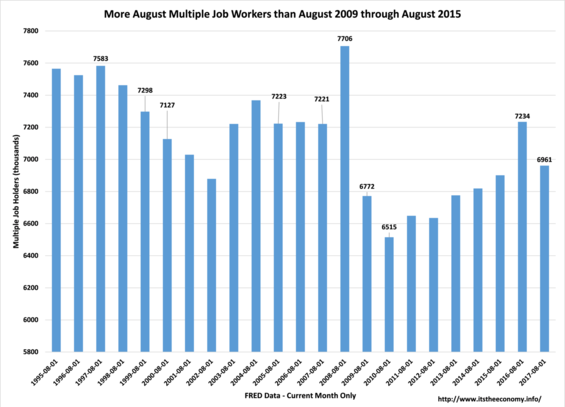 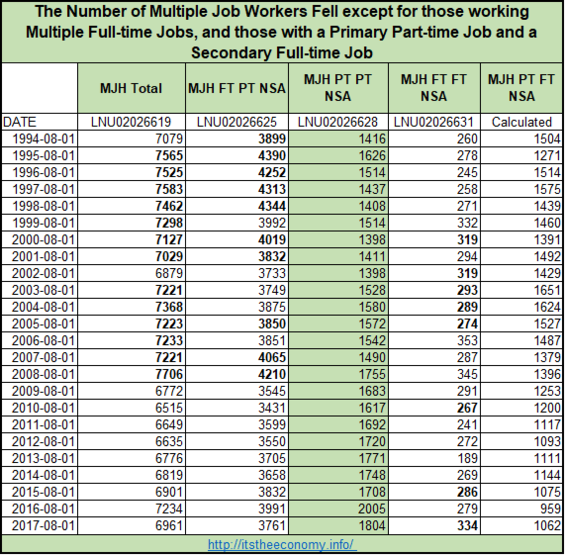 The monthly Employment Situation Report for August was released last week. The report revealed that it was better than the Jobs report for August of 2015 and August of 2016. We also saw more non-seasonally adjusted (NSA) Current Employment Statistics (CES) private sector workers added during President Trump's first seven months than Presidents Reagan, Clinton, Bush 43, or Obama. If you dig further into the Current Population Survey (CPS) data revealed that President Trump has added more full-time jobs than Presidents Obama and Bush, and shaved off more part-time jobs than President Clinton and reduced the unemployment more than President Reagan. It is also important to note that President Trump started with a lower participation rate than any President since 1981. It has been proposed in other articles on this website that the lower participation rate could be due to an elevated level of multiple job workers.  It was thought, prior to the release of the Jobs Report, that we could see an increase in the number of multiple job workers, especially the number of people working two part-time jobs.

The number of people working multiple jobs dropped month to month and August to August. If you look at the month only table or the growth table you can see that this drop in multiple jobholders and multiple part-time workers was unusual. The data is comparable to where we were during August 2015.

Interesting Drop in the Number of People working two-part-time jobs. If you look at the August values for post election years you will see that during 1997, 2005, 2009, and 2017 that the number of people working two part-time jobs dropped from the prior August. The number of two part-time job workers increased during 2001 and 2013. We were in a slowdown during 2001 due to the "DotCom" bust. We were still in a strong recovery mode during 2013 with "Obamacare" looming. It is also important to note that this is the second highest level of August Dual Part-time workers on record.  August also tends to be a "low month" for the PT PT workers. This means that the number should increase through November and possibly March of 2018.

Third Highest Level of People Working Two Full-time Jobs for the Month of August. What are the quality of the jobs that these people are working? Do they want full-time jobs or do they have to work two full-time jobs to make ends meet?

This data came as a bit of a surprise. The trend for dual jobs and dual PT job workers has been higher each of the past August Jobs Reports since 2010, It appears that last year there was an election year bump. We may see a similar pattern next month with regard to the jobs data and the multiple job worker data.  Will the number of multiple job workers decrease as participation increases? Will they drop as the number of full-time jobs continue to increase? Time will tell. 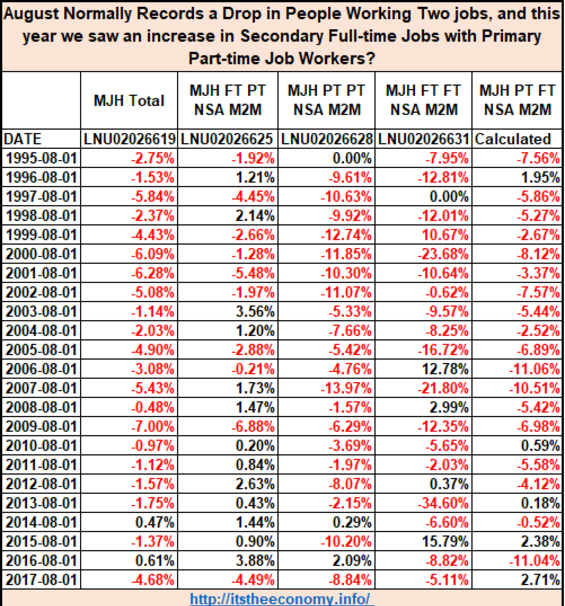