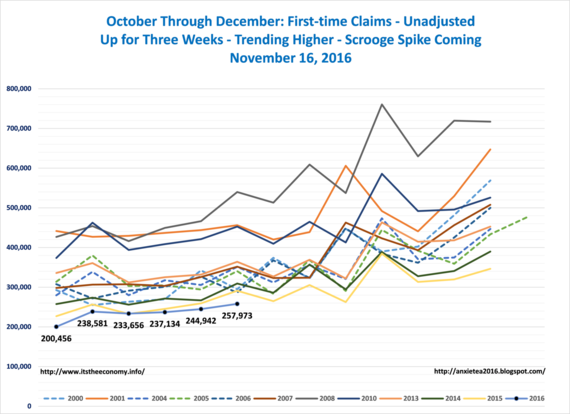 The weekly unemployment claims data is still released every week. Last Thursday there were other stories grabbing the headlines - mostly the Presidential Election and riots. The Unemployment claims report was released with the non-seasonally adjusted (NSA) first-time unemployment (FTU) Claims and the Continuing Claims (CC) numbers. What would have been reported was the Seasonally Adjusted (SA) FTU and CC data. The data that is used to create the FACT (False Assertion Considered to be True) that we have had over 80 consecutive weeks of SA FTU claims under 300,000 claims. We haven't.  Unemployment claims will rise through the end of the year as certain as there will be an end of the year.

First-time Claims climbed higher - Still at 16 Year Lows. Your eyes do not deceive you - we had just over 200,000 claims the first week of October. The fifth week of October we had 257,973. The numbers could bump up again this week. Claims are low because multiple jobholders are so high.

Continuing Claims are higher than they have been during the past six weeks - Still a 16 year Low. The data is skewed low, again. These numbers will creep higher as the first-time claims number rises.

This is the time of year we see unemployment creep higher.  Scrooge is coming. 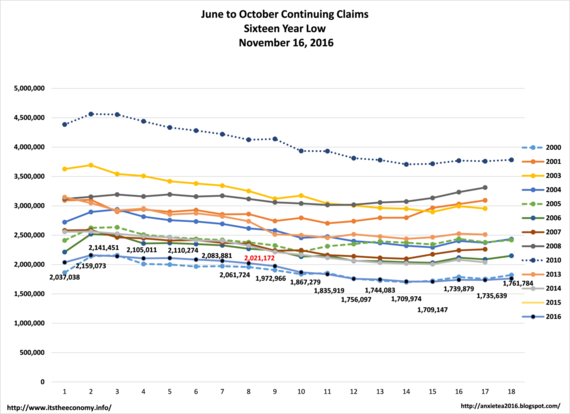