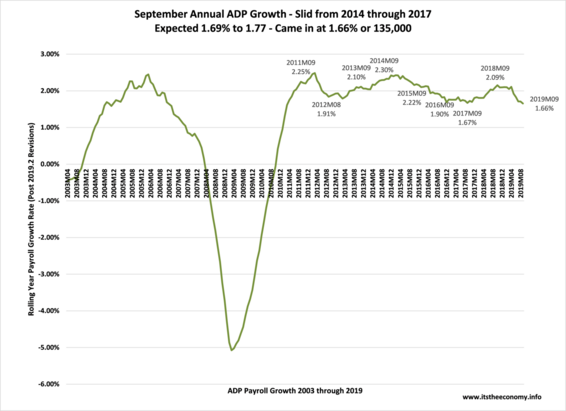 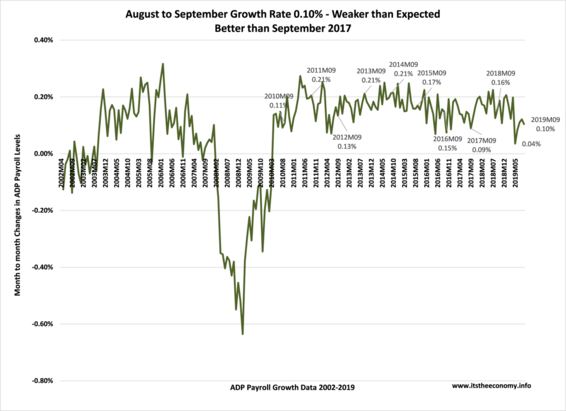 The prospects for a solid Non-farm Payroll report this Friday are good.

The monthly jobs report is one of the most anticipated economic indicators released during any given month. The Jobs report, or Employment Situation Report, is created using two data sets, each with seasonally adjusted and non-seasonally adjusted components. The Current Employment Statistics (CES) data is the wages and workers data. This compares well with the ADP data. The ADP report is a private sector payroll report. The headline CES number is the non-farm payroll data. The NFP data includes both private sector workers and public sector workers. What is expected in the private sector this month, according to the ADP payroll data? There was overlap between 194,000 to 225,000 using the month to month and September to September growth rates. The Current Year data indicated a possible 210,000 to 212,000 value, prior to any revisions to the August date. What was reported in the September 2019 ADP Payroll Report?

Month to month growth was expected between 0.15% to 0.17%, and as high as 0.21%( 194,000 to 271,000.) The month to month data shows that we should see seasonally adjusted growth in all sectors except possibly Information (IT.) The largest growth rates were anticipated in Natural Resources (M/L,) Construction, Professional Business Services (PBS) and Manufacturing. Education and Health Services (EHS) could rivaling Manufacturing.

Nine Sectors Reported growth August to September adding 135,000 payroll positions. The September ADP report showed the strongest growth month to month in Information, Education (EHS,) Construction, Leisure and Hospitality (LAH,) and Trade, Transportation, and Utilities (TTU.) Only Natural Resources declined month to month. The month to month growth rate was only 0.10%. This is only slightly better than the 0.09% reported for September 2017.

Nine Sectors grew September to September. September to September growth was strongest in Construction, EHS, Professional and Business Services, LAH,  and Other Services. We saw a decline of 2.45% in Natural Resources from last September.  Did tropical weather in the Gulf and off of Florida impact the oil sector? Will it rebound next month? The overall annual growth rate was 1.66%. This missed expectations just a little on the low side. This was also comparable to the September 2017 annual rate of growth. The September 2017 annual growth rate was 1.67%

The Current Year data is showing growth from August to September comparable to 2013 and 2016.  We have seen 1.484 million payroll positions created this year, seasonally adjusted. This is a slower pace than 2013 through 2018. It is a better pace than 2004 and 2005. Remember the significant adjustments made with the release of the February 2019 and February 2018 ADP reports.

The ADP data differs from the NFP data because the ADP data does not include public sector data. The ADP data differs by sample size. The seasonal factors for converting the non-seasonally adjusted CES worker and wages data change by sector, month, season, and year. It is fair to presume that the ADP seasonal factors also vary similarly. The ADP data also differs from the headline "jobs data" because the non-farm payroll data includes government workers. It is anticipated that the number of government workers will grow by 7,000 to 19,000 workers this month.  It is still possible to see a 200,000 "jobs report" number even after a 135,000 ADP number.