Yesterday the monthly retail sales data (MARTS) and the monthly inflation, Consumer Price Index (CPI,) data was released at 8:30 AM. This news was obscured by the more important story regarding the attempted assassination of Republican Congressmen at a baseball practice. The data that is recorded is more important the the report that is reported.

Inflation appeared to be "going off the chart." The all items inflation rate was 2.8% during February, non-seasonally adjusted. The world in which some people live, that where we do not have to worry about food or energy during a month, was a mere 2.2%. Food, energy, medicine - who needs it?  Inflation has been waning since that time. Now the unadjusted CPI-U is 1.9%.

Medical Inflation and Shelter Inflation are rearing their ugly heads, again. This column has detailed the changes in shelter costs and "medical" costs (Medical Care Commodities, Medical Care Services, Hospital and Related Services, Health Insurance.) Somehow medical costs that took 5.6% of our monthly spending during May 2015 now only takes up 1.004%. We are seeing inflation over 3% for the past year in Medical Care Commodities, Shelter, Waster Sewer and Trash, Hospital and related services, Recreational services, and 2.9% for Transportation services.

The Devil is in the Data - and the weighting of the data. The MARTS column published earlier today detailed how the non-seaosnally adjusted data for the MARTS report was remarkable and the seasonally adjusted data was unbelievable. Synonyms, no, not in this case. If we had $4000 to spend last may, then we would have spent $3999 last year and $4002 this year using the CPI weighting. If we spent $4000 last year and we experienced inflation at detailed in the report then our costs would have been $4075 this May compared to the $3999 last May.

Medical Expense are up from 2015 and 2016 Levels, except Health Insurance? This is the difference weighting makes. Health Insurance took 5.648% of our CPI spending during May 2015. How did it only 1.004% of our spending this month? We saw a smaller drop from April 2015 to April 2017.We saw a drop from 5.6% March 2015 to 1.01% during March of 2017. So, according to other research in this column, premiums are rising, deductibles are rising, expenses are rising, and they are not taking up as large a part of our monthly spending as they were during 2015. Do we have that much "wage inflation?" No. The numbers are unbelievable. 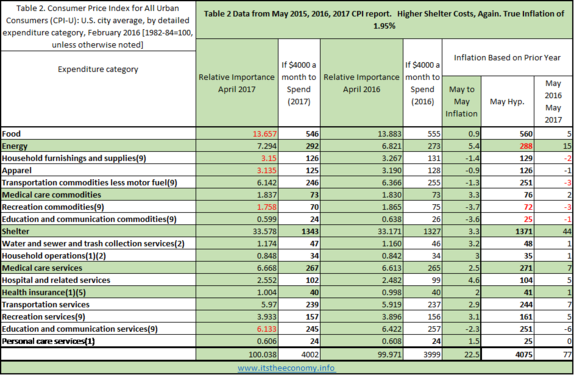 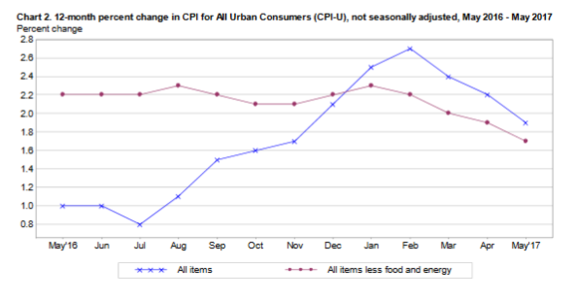 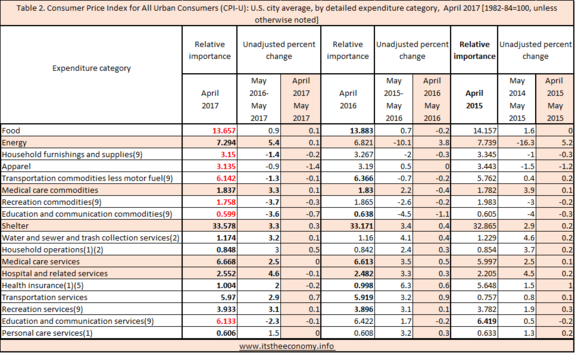