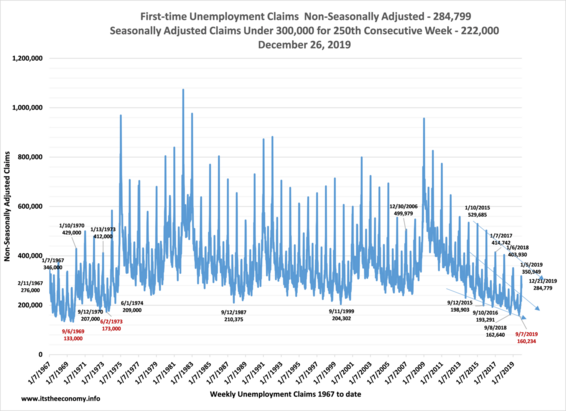 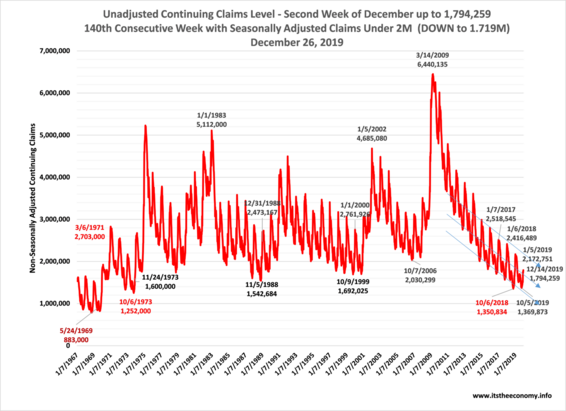 Thursday is Weekly Unemployment Claims Day, except on holidays. The Seasonally Adjusted (SA) First-time Unemployment (FTU) claims data used to garner headlines at the bottom of the 8:00 hour every Thursday morning. This year we had two weeks where we had the SA FTU reported under 200,000. We also set a record with 23 weeks where the Non-seasonally Adjusted (NSA) FTU was recorded under 200,000 Claims. This has been virtually ignored elsewhere. Is it any wonder that people do not know that we were at 249 consecutive weeks with SA FTU being reported under 300,000. We w9re also at 139 consecutive weeks with the SA Continuing claims value being "reported" under 2.0 million. Few analysts comment on the SA CC value. What happened this week?

The Non-Seasonally Adjusted First-time Claims level rose during the third week of December, as is normal. The NSA FTU rose to to 284,799. This is slightly higher than last year's third week of December level, and was expected because we have 2.2 million more covered insured this December compared to last December.

The Non-Seasonally Adjusted Continuing Claims rose to 1,794,259. This was expected. This, too, is slightly higher than what was reported during the second week of December last year. Again, this is expected with 2.2 million more covered insured this year compared to the same week last year.

There are a couple of things to remember. First-time claims and Continuing Claims generally rise through the first week of January. Call it the "Scrooge Effect." We have 2.2 million more covered insured this year compared to last year. Any increase in claims could be due to the sheer size of the economy.  The First-time Unemployment Rate (FUR) and the Insured Unemployment Rate (IUR) are comparable to the same week of December 2017 and only slightly higher than the comparable week of December of 2018. One week is not a trend. Compare data from a similar date from a prior year, Compare December 21st data with December 21st data.  The streaks continue.