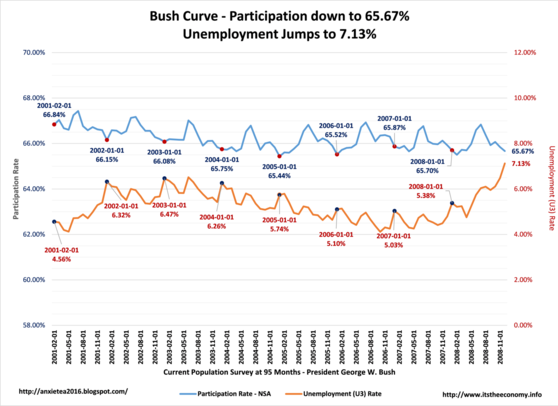 The December Employment Situation Report, or Jobs Report, was released Friday January 6, 2017 with little fanfare. Some in the media are calling this a "Goldilocks Report," not too hot, not too cold, just right. Some people are calling this a cold porridge report. This author called it a "Deceptive December Jobs Report." We saw full-time jobs, non-seasonally adjusted (NSA)  drop by 390,000 jobs and an additional loss of 197,000 part-time jobs.We also recorded a jump of over 100,000 unemployed workers, non-seasonally adjusted or seasonally adjusted (SA.)This data comes from the Current Population Survey. Unfortunately, the media focuses on the Current Employment Statistics (CES) data that measures workers added to, or subtracted from,  the economy. The CES data can count workers who work two or more jobs twice.The CES worker data recorded a NSA worker loss that was seasonally adjusted into a private sector worker gain of 144,000 workers. If they had used the seasonal factor used during December of 2015 the number would have been reported at 34,000 SA private Sector workers added.In addition to this news, the NSA CPS data revealed a drop in the participation rate and a bump up in the unemployment rate.This happened because we saw a drop in the number of people working multiple jobs. (This will be dealt with in tomorrow's Multiple Job Worker Column.) People who lose one of their jobs do not qualify for unemployment benefits because they are still employed.

The "Four President's" series was created when some person was promoting that President Obama and Democrats were better at creating jobs than President's George H.W. Bush and George W. Bush. They forgot about President Reagan. They were also comparing President Obama's job creation with more than a year left in his Presidency with President's who have finished their time in office. Jobs tend to decline during the final six months in office, especially during January. President Obama was in fourth place for job creation at month 81.

How does President Obama compare to Presidents Reagan Clinton and George W Bush after 95 months in office with regard to full-time jobs and part-time jobs created, as well as number of participants added to the economy and the unemployment rate and participation rate? Participation matters, as will be explained later in this column.

President Reagan Added 17.9 Million Jobs for 16.3 Million Workers.  Adding more jobs than workers is a good thing. People who were not working prior to President Reagan coming into office were earning money. The peaks that you see in the Reagan Job Population Graph are the seasonal spikes during the Summer Months. You will notice that the number of Full-time jobs dropped during the period of time from the Summer of 1988 through December. Even though these seasonal jobs disappeared  President Reagan had averaged 188,000 jobs per month while  adding 172,000 workers a month.

President Bush added 7 Million Jobs for 21 Million workers. President Bush's job creation peaked during the Summer of 2007. It almost returned to the same level during the Summer of 2008. Hurricane Ike hit that Fall. The Housing recession picked up steam. We were in a recession. President Bush had only added 75,000 jobs for 233,000 workers a month. People were still participating in the economy - they were participating as unemployed workers. More will be discussed on this topic  in this column.

Is the Real Unemployment Rate Closer to  10% or 12%. We have a record level of people working full-time jobs and part-time jobs for the month of December. We are just slightly above the full-time employment level m recorded during the Summer of 2007. This was the peak Pre-recession month for combined full-time and part-time jobs. We shed full-time jobs and added part-time jobs, creating a Part-time Iceberg. The problem is that the participation rate is at a December level not seen under Presidents Reagan, Clinton, or Bush, President Reagan's lowest participation rate was 63.04%. President Bush's Lowest was 65.44%. President Clinton's was 65.65% Could President Obama leave with his lowest level of participation ever this January? Remember that the Jobs report collects data through the 12th of January,, so the next jobs report is all President Obama.

If we had the same participation rates as Presidents Bush, Reagan, or Clinton we would have 8.3 million to 11.6 Million more participants. If we have these non-participants, and if people are working later in life this December as they were during November, then those non-participants are effectively unemployed. Not from the tables below that we would have 3 million more unemployed workers under President Obama with President Clinton's participation rate and that the effective unemployment rate would actually be lower than President Reagan. Unemployed people are participating.  Any way you calculate it the effective unemployment rate would be over  9.75% and possibly 12% 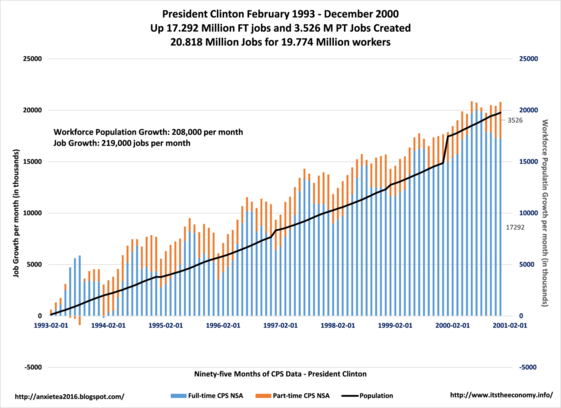 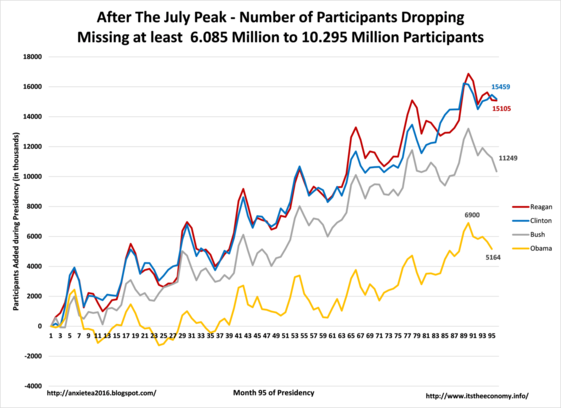 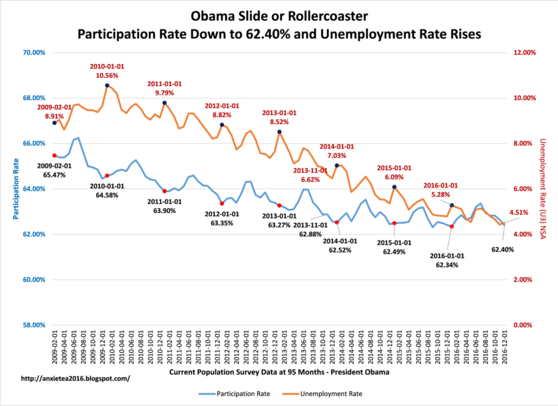 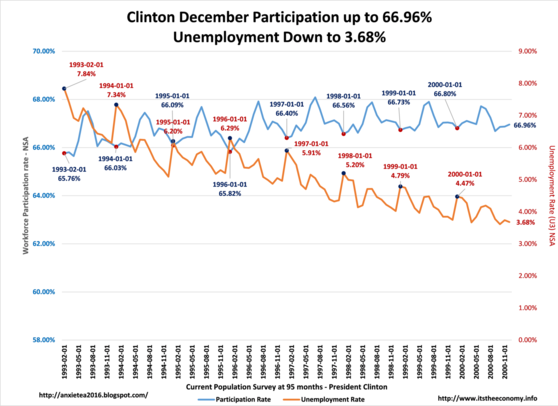 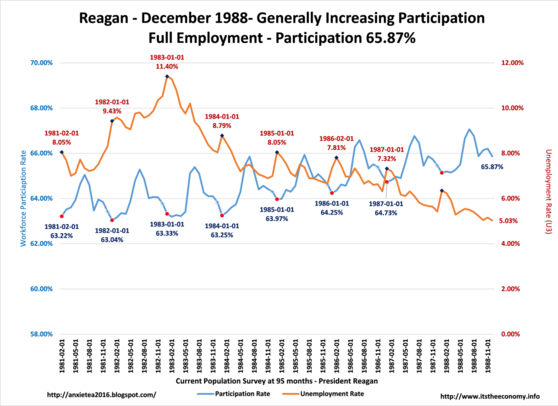 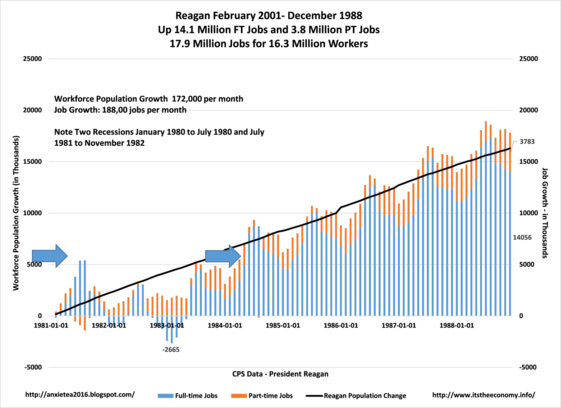 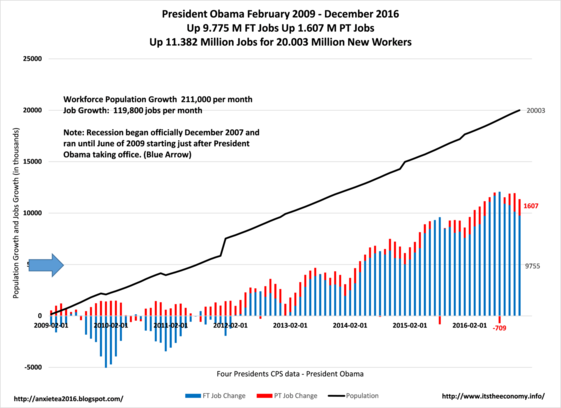 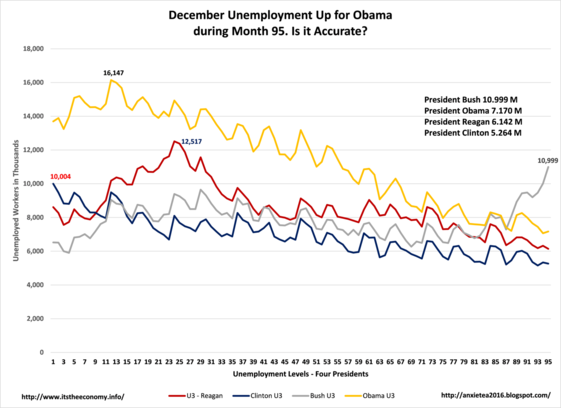 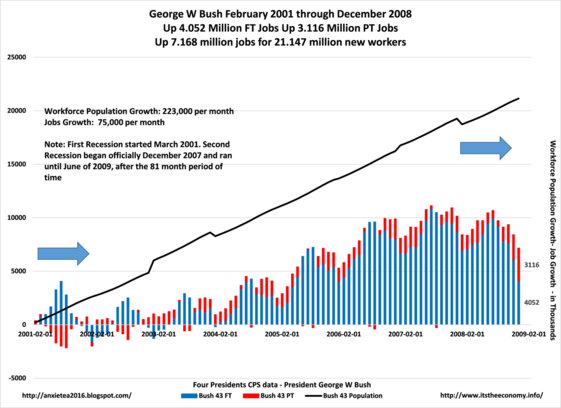