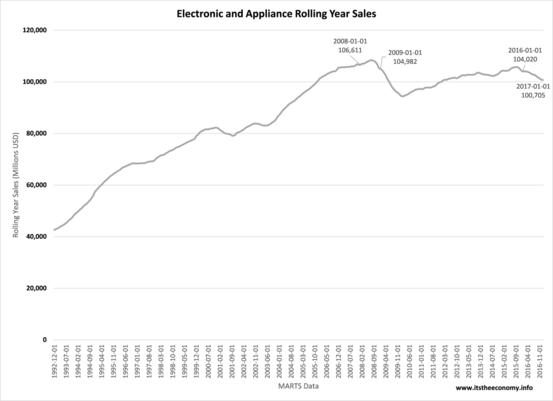 January Sales dropped Significantly from the Christmas Sales Levels of December - This is Normal. Automobile sales were down over December and up over last January. Automobile sales are truly driving the market. Building Materials, Health and Personal Care, Clothing, Non-store retail, and food and drinking places, as well as food and Beverage Stores all followed a similar pattern. What is a bit concerning is that Furniture sales were down from December 2016 and January 2016. The same can be said regarding the Electronics and Appliances, Sporting Goods and Hobby, and General Merchandise sectors.

Home Furniture and Furnishing Sales are still in recovery mode.  There is a six billion dollar deficit in January sales as compared to January of 2008. This plunge in furniture sales roughly coincides wit the downturn in the housing market. New homes "need" new furniture.

Electronics and Appliance sales are fading. Quite often the headline news is how well the electronics and appliance sectors are doing. They are referencing seasonally adjusted data. The headlines in this column have often referenced weak electronic and appliance sales. Peak January sales happened during January of 2008. January of 2009 was still a good month - the recession had not fully taken hold.  We saw over 106 billion in appliance sales during 2008, 105 billion during 2009, $104 billion during 20016 and just over $100 billion dollars in sales during January 2017.

Building Good and Landscaping (BMGE) Sales are Stronger now than prior to the recession. If you look at the overview graph you will find that the Home Furnishing and Furniture sector and the Electronics and Appliance Sector data are caught in the noise at the bottom of the graph. You will also notice that the BMGE sector took a hit during the recession.  We hit a rolling year high last January - we are $20 billion dollars higher now than we were last year.

Revisions across the board - November Down, December Up. we saw the November retail sales revised down by 199 billion dollars and the December sales revised up by 566 billion dollars. Notice that the Appliance, Food and Beverage Stores, and Food and Beverage Places data were all revised down for the month of  November and December. The Furniture Sector saw a downward revision for December. There is talk of a restaurant recession that is bantered about the media from time to time. These four sectors four sectors give use some idea of what people are doing with their disposable income.

This was a generally good retail sales report. It was not as good as is being reported elsewhere, in some ways, and considerably better than is being reported in other ways. The question is what impact will rising prices at the pump will have at restaurants and grocery stores? Not all sectors have recovered to pre-recession levels. The 4% growth over last January was sizable - the best annual growth rate during the past 13 months. Can we keep that pace going? More spending means more workers needed in retail locations. More workers - more jobs - more money to spend. That, or non-store retailers will continue to see monster increases and we will need more people in delivery and order fulfillment. 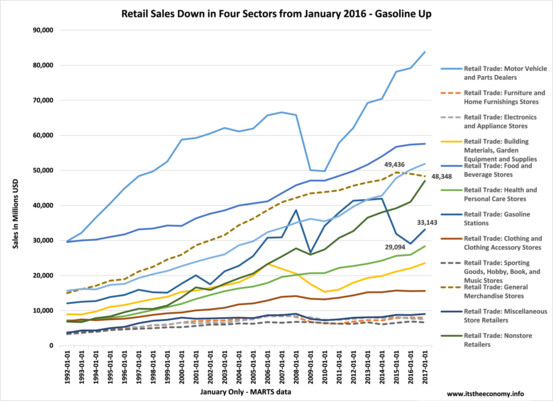 There was a little chatter yesterday regarding the January Retail Sales (MARTS) Report. The consensus was that it was a Goldilocks report - not too hot, not too cold.The release of the MARTS data coincided with the release of the consumer price index (CPI) report. Yesterday, this column published an article of the CPI report titled "January Inflation Spikes, Shelter, Medicine, Energy." One of the interesting bits of information that was lost yesterday was that there was another January decline in prices. This is the third annual decrease in Furniture and Furnishings price during the month of January. There were January declines during 2015, 2016 and 2017. Another thing to keep in mind is that the media was proposing that low gasoline prices during the past two years were acting as a "stimulant" to the rest of the retail market, forgetting that while we were experiencing lower prices at the pump we were paying higher taxes to Uncle Sam.

The Authors are claiming that sales are up from last month by 0.2% and 5.6% from last January. Another Government FACT (False Assertion Considered to be True.) The sales last month may have increased from December when examining the seasonally adjusted data. The reality is that retail sales fell across every category from December, non-seasonally adjusted. MarketWatch reported "Sizzling Sales."Reuters reported higher than expected retail sales and inflation.  What we know is that Gasoline expenditures rose by $4 billion over last January. We also know that retail sales fell in home furnishings and furniture, Sporting Goods and Hobby, General Merchandise Sales, and electronic and appliance sales. 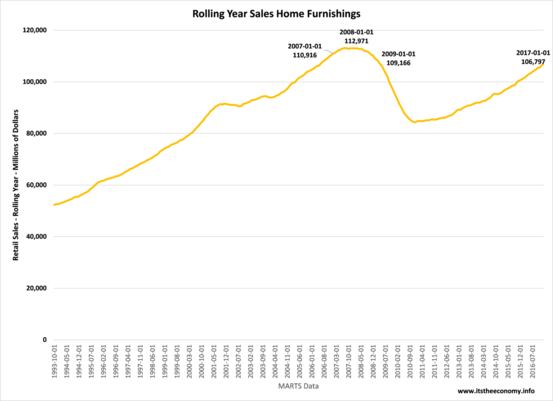 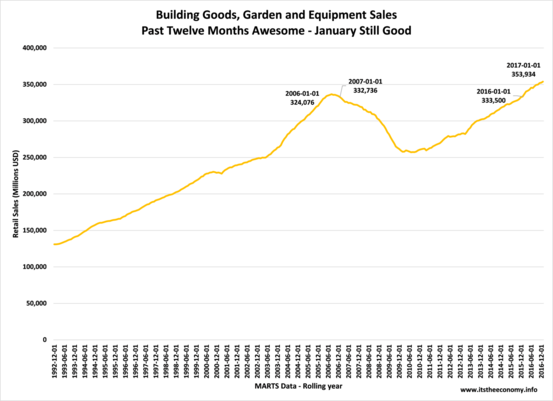