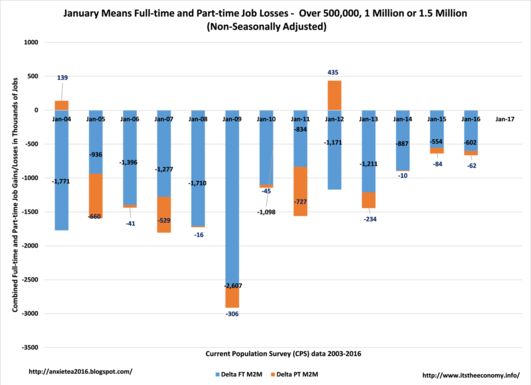 January is a Job and Worker Loss Month

Every year the story is the same: People Hire people in the Summer and let them go during the Fall. People Hire people for pre-Christmas work and let them go around Christmas.Elsewhere you will read that this is President Trump's first jobs report. The problem is that the jobs report data collection period ended on the 12th of January. President Obama's term in office ended January 20th.

We also have to remember that there is a difference between the Current Population Survey (CPS) data is used to calculate the unemployment rate and participation rate. The CPS data measures jobs created and lost, part-time and full-time. We have been shedding full-time jobs since July. This is normal. Seasonal full-time jobs are either converted into part-time jobs or are cut.  The Current Employment Statistics (CES) data measures the number of workers in the workforce. The President's Job Streak is based on the seasonally adjusted (SA) CES Private Sector Worker number. The seasonal factors used to convert the non-seasonally adjusted (NSA) CPS and CES data to their SA counterparts change by data set, category, month, and year.  When the seasonal factors are manipulated FACTs (False Assertions Considered to be True.) THere have been a ton of FACTs generated in the past ____ reports.

January is almost always a Full-time and Part-time Job Loss Month. We have a "Jobs Streak" because the government lives, breathes, dies seasonally adjusted data. We also have a jobs streak because the streak is based on the CES Private Sector Worker numbers. The CPS data shows that we will lose at least 500,000 total jobs. We could lose 1 million total NSA CPS jobs. It is even possible, if we are in a jobs recession, that we could lose 1.5 million combined jobs.

The Seasonally Adjusted Jobs Number should be positive. We had net seasonally adjusted CPS job losses during 2009 and 2011. We barely broke even during 2013. This bit of information causes some commentators heartburn because they have to explain how we lost seasonally adjusted jobs while the "Jobs" streak was said to have continued.

Unemployment should spike - maybe even in Governmentland. Normally we see the NSA U3 Unemployment number jump by at least 700,000 people. We know that last month the number of people working two jobs fell and that those people were most likely ineligible for unemployment status/benefits because they probably still had one job. Unemployment levels should record an increase in numbers and report a decrease in numbers.

How Much will the Population Change this Month? Normally the population level increase 0.07% to 0.09% a month. January is a revision or reset month. If the population grows at a slower rate, or a negative rate, the workforce participation rate could avoid 62.0%. If it spikes as it has the past two Januaries then 62.0 could be within reach.

Full -time and Part-time jobs could drop by 1% each. There are too many moving parts to predict exactly what is going to happen with the participation rate. The net-net here is that Unemployment will spike and not as much as jobs will drop. Not everyone who loses a job is unemployed. 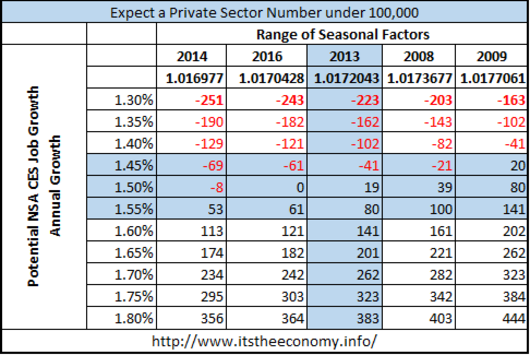 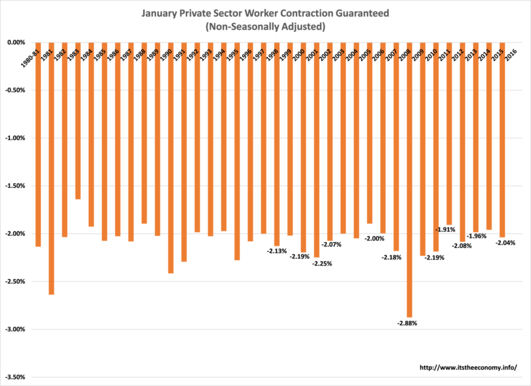 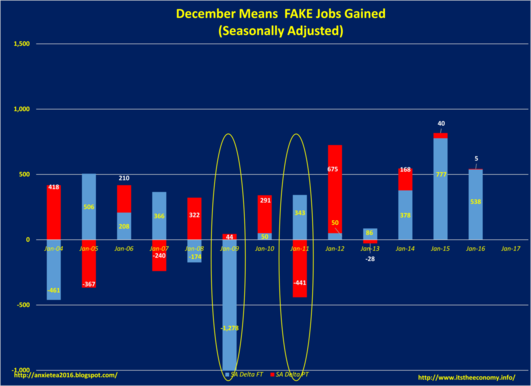 Will the Private Sector Worker Streak End This Month? (Again?)

Some people discuss the non-farm payroll number, which includes government jobs, and private sector payroll number, which does not include the government worker changes.What also needs to be recognized is that the "Jobs Streak" indicated growth. It was discussed in the December Jobs report that 2016 grew at a slower pace of worker addition than 2011 through 2015. This is apparent in the "Two Percent Tipping Point" graph. NSA Private Sector worker growth peaked during February of 2012 and February of 2015. Normally once the growth rate drops below 2.0% it continues until a jobs contraction happens.We are at an annual growth rate slightly slower than December of 2006 and slightly stronger than December 2000.  This provides a backdrop for the rest of the discussion in this section.

The Seasonal Factors are Relatively Random.The "Green" Private Sector table shows a range of seasonal factors used during the recession and recovery. If we contract as we did four years ago then we could see almost zero growth reported. a -2.08% contraction, using the seasonal factors from 2013 would yield a net gain of 9,000 workers. This is if we contract on a month to month basis as we have during prior January reporting periods. We are hearing stories of retailers closing stores across the country. We are hearing that manufacturers are planning on hiring more people. That gap between firings and hiring could produce a jobs/worker recession. If we have monthly contractions as we had the past two years we could see 67,000 to 135,000 seasonally adjusted private sector workers added as the reported number.

If we are in a job recession the Annual Private Sector Growth Rate will fall below 1.55%. The tables show that there can be an upward bounce during January or a drop. It isn't clearly one direction or the other. If we maintain the same rate, or s lightly better rate, than we had during December 2016 then we could have worker creation of 80,000 to 141,000.

What is the point of all of this work? I was a Realtor many years ago. If I managed expectations the buyers or sellers would be okay with a slow market or know that they had to act in a fast market. I am expecting some revision to prior data. If they revise the data down for last month that will make a larger bounce possible this month. A drop of the starting point of 25,000 would reduce the number of private sector workers from 144,000 to 119,000 or non-farm jobs from 156,000 to 131,000. The "streak" would be "maintained" and pad the numbers for this month. Say that the private sector number should have been reported at -10,000 jobs (-2.08 MTM contraction and 2016 seasonal factor) then the number would be reported at 15,000, maintaining the streak, or as high as 95,000 if they use the 2009 seasonal factor.

Expect a negative number if the authors of the report feel that this is President Trump's first jobs report. Expect another padded report if they think that it is President Obama's final report, which it is. Expect full-time job losses, possible part-time job losses, a spike in the unemployment number and unemployment rate, and a drop in the participation rate to a level not seen since January 1978. You can also expect another round of articles posted on this column regarding "Four Presidents at 96 months," "The Aging Workers," The Incomplete Recovery: ____ Sectors with fewer jobs than July 2007," "The War on Men: Fewer Men Working Full-time Jobs," and a column on the "Multiple Job Worker Worker."

This is the final full month of data for workers and unemployment measured under President Obama. Technically, there is another week of data that can be attributed to President Obama. Will President Trump pick his starting point for "job creation" at the lowest point of his Presidency to gin up the jobs number? No. As of last month, President Obama Had to lose 5 million jobs to add 16.4 million jobs for a net addition of 11.4 million jobs. We have been shedding full-time jobs since July of 2016.

Will we finish 2016 with fewer full-time jobs than we had during July 2007? How many Participants will have been added by President Obama? What is the Effective Unemployment Rate when factoring in participation? 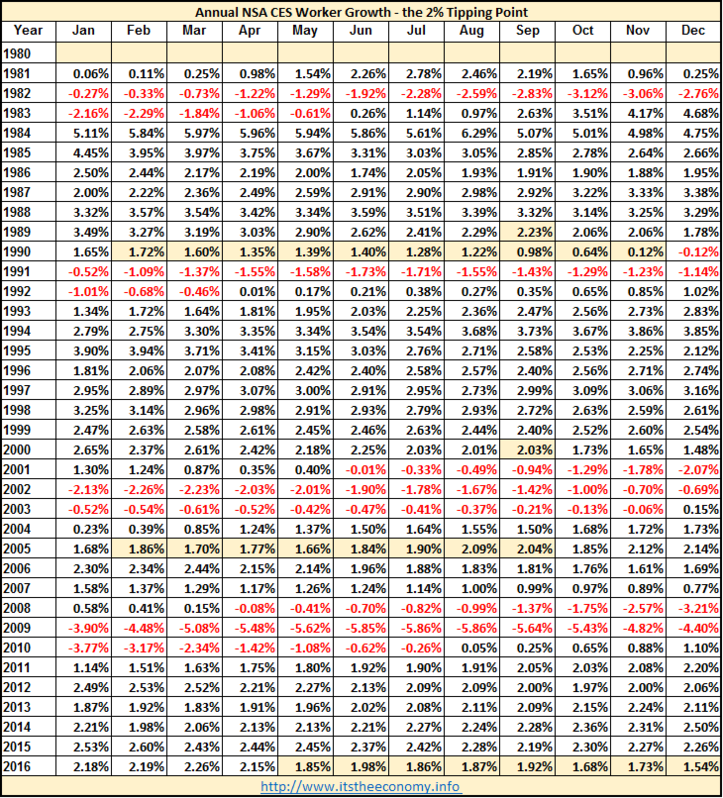 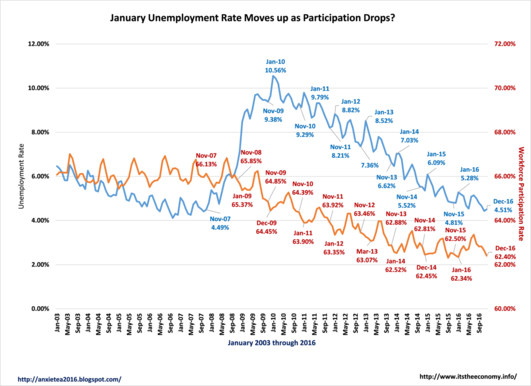 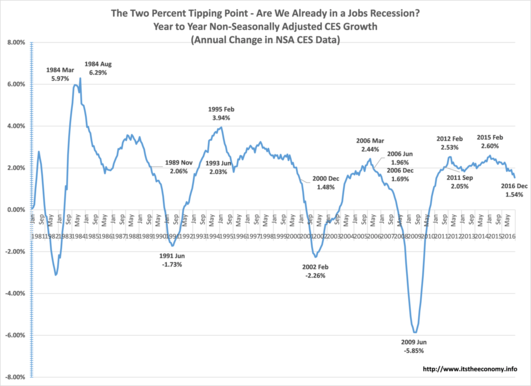 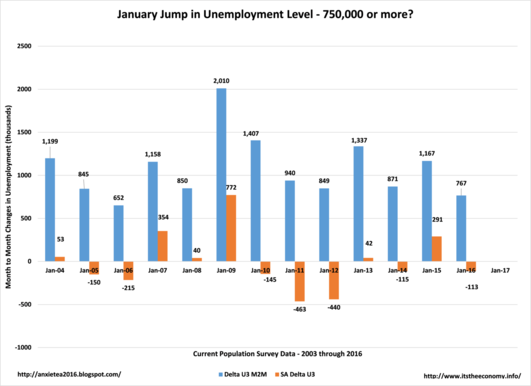 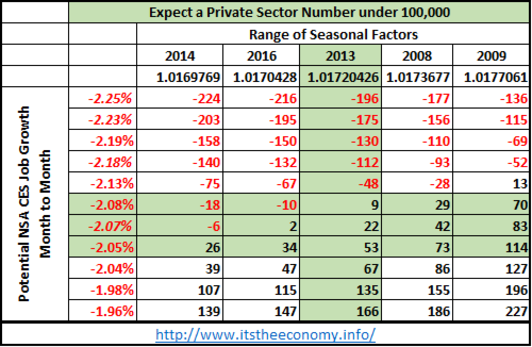