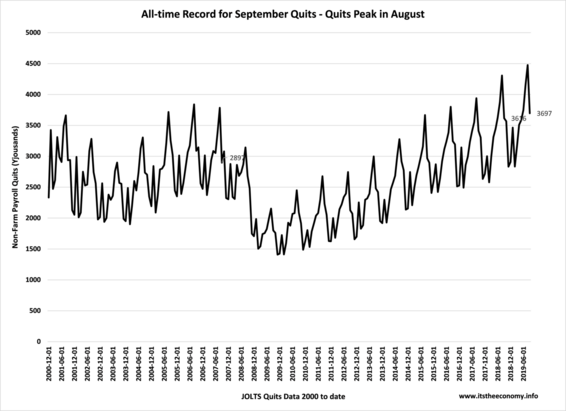 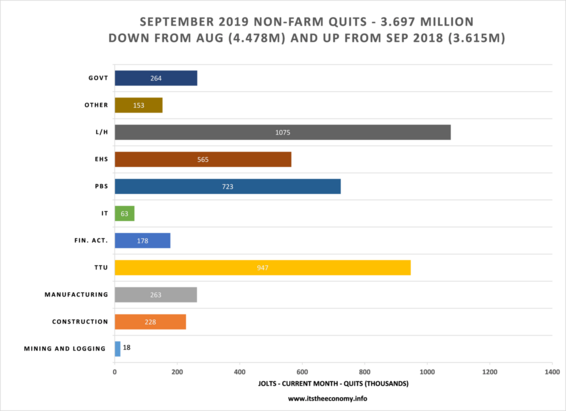 Last week we received the October Jobs Report. This week we received the September JOLTS Job Openings and Labor Turnover Survey Data. That's the way that it works. We have had elevated levels of Job Openings, Hires, Quits, and Total Separations for the same four sectors for a protracted period of time: Professional Business Services (PBS,) Leisure and Hospitality (LAH,) Education and Health Services (EHS,) and Trade, Transportation, and Utilities (TTU.) Three of those sectors are three of the four lowest paid sectors. What happened this September?

We set a September Record for Quits, Separations and Hires. Peak quit month is August. We set an all-time high last month. September drops off. That happened this year.

Job Openings dropped month to  month and September to September. Guess which four sectors had the most job openings.

We are not having record setting monthly "jobs data" because we are having record setting quits data. Even though the September data was revised higher with the release of the October jobs report we had 6.009 million hires and 6.172 million total separations. This is the problem with comparing JOLTS data with the CES worker data. It is also a problem to compare the JOLTS data with the CPS jobs data. September was a record September for FT jobs. Continuing claims were low during the middle of September. You might as well com. You may as well compare the studio temperatures in Seattle, WA, Syracuse, NY, San Francisco, CA and Sturgeon Bay, WI during the middle of September.

Record September Quits, Separations, and Hires indicate strength in the economy. People are willing to quit in order to find a better job. (The month to month graphics can be found here, The All-time graphs can be found here.)