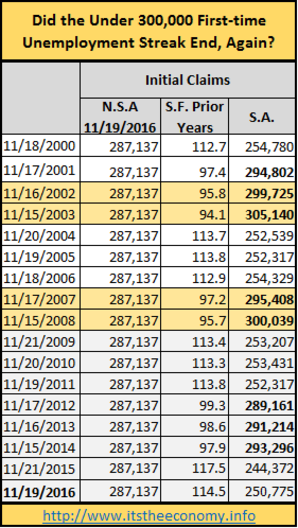 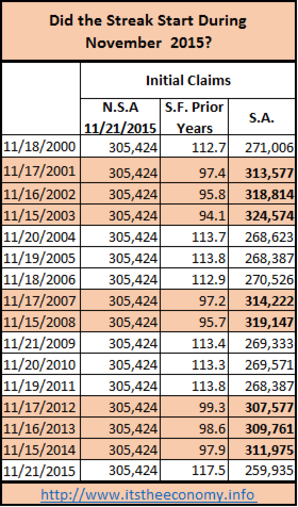 Seasonally Adjusted First-time Claims Level Should Have Been Reported

A Thursday Tradition on Wednesday. Every week of the year, the weekly unemployment claims report is released at 8:30 AM on Thursday morning, except when a major holiday falls on a Thursday. Yesterday was Thanksgiving so the report was released on Wednesday. The report included information on the first-time unemployment (FTU) claims level and the Continuing Claims (CC) level.

This week the report was a turkey. This week was no different. The data was seasoned and cooked and promoted as an awesome report.

The First-time Unemployment Claims Level Recorded a Jump of over 63,000 - Reported an increase of 18,000 Claims. This week the NSA FTU value was recorded at 287,137. Last week's value was revised down from 225,366 to 223,770, All of these numbers are and were sixteen year lows for the NSA FTU claims for their respective weeks of the month. The problem is that the numbers are being cooked differently than they have been cooked during previous years. Think of it as deep frying versus baking for hours.

Last Year's Numbers were Cooked. Last year there were 305,424 NSA FTU claims recorded. That number was seasonally adjusted to 259,935 - or 260,000 SA FTU. This was thought to be a good number back then. Last year this column reported that the authors of the report were in their own Fantasyland. They weren't even contemplating a "streak" narrative at the time. Had they used the seasonal factors from 2001-2003, 2007, 2008, or 2012-2014 the streak would have ended at that time.

This year's Recipe was Similar - and Just as Cooked. The range for this turkey could have gone from 244,000 to 305,000. This is like going from under-cooked to overcooked. Even using values from while President Obama has been the head chef the value could have been reported between 289,000 and 293,000. The propensity for using seasonal factors from other seasons and other years means that he could have used data from President Bush's era and reported it between 255,000 and 305,000. That is a huge variation in the recipe.

The Continuing Claims Number is Starting to Boil.  Once again, we have been simmering at sixteen year lows for the continuing claims number for months. We have either seen the best or second best level of continuing claims for months. The unemployment levels should start rising now that we are at Black Friday. Seasonal help will be released by the end of the year. Companies may be closing their books for the year and forever on New Year's Eve. We normally see over 2 million people lose jobs during the January Jobs report which covers the Scrooge Season of firings.  The spaghetti graph of continuing claims reveals that we could start eclipsing values for  2015, 2014, 2013, and 2005 during the upcoming weeks.

Jobs Report Friday Next Week. Next Friday we will see the release of the November Jobs Report. This column produces many articles regarding the jobs report, including a forecast column and a series of analysis columns. This column will identify trends in full-time employment, part-time employment and unemployment. This column has produced many articles on comparing the data for the four most recent Presidents who have served two terms in office. The "Four Presidents" series compares job creation between the four Presidents and well as the participation rates.

Last month it was found that we had an effective unemployment rate of between 9.74% and 12.01%. The reason the unemployment claims levels are so low, on a weekly basis and a monthly basis, is because people are not participating in the recover. They are neither employed nor collecting benefits. They are discouraged non-workers. It was also found that we had an October record level of people working two jobs and a near record level of October workers working two part-time jobs. When they lose one of their two or more jobs they will not qualify for unemployment benefits because they still have one or more jobs.  We may not see a spike in the NSA FTU or NSA CC levels for months.

Enjoy the rest of the weekend. Another Turkey may be coming out of the oven next Friday, and coal may be in the stocking next month. 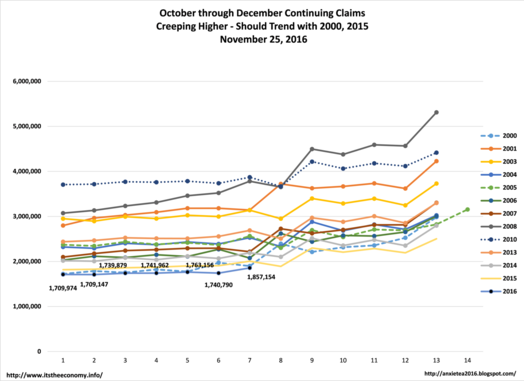 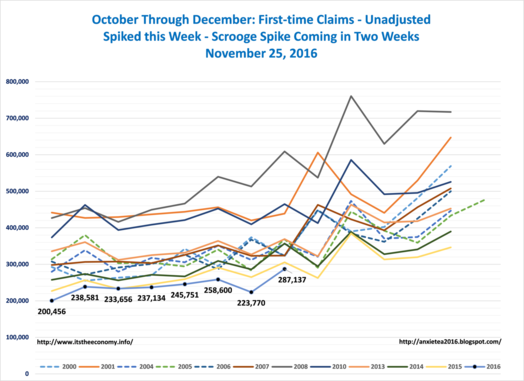