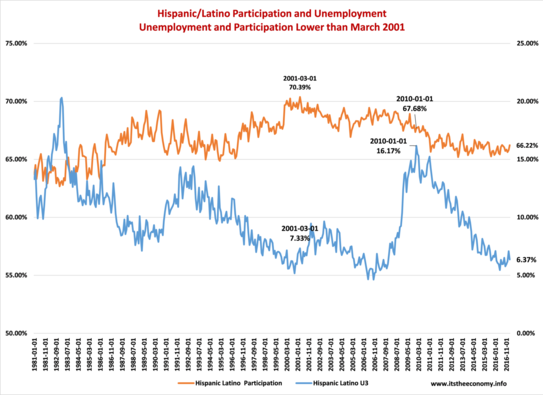 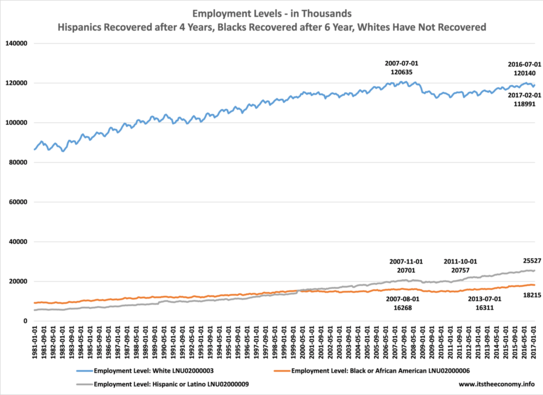 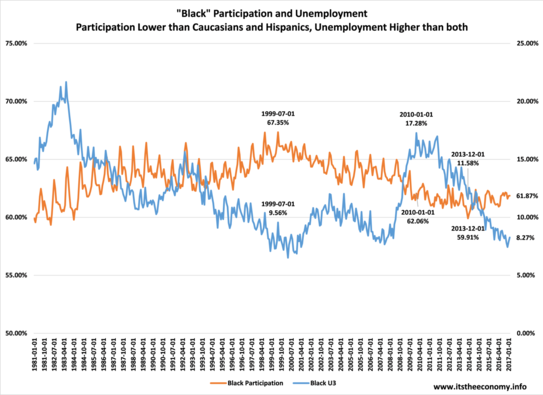 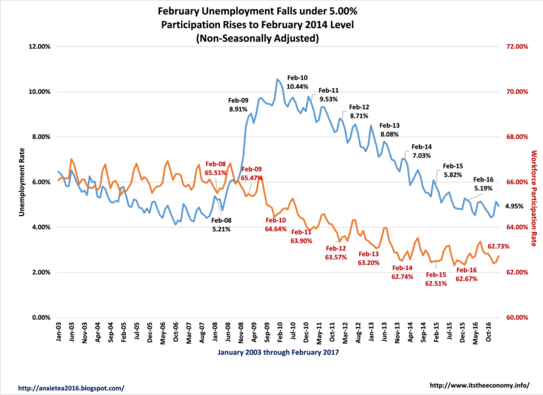 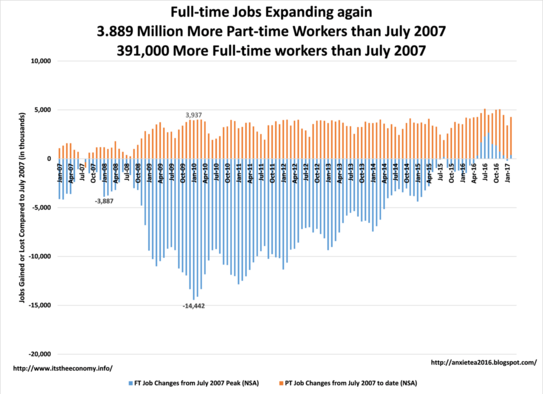 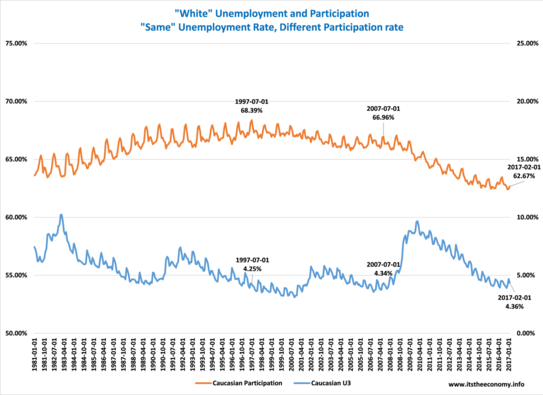 This past month we had a huge jobs report that went under-reported as a result of skewed seasonal factors. The data was pretty much digested and ignored within the first day of its release. This column published the jobs report assessment column "Remarkable February Jobs Report" that revealed the strongest month to month growth rate  since 2013 and a growth rate stronger than all other Februaries between 2000 and 2016. We have had an uneven recovery, with men still struggling to recover the full-time jobs lost since July 2007. The recovery has also been incomplete with regard to specific sectors in the jobs market. There are 13 sectors that are discussed in the Jobs Report.  Even though 12 of the 13 sectors added jobs during February, there were six sectors with fewer jobs than they had prior to the recession. There are numerous other ways to examine the jobs data. How are people of various age groups doing? How many people are working multiple jobs?

This column is going to address  a touchy subject. There was an interview on the "Tucker Carlson Show" with the Founder of "Fight for 15," a group pushing for a minimum wage of $15 an hour. He rattles off these statistics:

The author brought up these statistics with regard to wages earned by "black, brown, and white workers."  This column has published one column regarding the jobs situation for Black, or African American, workers, titled "Black Jobs Matter." It seemed like a good idea to write a column "Brown Jobs Matter" after watching the aforementioned interview. The data was interesting for a number of reasons. Just as this column examines the participation and unemployment rates, as well as jobs created and the true number of unemployed workers, as a whole,  it can break down the data, for the most part, by race. This column will examine the recovery, or lack thereof, of black workers, brown workers, and white workers.

The data is not available for "Black" and "Latino/Hispanic" workers working part-time and full-time jobs. The Current populations Survey identifies a number of racial groups, including "Black or African American," "White," and "All races - Latino, Hispanic, Non-Hispanic." This column has published a number of articles on the "Part-time Iceberg" as well as the "Male Iceberg" and "Female Iceberg." The full-time jobs lost during the recession is the bottom of the icebergs, plural, and the part-time jobs gained are the tops of the iceberg. This article cannot give a similar analysis of the full-time job and part-time jobs levels of Black and "Hispanic" workers because the Current Population Survey, CPS, data does not appear to exist.

Hispanic Participation Peaked during March of 2001 - at over 70%. There is so much data to compare that this could be a multi-part series. Notice that when unemployment peaked for Hispanics during January of 2010, at 16.17%, that unemployment for Blacks was at 17.38%. The Hispanic participation rate is now 66.22% with an unemployment rate of 6.37%

We would have 8 million to 11 million more participants, employed or unemployed, right now if we had the participation rates of July 1997 or July 2007. Participation is lower during the early part of the year and higher during Summer. Some of this is seasonal variation and the reason why the government records non-seasonally adjusted data and reports seasonally adjusted data.

Hispanic Recovered their Lost Jobs in under 4 years, Blacks took 6 years, Whites are still "waiting." This is an unequal recovery. Whites still work the lion's share of the jobs with 119 million jobs, Hispanics work 20.7 million jobs, and blacks work 16.3 Million jobs. There are 198 million White workers, 41 million Hispanic workers, and 32 million Black Workers. It was during the early months of 2000 when there were more Hispanic workers than Black works.   All three "races" lost jobs during the great recession. Hispanics exceeded their November 2007 level by October 2011. Blacks returned to their August 2007 level of employment by July 2013. Whites are working 1.7 million fewer jobs than they were working during July 2007.

This has been an unequal opportunity recovery. Could this be the reason why Hispanics and Black voted to stay the course? Could this be the reason, or one of the reasons, why Donald Trump is our President?   Fewer Men are working full-time jobs than were working full-time jobs during July 2007. Fewer whites are working now than during July 2007. What can we do? I am seriously promoting the data. I do not have a solution. As for the wage data, that will have to be another  article.