The December Jobs Report, or Employment Situation Report, received very little scrutiny this past week. We saw real, non-seasonally adjusted, full-time job loss, and real NSA part-time job loss during the month of December recorded by the Current Population Survey (CPS) data. We saw a real, NSA spike in the number of unemployed workers. We also saw a NSA decline in Current Employment Statistics (CES) private Sector workers. The column "Deceptive December Jobs Report" details how the 144,000 SA Private Sector workers who were reported to have been added to the economy during December of 2016 could have been reported as only 34,000 workers if the seasonal factor from December 2015 was used to convert the NSA CES data to the reported SA CES private Sector number.  The column "Four Presidents at 95 months  - Stealth Full-time Job Loss" detailed how President Obama is in third place for job creation at the 95 month compared to Presidents Ronald Reagan, Bill Clinton, and George W. Bush. It also detailed how the effective Unemployment rate, when factoring in the differences in participation rate between the four Presidents, could have been reported between  9.75% and 12.12%. We set a record level of people working two part-time jobs during the month of November. How are we doing right now?

Seasonally Adjusted FACTs. This month there was a major revision to all of the SA Total Multiple Jobholder data. These changes, when there were no underlying changes in the NSA data, creates a FACT, a False Assertion Considered to be True.The consecutive months with under 300,000 SA First-time Unemployment Claims streak is a FACT. The Consecutive Months creating Jobs under President Obama is a FACT. These seasonally adjusted MJH data are FACTs.

We had over 8 million people working NSA multiple jobs during October and November. That number dropped to 7.675 Million.We saw the number of people working two full-time jobs edge up from 270,000 to 282,000 during the month of December. When the people who are working more than one job lose a job, even if it is a full-time job, are less employed than they were the prior month. A drop in employment will place a crimp in the economy.

This column has raised the idea that we may be at the very beginning of a Jobs Recession. We have seen worker creation slow to a pace of 1.54%. This pace of growth is slower than we saw during December of 2006 when we were growing at 1.69% and slightly better than the 1.48% we saw during December of 2000. It is important to pay attention to the CES growth rate over the next few months. We may be one year away from the next official recession. We may have already started it.

The next few columns will address the sectors that have not recovered to pre-recession job levels, how men and women are doing in this economy, and how the various age groups are doing. 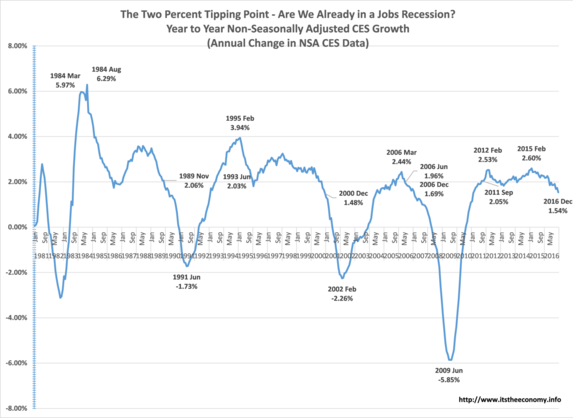 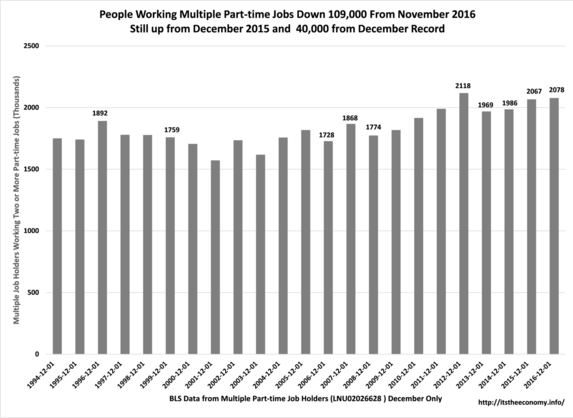 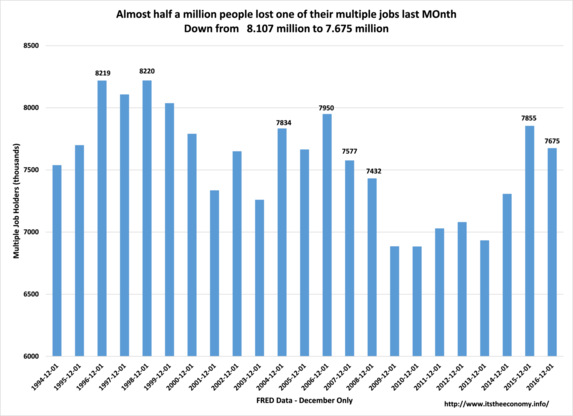 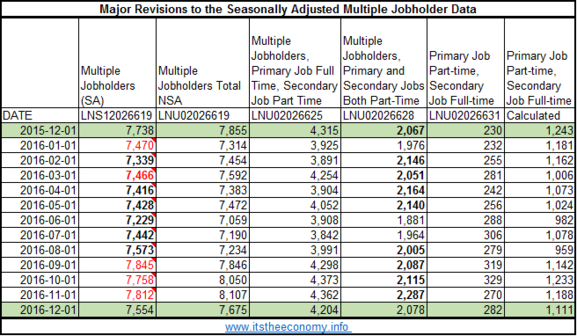