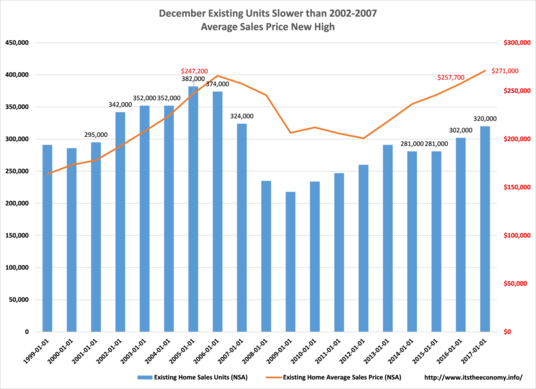 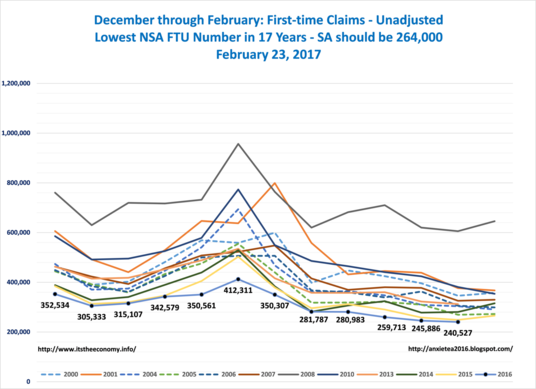 This week was a slow week for macroeconomic data. There were only three reports released which generated columns this week: The Existing Home Sales Report, The New home Sales Report, and the Weekly Unemployment Claims Report.

(Feb 22) You may have read or heard elsewhere that this was the best January for existing home sales during the past decade. The problem is that that is only part of the story. While we did set a record for the average sales price, and while we did sell more units than January 2008-2016, another story is that we still sold fewer units than were sold during  January 2002-2007. We also have a lower existing home inventory level than we had during December 1999. "January Existing Home Sales Solid, Disconcerting" explains that we cannot sell existing homes if there are "no" homes to sell. A lack of supply may cause existing home sale price to soar or shift people to the new home market to satisfy buyer demand.

(Feb 23) The Weekly unemployment claims report was released. Major news organizations, if they covered the release, were mislead into believing that the report was a good report and the best that we have seen since 1973. It was the best data recorded during this week of the year since 2000. The problem is that fewer people qualify for unemployment benefits. The authors of the report also skewed the seasonally adjusted first-time unemployment claims lower tan it should have been reported. "Weekly Unemployment Claims Mislead, Again" discusses the seasonal factors and the revisions to the weekly data.

(Feb 24) The new home sales data was released this past Friday. The data came in weaker than expected for some prognosticators. We have had weak new home construction data. Low starts means low completions which means low sales. "January New Home Sales Underwhelm" details how the current pace of sale for January was better than we have seen during 2009-2016 that it was worse than almost every year between1983-2008. One month does not determine the course of the year. The problem is that we are starting at a lower annual pace of sales than we saw during January 1984 or January 1993. It does not look like we will hit the 600,000 level that the prognosticators are expecting.

This month is a short month. Next week we will NOT see the jobs report released on the first Friday of the month.The February Jobs Report will not be released until February 10. This writer is anticipating that now that we are receiving the first data released for jobs created since President Trump took office  that the seasonal factors used to convert the data from non-seasonally adjusted to seasonally adjusted data will be skewed against President Trump. This column will produce a forecast columns plus the usual series of post-Jobs report columns. 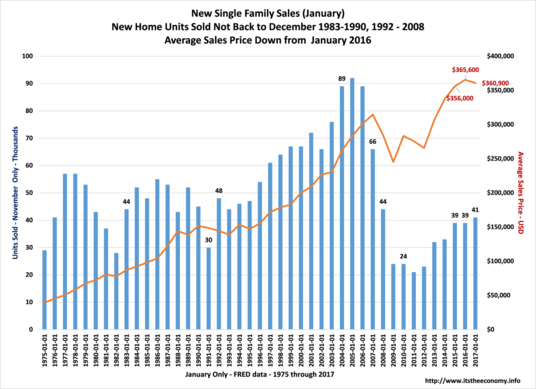