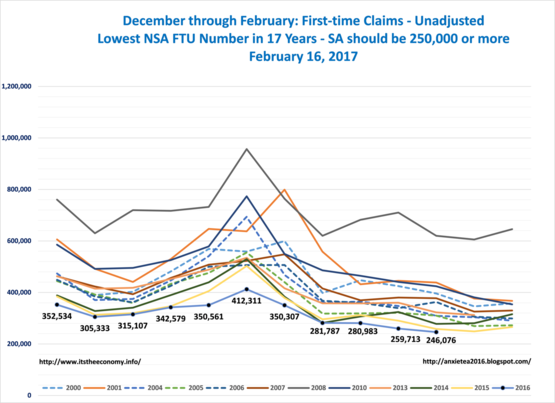 The weekly Unemployment Claims report garners very little attention elsewhere. Every week the Labor Department records non-seasonally adjusted (NSA) data regarding first-time unemployment (FTU) claims and continuing (CC) unemployment claims. The press reports the seasonally adjusted (SA) FTU number as gospel and occasionally mentions the SA CC number as a side note. The seasonal factors used to convert the NSA data to the SA data change by class of information, week, month, season, and year. When the seasonal factors are skewed or when seasonal data from different seasons, years, or decades are compared FACTs (False Assertions Considered to be True) are created. The weekly unemployment claims report was pushing a FACT regarding consecutive weeks of under 300,000 seasonally adjusted FTU claims. It didn't start when they said it did, it ended multiple times during the streak, and it ended this past November, again. They were pushing a FACT of the lowest SA FTU number since 1973 last week. Last week's data could have been reported between 222,000 and 242,000 claims.This is good - for the wrong reasons: Low participation, high levels of part-time workers, and near record levels of people working two jobs.

What happened this week?

Watch the revisions. Watch the seasonal factors. Unemployment claims are down from normal levels because we have a low workforce participation rate. The claims levels are low because we have near historic levels of people working multiple jobs. When they lose one job they still have another job so theat they are not unemployed. There is no lesser employed insurance. We are also seeing a large an=mount of seasonality in hiring. Seasonal employees do not qualify for unemployment benefits. 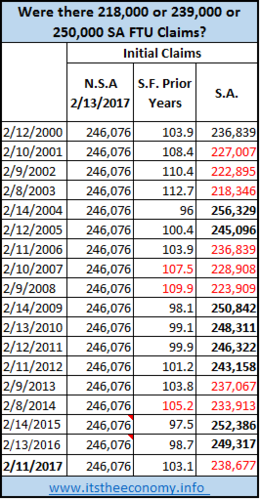