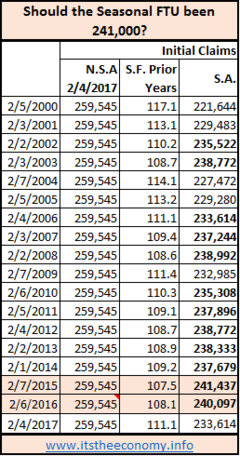 The Weekly Unemployment Claims report used to be a headline number most Thursday Mornings. Was it up? Was it Down? Was it under 300,000 for the Seasonally Adjusted (SA) first-time unemployment (FTU) claims? The Obama Administration went out of its way to promote FACTs (False Assertions Considered to be True) regarding the seasonally adjusted data. The problem was that it was using SA data from different seasons and different years. A second number received very little attention over the past eight years: The Continuing Claims (CC) number. If we have low levels of FTU claims we will have low levels of continuing claims. One of the reasons why we have had low levels of first-time claims is because we have had elevated levels of part-time employment. Another reason is that we have had elevated levels of multiple job workers. When a person loses one job, even a full-time job, and maintains a second or third job they do not receive unemployment benefits. They are still employed.

The January Jobs Report revealed a spike of 979,000 unemployed workers. It also revealed a drop in the workforce population of 660,000 workers. It is possible that if you add in the missing participants, those who are not employed and are not officially unemployed, that the U-7 unemployment rate is over 9.98% and could be as high as 12.62%. That same report had data that revealed that five sectors are not back to pre-recession job levels. The Mining/Logging, Construction, Information, Manufacturing and Government Sectors have fewer jobs than they had nine years ago.An even more daunting situation is that  "The Forgotten Male Worker" is working more part-time jobs and fewer full-time jobs than they were working during July 2007, the peak of the pre-recession market. Workforce Participation for men has dropped from 74.34% during July 2006 to 68.61% during January 2017. Officially the U-3 unemployment rate for men is 5.36% NSA. Unofficially, the U-7 Unemployment rate is 12.36%.

Last week the First-time Claims was Reported at 245,000 SA FTU claims. The problem is that with the seasonal factors (SF) used since 2000, for the fourth week of January, the SA FTU number could have been reported between 225,000 and 276,000. Another problem is that there was an upward creep in the continuing claims number.

What is the Truth about the Seasonally Adjusted First-time Claims Number? FACTs are False Assertions Considered to be True. The authors of the report are attempting to compare the data from February 4, 2017 with November 3, 1973. That is like comparing a grape to a craisin. The truth is that we are at a seventeen year low for the NSA FTU number for this time of year. It may take a lot more digging to find the real low for this time of year. The problem is that the participation rate is at a nearly 40 year low - unemployed people are participants. This is a fake headline.  If we had used the seasonal factor from 2015 or 2016 the SA FTU would have been reported at 241,000 claims.

The Continuing Claims Data remains Stuck just under 2.5 Million.  This is fairly normal during this time of year. Next week's data point will give us some idea where the unemployment level for the February Jobs Report will be.

The data this week was good - They were good for the wrong reasons.We have a failure to participate. Those who are participating are working part-time jobs or multiple jobs. If people lose a part-time job there are no benefits. If people lose one of many jobs, even if it is full-time, they are not eligible for unemployment benefits. If they do not qualify for first-time claims then there will not be the basis for continuing claims.  We are making good progress - we are in the wrong jungle. 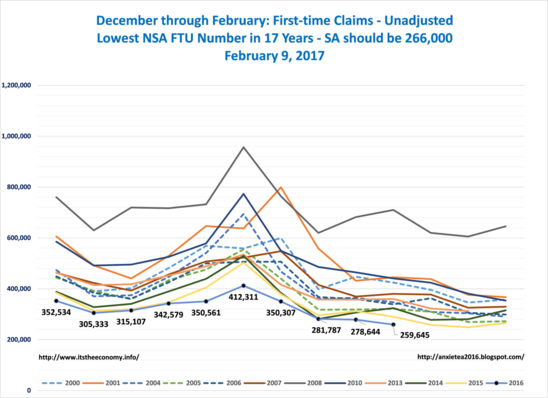 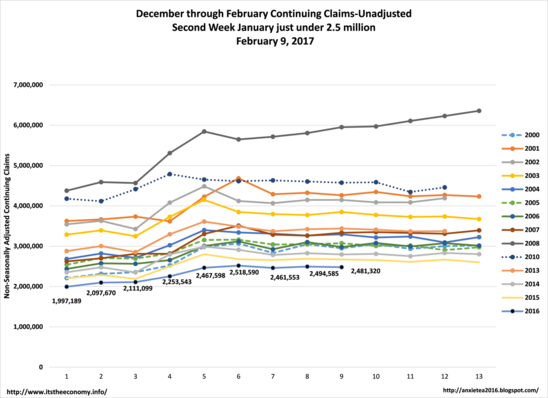