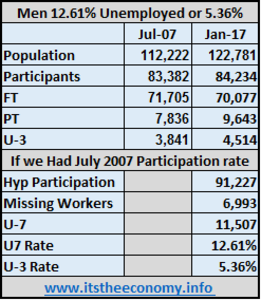 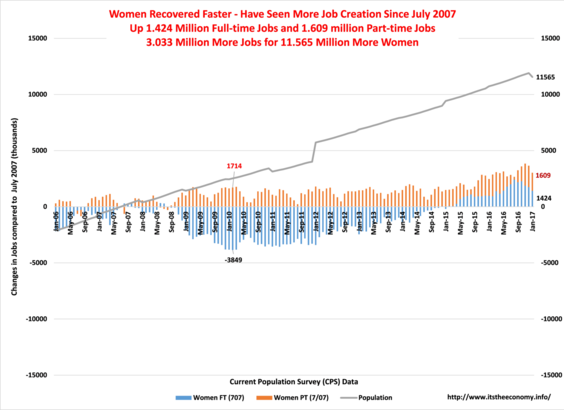 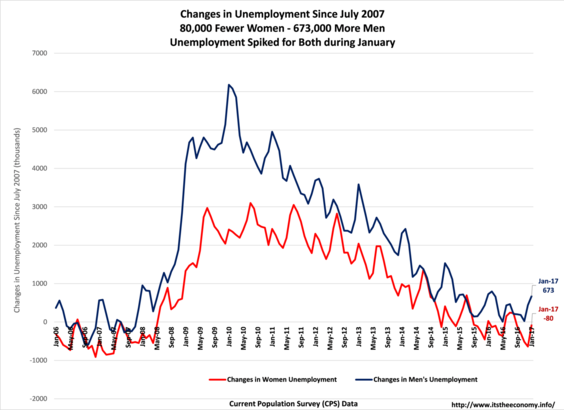 Where are all the male workers?

Last month this column published an article that revealed to the first-time reader that there has been a consistent  problem with multiple job sectors having fewer jobs than they had prior to the recession. Five Sectors had fewer Jobs than were present during December 2008.  Five Sectors are still in Recovery Mode during January 2017.

The Jobs Report forecast article, the "Four Presidents at __ Months" article, and the "Sectors Report" article are regular features on this website. Another regular article is the "War on (Wo)Men" series. There was supposedly a war on women during the 2012 and 2016 elections. What is interesting is that "nobody" is reporting on the "War on the Male Worker" The five sectors that are still in a recession or recovery are the Construction, Manufacturing, Mining and Logging, Information, and Government Sectors.  It could be argued that he first four sectors are "male dominated" sectors. What happened this month should be not much of a surprise. When jobs are lost and workers are shed men are going to lose jobs. Women, too.

Men have 1.6 million fewer Full-time Jobs than July 2007, July 2016. There were 71.705 million men working full-time jobs during July 2007. That number dropped to 61..084 million during January 2010. The number of men with full-time jobs hit 71.9 Million during July and August of 2016. That number has now declined  to 70.077 million. The good news is that some of these men have found part-time work.There are 1.807 million more men working part-time jobs than during July 2007. There are 9.643 million men working part-time jobs right now. This means that we have added fewer than 200,000 total jobs for men since July 2007. We have added over 10 million potential male workers since that time. Is there any question why the participation rate is down if we have added 10 million male workers and only added 179,000.

There are 80,000 fewer unemployed women and 673,000 more unemployed men that at the peak of the pre-recession economy. The Department of labor has six levels of unemployment.The unemployment rate does not factor in the changes in the participation. This month this column coined the term "U-7" to reflect the impact the participation rate has on the unemployment rate. Men had a peak participation rate right around 74.30 % during the Summers of 2006, 2007, and 2008. Women saw their peak during July 2009 with 59.89%. If we calculate the U-7 using the peak employment month of July 2007 we see that the u-7 is dramatically higher than the U-3 value.

We are forgetting that the economy has a face - it has millions of faces.Some of them are men. Some of them are women. The economy has added 10.5 million male workers since July 2007. We have lost almost one million male participants even with a surge of 1.8 million men working part-time jobs and having 700,000 more unemployed men than July 2007. They have been forgotten.  Male dominated work sectors have not recovered to pre-recession levels. This is being forgotten, too. 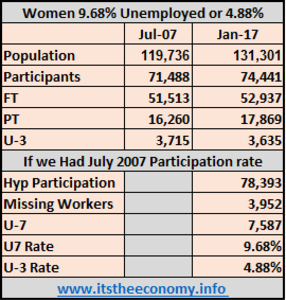 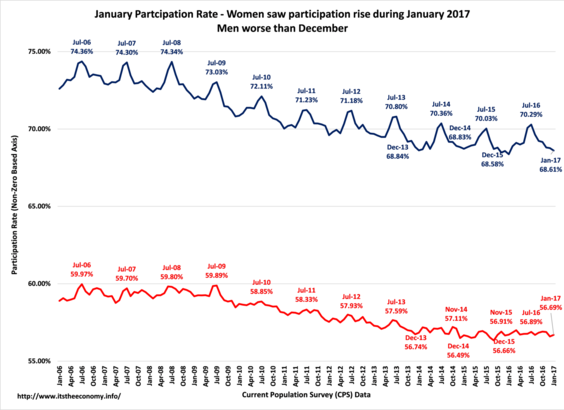 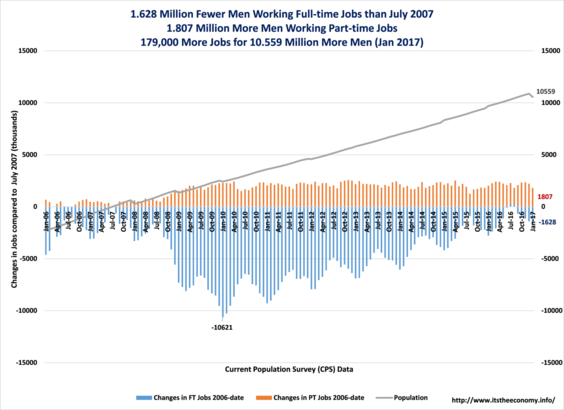