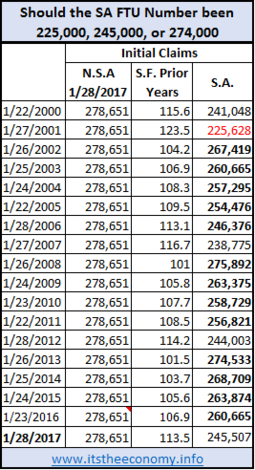 The Weekly Unemployment Claims Report used to be a mainstay of Thursday morning business news. Channels would take a commercial break at 8:29 am and return with the report in the palms of their hands. There are three numbers in each weekly unemployment claims: The First-time (FTU) Claims, The Continuing Claims (CC,) and the Covered Unemployed Percentage. Each has a seasonally adjusted (SA) and a non seasonally adjusted (NSA) component. Each has an advance value, a preliminary value, and a final value. The preliminary data released this week increased both for the first time and continuing claim number. They are no longer promoting the SA FTU streak for weeks under 300,000 claims. This column has produced numerous article debunking the streak. Maybe someone who writes the weekly report read those articles.

What happened this week?

First-time Claims Virtually Unchanged - Should have been reported higher. The NSA FTU claims number for last week was revised up from 280,463 to 281,787. This is actually a good number. This is the lowest value during this time of year since January of 2000.  We have seen the advance data for the NSA FTU revised upward with the preliminary data  for the past five weeks.These revisions have been minor. These revisions have been regular. Last year we saw times where the advance data for the FTU claims number were consistently revised downward from their advance values. This may be something interesting to monitor.

Should the First-time Claims Number have Been Reported Higher Than it Was? Yes. The seasonal factors have been massaged so much that the FACTs (False Assertions Considered to be True) can't keep up with the data. The authors of this report used to compare the current seasonally adjusted data with seasonally adjusted data from different seasons and different years. The was disingenuous. If the seasonal factors from last year were applied to this year's data then the SA FTU would have been reported at 261,000. If they used the factor from 2013 it would have reported a SA FTU of 274,000. Either of these numbers would have been seen as good. The problem is that we have weak participation and elevated levels of people working two jobs. People who aren't participating aren't even unemployed. We saw a drop from the levels of people working two part-time jobs recorded during December of  2015. This drop was not measured in the number of unemployed worker because they probably still had one job.

Continuing Claims are creeping higher week after week.  We have increased from 2.0 Million to 2.5 million since the first week of December. This, too, is a seventeen year low for this time of year.The problem here is that if people are not collecting first-time claims then they cannot collect continuing claims. Another problem is that there is no correlation between the weekly unemployment level and the official NSA Unemployment (U3) level. These are two different data sets measuring two different things. The weekly report measures claims - some unemployed workers do not qualify for claims benefits. The U3 number measures those who have lost jobs and who are looking for work - it doesn't matter if it was a full-time job or a part-time job. It doesn't matter if it was a permanent job or a seasonal job.

Tomorrow is President Obama's final Jobs Report. You will hear elsewhere that this is President Trump's first Jobs Report. The data collection for this report continued through January 12th. President Obama took office on the 20th of the month. One could even argue that part of next month's jobs report still reflects President Obama's term in office. This column has produced articles for over a year comparing the most recent two term Presidents at the same point in their Presidencies. Next week we will see the release of the "Four Presidents at 96 months" column. We should see unemployment pop. The January 14, 2017 value for the continuing claims level was 2.464 million up from the 2.097 Million from December 10, 2016. These are the two dates closest to the Jobs Report Survey collection date. We see real the NSA Current Employment Statistic (CES) Private Sector Worker level drop by 2% almost every January. Sometimes the level drops by more than 2%. This may be seasonally adjusted to a gain.

This column produced an article last week, "Jarring January Jobs Forecast," that detailed what the Private Sector growth rate could be and what the seasonal factors could be. I do not see how we added over 246,000 seasonally adjusted private sector workers to the payrolls as ADP reported yesterday. It all comes down to the revisions to the December data and the seasonal FACTors used to convert the NSA data to the SA data. Unemployment should rise. Participation should fall. Full-time jobs should drop by 500,000 to 1 million jobs. Part-time jobs may rise and should fall. 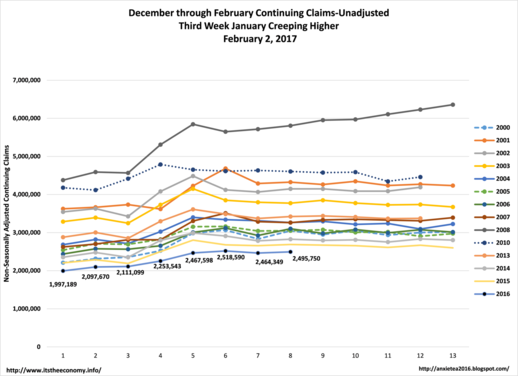 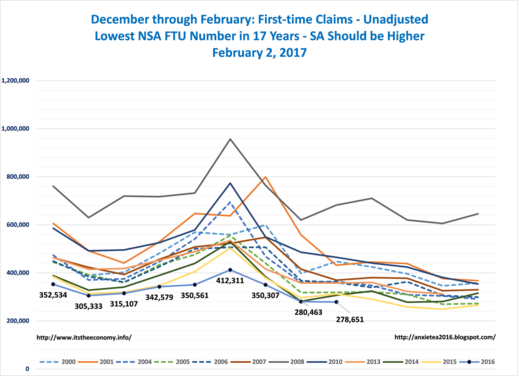