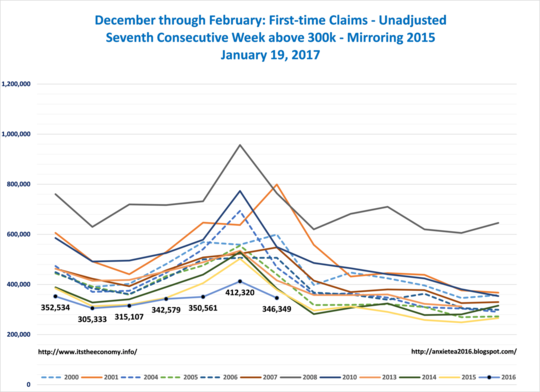 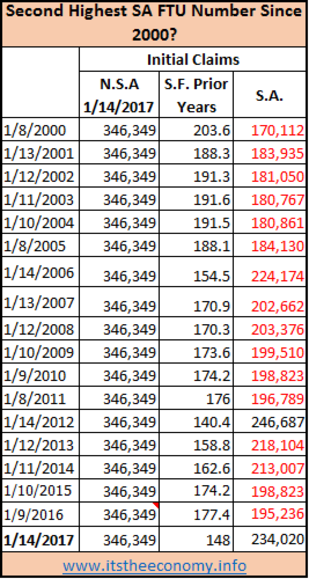 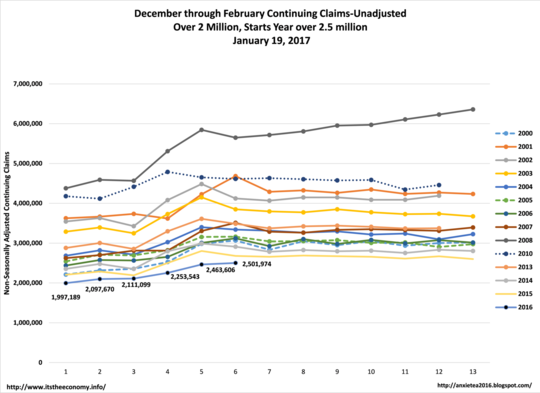 Thursday is the day that the Weekly Unemployment Claims Report is released. It used to me a mainstay of media coverage at 8:30 AM East Coast Time. The headline number that is reported  is the Seasonally Adjusted (SA) First-time Unemployment (FTU) claims number. There is also a SA Continuing Claims (CC) number. The data that is recorded are the Non-seasonally Adjusted )NSA) FTU and CC numbers. The seasonal factors used to convert the NSA data to the SA Data change from week to week, month to month, season to season, and year to year. The seasonal factors are published 4-8 months in advance. This is rare for government data - I have not run across this elsewhere. When the seasonal factors are skewed from expected, or prior, seasonal factors FACTs (False Assertions Considered to be True) are created.

Did the First-time Unemployment Streak End or did they just stop reporting it? The Department of Labor has been reporting a Consecutive Weeks Streak for the SA FTU number. This was the mother of all FACTs. It did not start when they said it did, March 2015. It ended multiple times including January of 2016 and November 2016. Last week they reported that streak at 97 consecutive weeks. This week the SA FTU number is supposedly 234,000 claims.Now they have stopped reporting it. They have also recently changed the sitefor the archive of data. Why? I don't know.

The Seasonal Factors through April 2017 have been posted. This column has called out the department of Labor for changing the published seasonal factors. I would have to dig into the archives to find that column.  The seasonal factors for the first four months of 2017 are posted here.

This is the Seventh Consecutive Week with Non-Seasonally Adjusted First-time Claims over 300,000.We live in reality, the non-seasonally adjusted world. The government sugar coats the data by seasonally adjusting it.We have been over 300,000 claims since Thanksgiving. We are still below where we have been since 2000 for the second week of January. It just is not as good as they are reporting. It is also important to note that last week's data for the NSA and SA FTU claims were upwardly revised. The NSA FTU number was revised up from 409,869 to 412,320. This means last week's SA FTU was 254,000.

Did we have the Second Highest Seasonally Adjusted First-time Claims Number since 2000?  The seasonal factors for the second week of January have been significantly higher than this week's seasonal factor during fifteen of the past sixteen years.Would anybody have believed the administration if they said we had 170,000 or 181,000 or even 195,000 SA FTU claims this past week?

Rising First-time Claims are increasing the Continuing Claims Level.  While the rest of the media is ignoring the weekly unemployment claims they are also ignoring the continuing claims number. The continuing claims number, as the first-time claims number, is at a sixteen year low. The same could be said about the workforce participation rate. We know that the effective unemployment rate is probably between 9.75% and 12,12% and not under 5%. This is the impact that a declining participation rate has had on the unemployment rate. people are not just "unemployed," there aren't participating. If they are not participating,and they are not employed, they aren't unemployed. Nice double negative. If we do not have people claiming unemployment claims, because they lost one of two or more jobs, as some people did during December, they are not unemployed, they are lesser employed. There is not a lesser employed insurance program.

President Obama's Final Unemployment Claims Report will be released next week. The closing date for this report is January 21, 2017. President Obama's Final Jobs Report will be released next month. The closing date for that data set is the 12th day of the month.If an employee was employed on the 12th of the month and not the 15th that person is counted as employed.  The first-time number can drop a little more next week. The continuing claims level may increase a little during the next two months. These are annual trends.

Will we see unemployment claims rise? Time will tell.It is time to start watching all the pots on the stove. The Jobs pot, the Unemployment pot, the retail sales pot, the housing pots, new home and existing homes, as well as the Consumer Price Index.