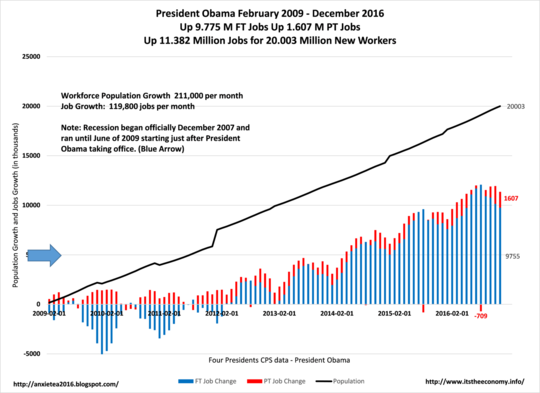 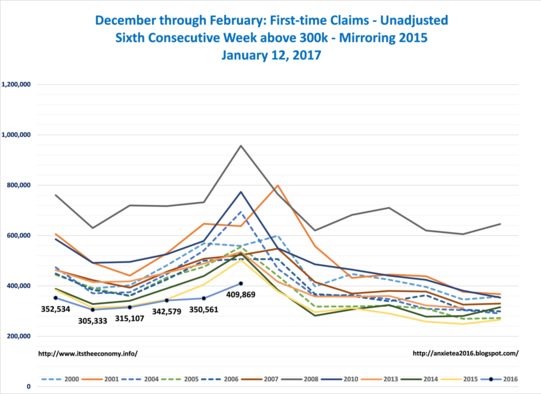 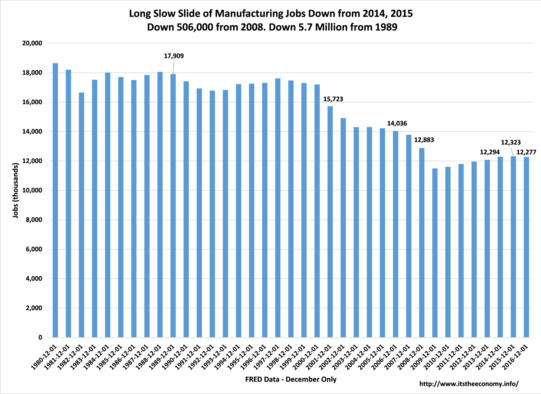 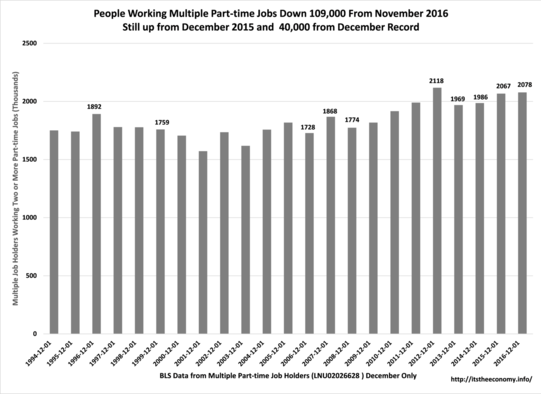 The Jobs Report Takes Time to Analyze - Maybe even a week.

The week following the release of the monthly Employment Situation Report, or Jobs Report, is often a slow week for data. This affords the opportunity to dig further into the numbers. There is more to examine than the Current Population Survey (CPS) Jobs Numbers and the Unemployment and Participation Rates. There is more to examine than the Current Employment Statistics (CES) Private Sector or Non-Farm Payroll Worker Numbers. There is the total number of jobs created by the President, the total number of unemployed workers, and the missing participants, There are the number of people working multiple jobs. There is a sector by sector analysis of the incomplete recovery. We can examine how man and women are performing in the recovery. We can even examine the jobs and unemployment situation by gender.

(Jan 9)  The week started with a comparison of the four more recent two term Presidents at the 95 month markduring their Presidencies. The data for the jobs report is collected by the 12th of the month, so President Obama has one more jobs report to add to his record. Readers of this column understand that the participation rate has an impact on the unemployment rate, and the other way around. Unemployed workers are participants. The Deceptive December Jobs Report revealed Non-Seasonally Adjusted (NSA) Full-time job loss,NSA Part-time Jobs Loss, an increase in the number of unemployed workers, and a decrease in the NSA CES Private Sector worker number.We saw a drop in participation. If the unemployment rate and participation rate at the 95 month mark for President Obama is compared with Presidents Reagan, Clinton, and Bush it is found that we are missing 8.3 million to 11.6 million participants and that the effective unemployment rate is between 9.75% and 12.12%.

(Jan 10) There are many untold stories through this recovery. One such story is the elevated levels of people working two jobs. We have seen all-time record highs of people working two part-time jobs.We have also seen a considerable number of people working a part-time and full-time job or two full-time jobs. The story behind the story here is that we saw people lose one of their multiple jobs. This means that they are still employed, just lesser employed. There is no "lesser employed" insurance."December Decline in Multiple Jobholders" goes into detail.

(Jan 11) A second untold story is that there are five sectors that have fewer jobs now than they had during December of 2008. It has to be remembered that the peak pre-recession employment month was July 2007. It is eight years after the recession began to pick up steam and we have five sectors with fewer jobs than they had eight years ago. Eight. Years. WE also saw declines in eight sectors from November 2016 to December 2016.

(Jan 11) There was a "war of women" rallying call during the 2012 election. What was ignored during that time was that men had lost more jobs than women during the Great Recession. The column "More Men Working Part-time, Unemployed than July 2007" details how women have recovered faster and better than men. It details how men are working 2.2 million more part-time jobs and 1.4 million fewer full-time jobs than they were during July 2007.

(Jan 12)  There is one report that "everybody" anticipated during the Great Recession. It was released every week. It is still released. It barely receives 15 seconds of fame a week. It is the weekly unemployment claims report. The authors of this report have created FACTs (False Assertions Considered to be True) for years. They compare seasonally adjusted claims data from one season with seasonally adjusted data from another season. The problem is that we have different seasonal factors every week, month, season and year.  One of the most distorted, contorted FACTs is that we have had over 90 consecutive weeks with fewer than 300,000 SA First-time Unemployment Claims. It is ironic that that streak ended, again, six weeks ago when we eclipsed 300,000 NSA First-time Unemployment Claims. It is ironic because we have had 6 consecutive weeks of NSA FTU Claims numbers over 300,000. Both NSA FTU claims and the continuing Claims number have been rising for weeks.

(Jan 13) The final analysis of the December Jobs Report was the column "Recovery Fading for those 40-54."  Some of the people in the media are blaming the declining participation rate under President Obama on the aging of the workforce. While there is an age shift ongoing in the workforce, those changes are not what you might think that they are.

The Jobs Report is more than just one or two numbers. It is more than the "worker" number. It is more than the participation rate or the unemployment rate. We have had an incomplete recovery. The effective unemployment rate is most certainly over 10%. There are five sectors with fewer jobs than we had during July 2007. Men are working fewer full-time jobs and more part-time jobs than July 2007. We have had record levels of people working multiple part-time jobs lose jobs and not have those losses recognized in the unemployment data because they still have one job. It takes time to separate the FACTs from reality.

We have one more month of Jobs Data for President Obama - He will add fewer participants than Presidents Reagan, Clinton, and Bush. Are we in a Jobs Recession? Probably. How bad is it? We will know by this Summer. 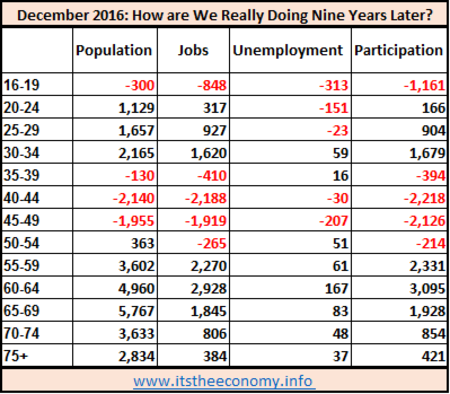