When Record March Levels of Job Creation are Not Enough

The monthly employment situation report for the month of March was released this past Friday. It received derision for being very weak. This is the problem with basing the "jobs" number on the seasonally adjusted Current Employment Statistics (CES) data that measures workers. The Current Population Survey (CPS) measures jobs.  The February Jobs Report revealed record combined level of non-seasonally adjusted (NSA) CPS jobs created when the full-time and part-time jobs are combined. The March report revealed a record level of Full-time jobs created for the month of March (at least since March 2003.) That same report had statistics regarding a drop in the NSA Unemployment Rate (U-3) and an increase in the participation rate. When the unemployment rate of 4.56% is nearly identical to the unemployment rate of March 2007. The participation rate of 62.86% this year does not compare well with the 65.89% participation rate of March 2007. If this is full-employment than March 2007 we had "over flow" employment and the employment during the Clinton years were fullest employment.

We Set a March Record of 8.137 Million People working Two Jobs. The data on multiple jobholders only dates back to 1994. We saw the March level of Multiple Jobholders exceed 8 million during March of 1999, right before the dotcom bust. Technically that happened right after the election of 2000. Are people working two jobs because they need to work to jobs or because they want to work two jobs. I worked as a full-time bartender and a nearly full-time jewelry sales person during the late 1980s. I was looking for a salaried gig back then. I had to work two jobs and I wanted to work two jobs.

We Set a Record for People Working Two Part-time jobs for the Month of March. We had not had two million people working two part-time of jobs during the month of March until last year. This March we surpassed that level. We had 2.144 million people working two part-time jobs last month. Are employers testing the waters, hiring part-time workers to convert to full-time workers? Are employers still behaving this way because of the full-time equivalent requirements of the Affordable Care Act?

We are seeing solid job creation, no matter that the seasonally adjusted CES data says. We have added over 2 million jobs during the past two months. We are seeing millions of people working two jobs. Unemployment is down, in part because people are working and in part because people are working multiple jobs. When these people lost jobs during January, and multiple jobholders did lose jobs, 270,000 jobs to be exact, they were unable to claim benefits because they still had one of their multiple jobs. Record total part-time job and full-time job creation for the month of February wasn't good enough. Total job creation, full-time and part-time, wasn't good enough for the Month of March. Increasing participation, non-seasonally adjusted, received barely a mention. Decreasing unemployment in real numbers and unemployment rate, ho-hum, we have had declining unemployment for years. We have the highest level of jobs ever, combined full-time and part-time, a nobody seems to notice. 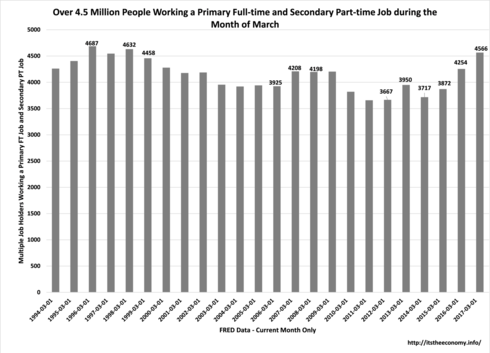 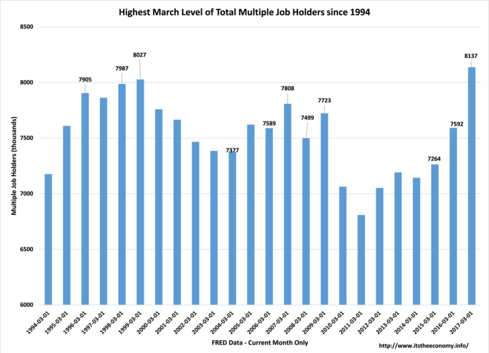 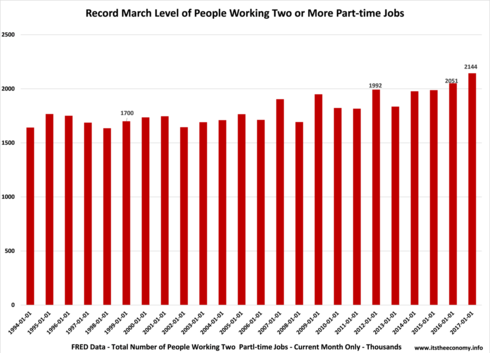