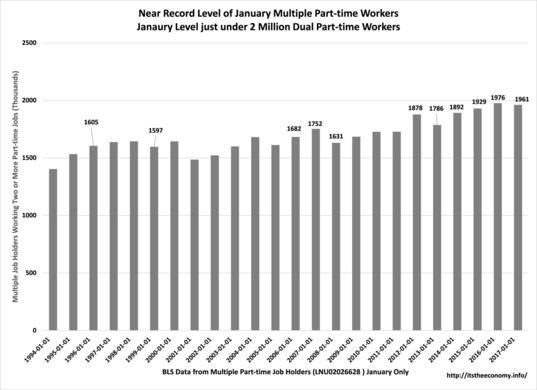 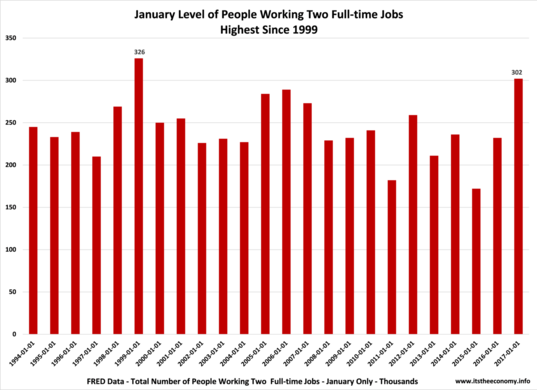 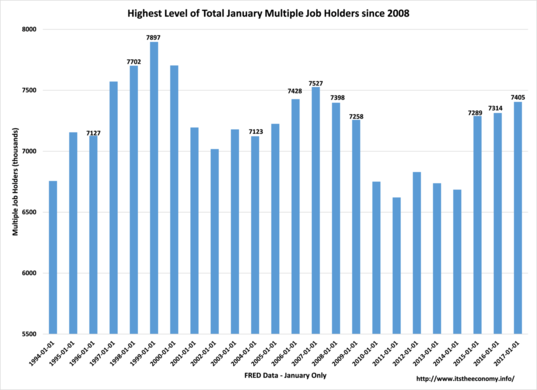 The January Jobs Report revealed a spike of 979,000 unemployed workers. It also revealed a drop in the workforce population of 660,000 workers and a drop in both the number of non-seasonally adjusted (NSA) Full-time Workers and a drop in NSA Part-time workers. People who are employed or unemployed are participants in the economy.  It is possible that if you add in the missing participants, those who are not employed and are not officially unemployed, that the U-7 unemployment rate is over 9.98% and could be as high as 12.62%. That same report had data that revealed that five sectors are not back to pre-recession job levels. The Mining/Logging, Construction, Information, Manufacturing and Government Sectors have fewer jobs than they had nine years ago. An even more daunting situation is that  "The Forgotten Male Worker" is working more part-time jobs and fewer full-time jobs than they were working during July 2007, the peak of the pre-recession market. Workforce Participation for men has dropped from 74.34% during July 2006 to 68.61% during January 2017. Officially the U-3 unemployment rate for men is 5.36% NSA. Unofficially, the U-7 Unemployment rate is 12.36%.

The number of people who fall into the secondary full-time job with a primary part-time job hit a 13 month high this January. The data for the FT PT, PT PT, and FT FT data are published. The Total MJH number is published. The PT FT number is calculated by subtracting the FT FT, FT PT, and PT PT data from the Total number.  Will we see this number rise as we see Obamacare falter? Will people work for less money full-time in order to obtain health insurance benefits?

We had 7.4 million workers worker two jobs during the course of the 2016. Some months it was close to 7.2 million while other they exceed 8 million. We had 3.9 million to 4.3 million people working a full-time job and a part-time job every month last year. We had an additional 2.0 to 2.2 million people working two part-time jobs each month. When these people lose jobs there is no change in the unemployment number because they are most likely not unemployed, just lesser employed. There is no lesser employed insurance available.  The data for the Seasonally Adjusted Multiple Job Holder data for 2015 was systematically revised for every month of the year. The NSA data was untouched. To what extent? Will we eclipse 2.2 million dual PT workers during the second month of the year? Will we eclipse 2.3 million dual PT workers during any month this year? 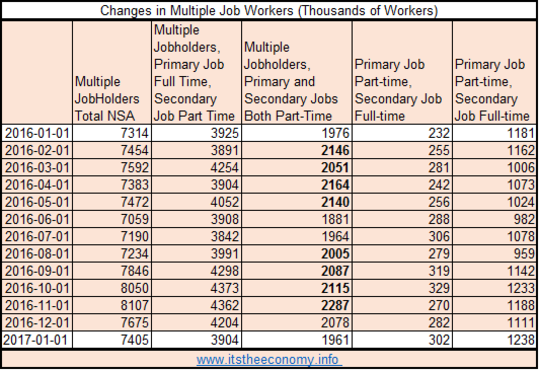