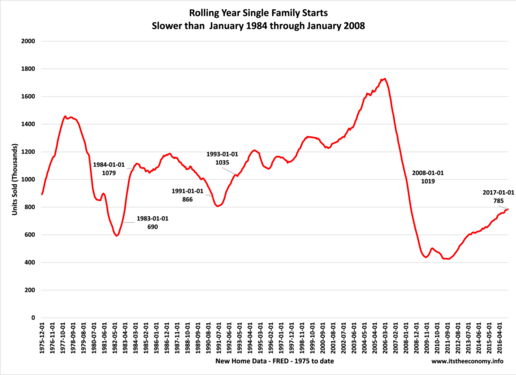 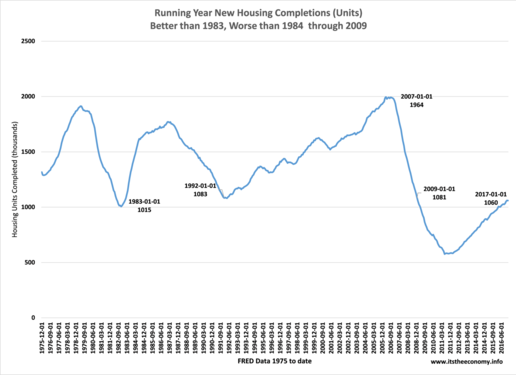 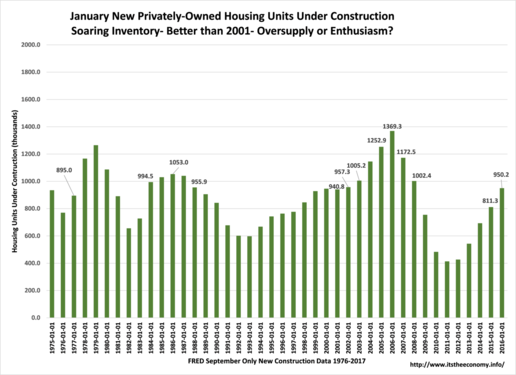 There are many "important" reports that are released during the course of the month: The Jobs Report, The Retail (MARTS) report, The Consumer Price Index (CPI) Report, and the Housing Data, new and existing homes, are the "most" important. Jobs beget sales, retail or housing. This column has addressed the housing data on a regular basis, in part because this author was a Realtor for fifteen years, and in part because it is that important. Last year our sales were better than we had seen for nearly a decade. The problem is that the data with which they were comparing it was some of the worst seen since 1975. December 's New Construction Data was lackluster. December's Existing Home data was flat. December's New Home Sales was non-plus. The new home data is stuck in the 1980s and 1990s. The existing home data has barely returned to the early 2000s. None of the data is back to pre-recession levels.

New Home Starts were better than 2008-2016, Worse than 1992-2007. One month does not make a trend. We are starting off better than we have during the past few years, so we could sell more units than we sold during the past eight years. We need starts to get the under construction data. We need under construction data to get to completions. We need completions to get to sales. We need jobs to get to sales. The data that is often discussed is the annualized data. This is the what if we grow at the pace we have been growing number.The rolling year data is better than we saw during 1983. It is also slower than every year between January 1984 and January 2008.

New Homes Under Construction Continue to Soar - Not Quite Back to 2002. This column has raised a question as to whether or not we are in a state of oversupply? If we are in oversupply then the average sales price may fall. There is some flexibility in new home prices. Upgrades may fade. Whatever the situation - we are not back to the under construction levels seen during the mid-1980s or early 2000s. This data is pretty much a rolling year graph. It also looks very similar to the starts histogram and the completions graphs.

January Completions were Down from January 2016, Slower than 1975 through 2007. Once again, one month does not make a trend. We are in recovery mode since the depth of the recession.  If we were in a classroom the past few years would have been "Fs" and "incompletes." The question is do we have years of recovery or decades of recovery still ahead of us. The Rolling Year Completions are Pathetic. We are seeing fewer completions than we saw during 1984 to 2009.

The data is the data. The two tables at the end of this column reveal the 13-month trend as well as the recent revisions to the data. This data set, as well as others, have advance numbers, preliminary numbers, and "final" numbers. Those final numbers may receive later revisions.The November starts and completions data were revised downward. The December completions number was revised downward. Slower completions may mean slower future sales. Remember that completions were comparable to 2016, so we may see that pace continue with regard to sales. Construction jobs are not back to pre-recession levels. We may see improving sentiment through construction hires, or fires, before we see the data in the new construction data or new home sales data. 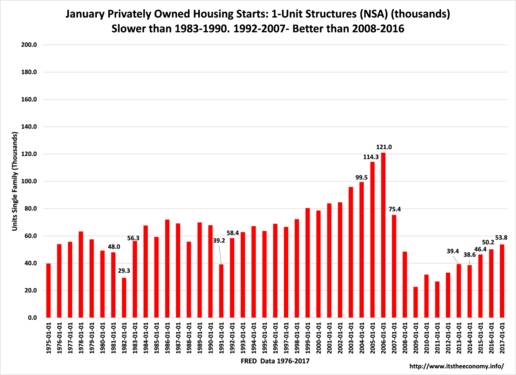 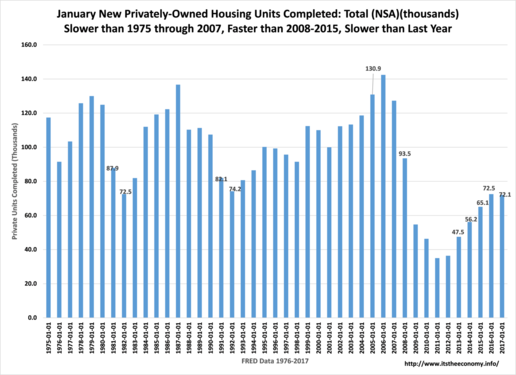