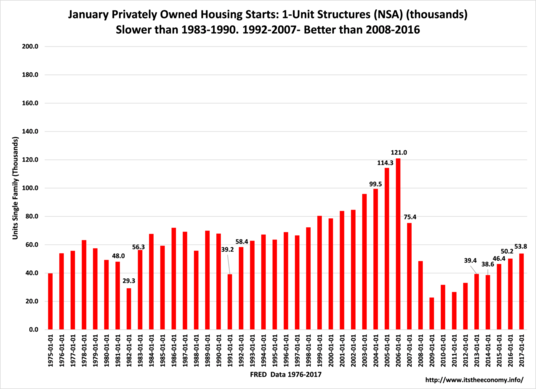 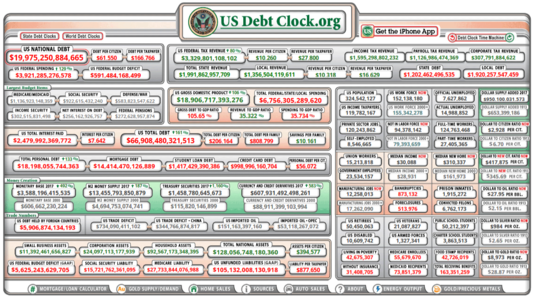 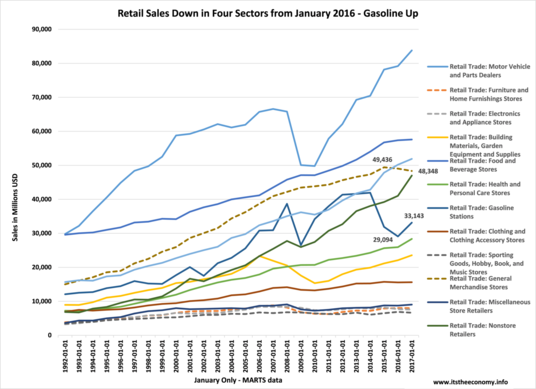 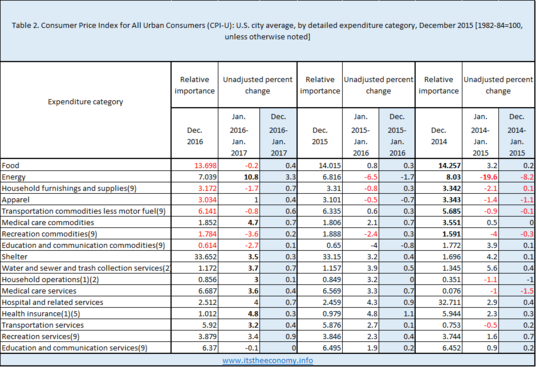 If you are watching the news or reading the paper then you know that there is a new President in the White House. You may not realize that that the government is still running and producing reports on the economy. The authors of these reports live in a seasonally adjusted, advance data, preliminary data, final data world.This week we saw the Treasury Report released, New Home Construction Data, Inflation data, Retail Sales data, and Unemployment Data. Everything except the Treasury Report has a seasonally adjusted component and a non-seasonally adjusted component.

(Feb 14) Candidate Obama was commenting on the unpatriotic and irresponsible level of debt that President George W Bush had amassed. President Bush inherited a debt of roughly $5 trillion in debt. President Obama inherited a debt of Just over $10 trillion. President Trump is starting with a Debt of $. The column 19.9 trillion. The article "January Federal Debt at $19.975 trillion" digs into the monthly treasury report. Hint: Taxes are up.

(Feb 15)  Every month there is information released on the consumer price Index (CPI.) The CPI measures the changes in prices of a basket of goods and services.   The inflation rate changes from month to month and year to year fr every item in the basket. The weighting of the basket changes every month and every year.  January Inflation Spikes, Shelter, Medicine, Energy  digs into the data and compares the basket of goods from January 2015, January 2016, and January 2017. If you feel like you have less money at the end of the month tan you did the past two Januaries you are probably correct.

(Feb 16) A regular feature of the morning news used to be the weekly unemployment claims number. A number under 300,000 seasonally adjusted (SA) first time unemployment (FTU) claims was deemed "healthy." The Obama administration was pushing a FACT regarding consecutive weeks with under 3000,000 SA FTU claims.  This data set has a similar story with the seasonal factors. The factors change week by week, month by month, season by season and year to year. The article "Unemployment Claims Misleads Us, Again" details how we could have had a number of 218,000 SA FTU claims reported as easily as the official 239,000 or a higher 251,000 claims. It's good. It is a seventeen year low. So is our participation rate.

(Feb 16)  Another important piece of data was released this week.  The Monthly and Annual Retail Trade Survey (MARTS) was released with the current month's data and the prior months' revisions. "January Retail Report's Mixed Message" examines where we are and where we have been. There was a huge drop-off in monthly sales from the Christmas levels of sales - not reported because the rest of the media covers the seasonally adjusted data. retail sales were down in four sectors compared to January 2016.  The Electronics and Appliance Sector and the Furniture and Furnishing Sectors have not returned to pre-recession levels.

(Feb 17) The most misunderstood and misrepresented data, other than the Jobs number, is the data relating to housing. We are doing better than we were doing at the depth of the recession of 2009. The problem is that new construction data is still worse than what we saw after prior recessions, plural. The Housing starts are no longer failing - they just are not getting a grade better than a "D." The same could be said regarding the completions data. "Weak January New Construction Data" examines the non-seasonally adjusted data and the revisions.