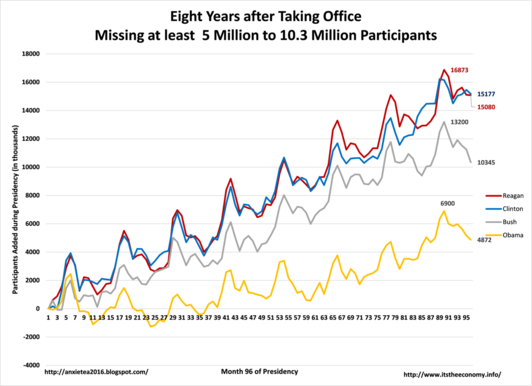 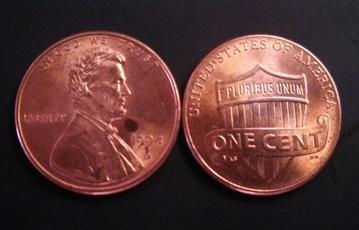 President Obama's final Jobs Report was released Friday February 3rd. The rest of the media was claiming this was President Trumps first jobs report. The data used for the January Jobs report was collected through January 12, 2017. The inauguration was January 20th. If you thought that there must be more to the Jobs report an the number of seasonally adjusted "jobs" added to the economy and the unemployment rate then you are correct. This column invests a ton of time and effort into analyzing the data. It starts with the Jobs Report Forecast column. The purpose of that is to prepare the readers for the possibilities, including the growth rates anticipated, the seasonal factors used to convert the recorded non-seasonally adjusted data to the reported seasonally adjusted data, and the notion that the prior month's data may be revised downward to "boost" the current month's data, as was done during the Month of May 2016. The January Jobs Report Review Column, titled "Bogus January Jobs Number,"detailed how the rate of contraction was better than expected and how the seasonal factor distorted the "jobs" number. That was a week ago Friday.  This week this column dug into the data and found some interesting items for discussion.

(Feb 7) This has been an uneven recovery . Not all job sectors have recovered to pre-recession levels of jobs. "Five Sectors Still in Recovery" details how every sector lost jobs during the month of January, how this job loss is normal, and how the Mining and Logging Sector, the Construction Sector, The IT Sector, the Manufacturing Sector and the Government Sector are not back to January 2007 levels of employment. It also details how the 2016 data was revised between the December report and the January Report.

(Feb 8)  This column has been inspired to research topics based on memes on Twitter. One of those memes was the genesis for a November 2014 article titled "War on Women? Men lost 744,000 jobs during the month of November." This led to the creation of a regular feature of this website and its parallel website. This month  the article "The Forgotten Male Worker" detailed how there have been over 10 million male workers added to the workforce population since July 2007. The problem is that there are 1.6 million fewer full-time jobs for men and 1.8 million more part-time jobs for men. We need more than 177,000 jobs for 10 million male workers over a period of 9.5 Years.

(Feb 10) There has been some discussion in the media that the reason why we are seeing a drop in the participation rate is because people are retiring and are still being counted as a part of the workforce population. They must not have read "The Forgotten Male Worker" or its predecessors. There is an interesting trend that is observed through the changing data over the past thirteen years. Some age groups, when tracked in five year intervals, are doing better than others. We are also seeing participation in the over 60 age groups increasing since the Great Recession. "The Aging Workforce - Class of 2007" tracks each age group and finds that we have a failure to participate.

This column digs into the data and produces articles that give a slightly different perspective on the news. There is more to the Jobs Report than the headline number or numbers. We cannot seasonally adjust our income. Why should we trust seasonally adjusted data from the government? This was the final Jobs Report for President Obama. He ignored the first year in office and based his jobs streak on seasonally adjusted data starting at the bottom of the recession. Will the mainstream media allow him to start his statistics from the bottom of the economic cycle that he has inherited? It is possible that we are 6 months into a jobs recession. Will we pull out or continue to see worker growth at less than 1.5% and Less than 1%? Time will tell. 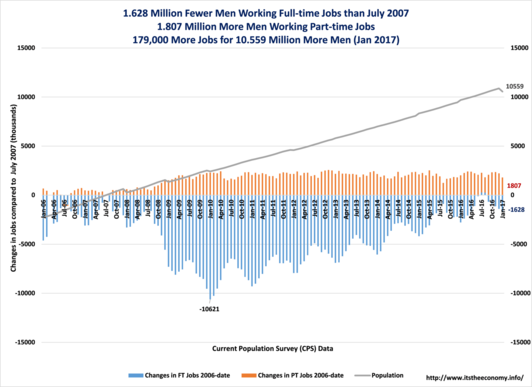 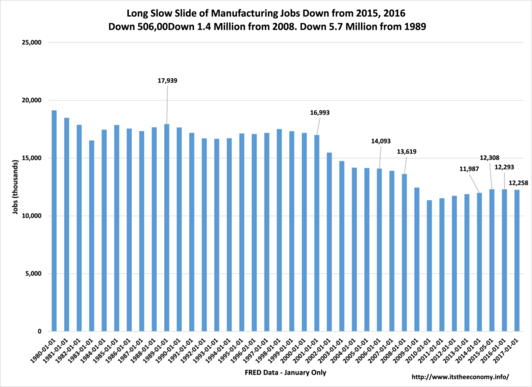 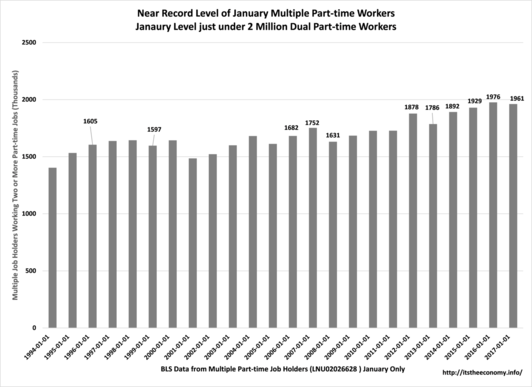