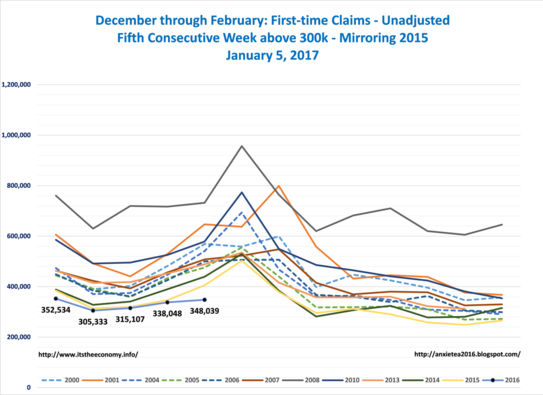 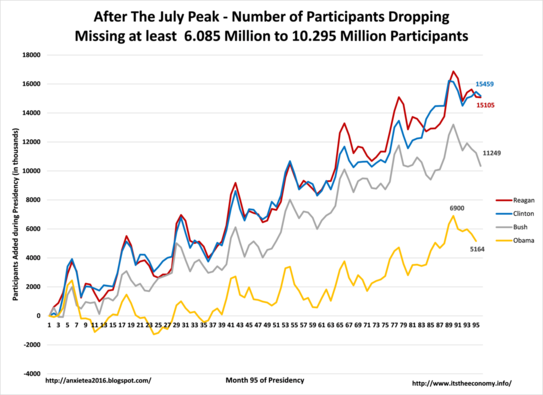 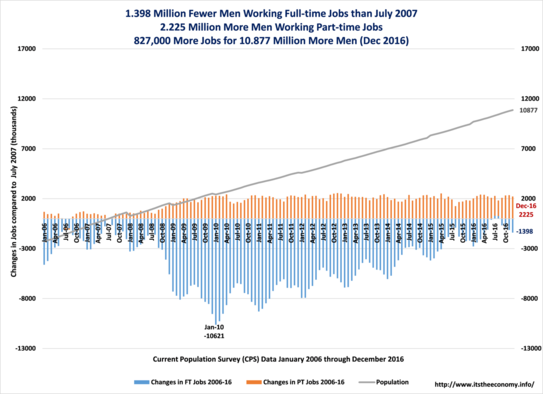 Every month there are a series of columns written. Whether it is the monthly jobs report forecast article or the monthly job report result article, or the follow-up columns pertaining to men and women in the workforce, the level of dual job workers in the workforce or comparing the Four most recent two term Presidents at the same point in their Presidencies, the data keeps rolling and the articles keep flowing. Sometimes one column strikes a chord month in and month out. The month of January provides a unique opportunity for multiple "week in Review" columns, a "Top Ten Columns of December" columns and a "Top Ten of the Year" article.This column covers more than just the Jobs Report. Other items that are regularly presented in this column have to do with housing data, the consumer price index data, retail sales, and the weekly unemployment claims report. The following were the ten most popular columns for January 2016.

(Jan 2) January saw the publication of two forecast columns regarding the Jobs Report, one on the jobs numbers, unemployment, participation, and workers, as well as a column on the multiple job holder situation.  The question was raised as to what impact the elevated levels of people working two jobs would have on the jobs report. The column "Potential December Surge in Multiple Job Workers" reported that we saw month to month increases and December to December increases in multiple job holders last December and that we could see a similar annual increase in multiple job workers if we just maintained the levels we had during November.

(Jan 1) The Top Ten Columns of December was one of the top ten columns of January.  The top ten columns of December focused on the Employment Situation Data, Housing data, and the unemployment reports.  The top column was one that revealed that men were working 1.1 million fewer full-time jobs than they were working during July 2007.The second column was the one that compared the four most recent two term Presidents at 94 months in office. There were three columns that focused on the distorted weekly unemployment claims numbers, all of which recounted how the consecutive week streak of seasonally adjusted first-time unemployment claims never really started until 2016 and ended during November of 2016.Throw in a review of the November jobs report as well as columns on the existing and new home data.

(Jan 1) The beginning of a year means that there is a "Top Ten Columns of the Year" article. The columns that received the most page views this year were primarily released during January and February of 2016. The January and July Report articles were two of the top ten. A column detailed the "Gang of 22" column against President Elect Donald Trump was the most read column. There were also considerable interest in the columns that focused on the State of the Union. The Top ten column also includes links to all of the columns written during 2016 by month.

(Jan 11) There was a "war of women" rallying call during the 2012 election. What was ignored during that time was that men had lost more jobs than women during the Great Recession. The column "More Men Working Part-time, Unemployed than July 2007" details how women have recovered faster and better than men. It details how men are working 2.2 million more part-time jobs and 1.4 million fewer full-time jobs than they were during July 2007.

(Jan 14) The week following the release of the monthly Employment Situation Report, or Jobs Report, is often a slow week for data. This affords the opportunity to dig further into the numbers. There is more to examine than the Current Population Survey (CPS) Jobs Numbers and the Unemployment and Participation Rates. There is more to examine than the Current Employment Statistics (CES) Private Sector or Non-Farm Payroll Worker Numbers. There is the total number of jobs created by the President, the total number of unemployed workers, and the missing participants, There are the number of people working multiple jobs. There is a sector by sector analysis of the incomplete recovery. We can examine how man and women are performing in the recovery. We can even examine the jobs and unemployment situation by gender. The week in review column is here.

(Jan 9)  The week started with a comparison of the four more recent two term Presidents at the 95 month mark during their Presidencies. The data for the jobs report is collected by the 12th of the month, so President Obama has one more jobs report to add to his record. Readers of this column understand that the participation rate has an impact on the unemployment rate, and the other way around. Unemployed workers are participants. The Deceptive December Jobs Report revealed Non-Seasonally Adjusted (NSA) Full-time job loss,NSA Part-time Jobs Loss, an increase in the number of unemployed workers, and a decrease in the NSA CES Private Sector worker number.We saw a drop in participation. If the unemployment rate and participation rate at the 95 month mark for President Obama is compared with Presidents Reagan, Clinton, and Bush it is found that we are missing 8.3 million to 11.6 million participants and that the effective unemployment rate is between 9.75% and 12.12%.

(Jan 7) This week was a fairly normal first week of the month with the release of the weekly first unemployment claims report and the monthly employment situation report. It also meant that there was a month of review to be done with the top ten columns of December and the top ten columns of 2016. The Employment Situation Report released yesterday was the second to last jobs report for President Obama. The data for the month of January is collected through the 12th of January. The week in review summarizes these columns.

(Jan 5) Thursday we saw the release of the Weekly Unemployment Claims Report. Did we have 235,000 seasonally adjusted (SA) First-time Unemployment (FTU) claims or 262,000 SA FTU claims? It depends if you use this year's seasonal factor or last year's. Others are reporting that this is the lowest SA FTU claims in a generation - the reality is that we had 348,039 non-seasonally adjusted (NSA) FTU claims last week and thatthis is the fifth consecutive week with over 300,000 NSA FTU claims.

(Jan 26) How many ways can you say lackluster, flat, unenthusiastic, ho-hum, or unremarkable? December was a lackluster month for new home construction and for existing home sales. The same could be said for the new home sales data. The units sold have been fairly consistently better than prior years, month after month. The problem is that where the media is saying that it is the "best in almost a decade" forget that it is worse than we saw during the 1980s, 1990s, and early 2000s. The housing market is getting a "D" where it used to get an "F."Remember that all real estate is local, community, school district, neighborhood or condominium complex,  as you read "Non-Plus December New Home Sales Data." The national picture is a 30,000 foot level view.

(Jan 24) New home sales are a huge stimulant to the economy. New Construction provides jobs for builders, electricians, plumbers, drywall people, carpet companies, painters, landscapers, and retail people. New homes need new or newer furniture, new appliances, new electronics, and new knickknacks.  We need to have housing Starts to get housing units under construction. We need units under construction to obtain completions. We need completions for sales. We are recovering from the worst housing recession of the past 40 years. We are in a recovery mode. We have a long way to go to get to an expansion mode. "December New Construction Lackluster" details how the data was strong compared to 2008-2015 and is still historically weak.

If there was one word to describe the December data is would be lackluster. January is going to be a rough month. The "Jarring January Jobs Forecast" article details how unemployment should rise, employment should drop, the non-seasonally adjusted  private sector worker numbers will fall, and the participation rate may hit a 39 year low if the NSA participation rate hits 62.1%. This is President Obama's final "report card." He is already in fourth place for participants added to the economy. Will the Jobs recession gain speed or will the thought of a new "pilot" pull the economy out of a steep descent? 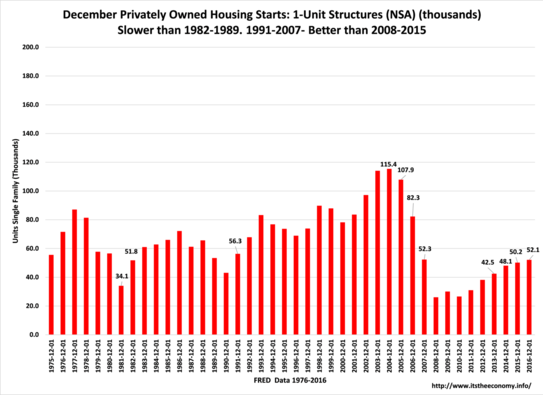 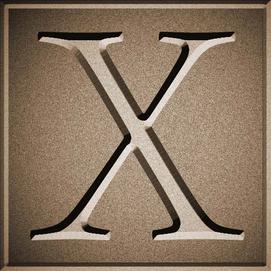 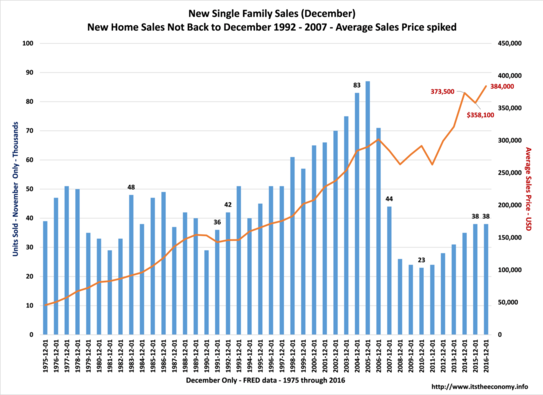 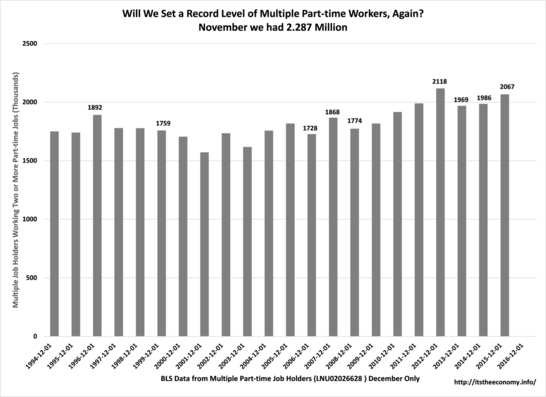